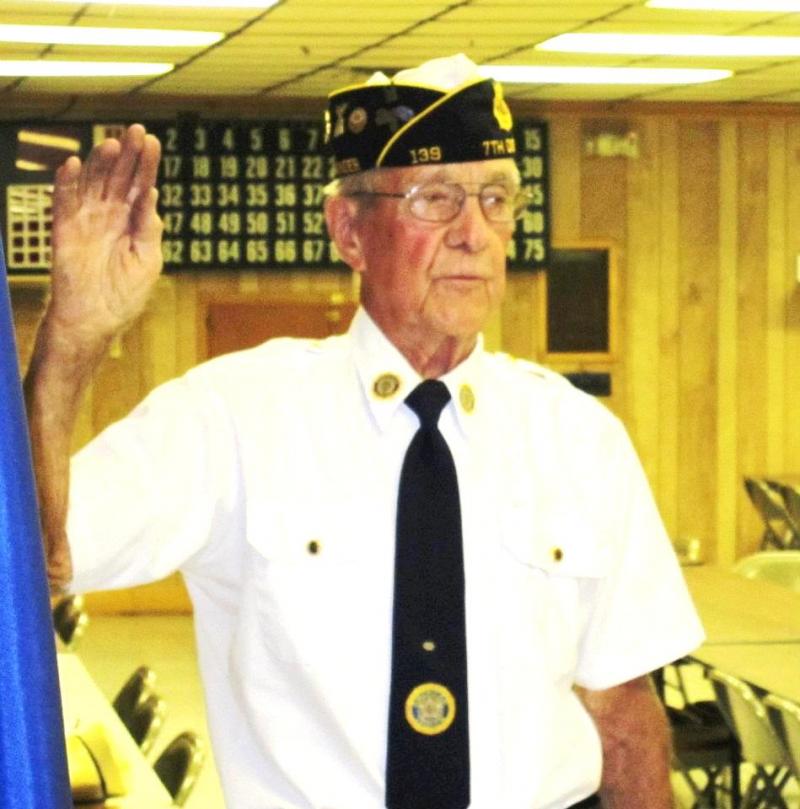 Imagine if you will temperatures of negative 10 degrees with winds whipping causing the wind chill to become minus 29 degrees. Now imagine yourself standing in a row of comrades, outside, waiting to pay respects as part of the funeral detail of one of your own, Hurley Gallion, Past Commander of the Sullivan American Legion Post 139.

Sonnor Faught doesn’t have to imagine, he was there. He has been performing his duties for years and through rain or sleet or heat or snow, he performs on command, when requested in honor of those who defended this land. He has put forth countless hours of gestures of good deeds for the families bereaved and help to bring comfort and closure to what had been achieved. He has never wavered in fulfilling the duty of such a posthumous honor. He has never failed to be there for the families, friends, and comrades. He may no longer wear the “Uniform of the Day,” but he has never forgotten a fallen comrade or the families when comfort is needed.

At the young age of 87 Sonnor Faught, Past Commander, still serves in the Honor Guard of the American Legion Post 139. After serving for 31 months in the Army Air Corp during WWII he arrived back home at the age of 21. It didn’t take him long to become involved with the Honor Guard along with his father Amos who had served in WWI. His first detail was Owen Ellis, whose body was brought home after WWII was over. And he’s been doing it ever since.

In talking with Sonnor I realized that serving as an Honor Guard you have to have stamina. There was a time when he, along with the other Guards, stood for 2 hours and 20 minutes. They were to meet at 1400 hours and did not leave the cemetery till 1620 hours.

Even though it’s a somber occasion, you have to have some humor and leave the pride at home. When you’re standing in line waiting, it’s cold, and you’re using bolt action rifles, things just happen. The call for the volley comes and the 1st shot goes off without a hitch, call for the 2nd volley comes and not one gun goes off. What can you do? Call for the 3rd volley and hope the guns go off, which they did. No one can explain why all guns froze on the 2nd shot.

Then there is the playing of Taps. Taps normally play when the computerized bugle is functioning. There again, pride is left at home when the battery has run down and there was no Taps played.

There is pride though when you are paying your respects and you realize that 32 Honor Guards and Legionnaires, with Caps, are in detail. Such was the case of Woody Sutton. A most memorable occasion and pride for Sonnor.

Sonnor took over the record keeping of the Honor Guard, which is made up of men from the Sullivan and Shelburn American Legions and the local VFW in 2006. Since then he keeps track of who, when, and where and ensures the Honor Guards are in place. He has done this for approximately 396 funerals. At age 87, I don’t foresee Sonnor Faught giving it up till his final Taps are played.