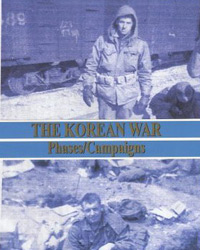 A longtime member of American Legion Post 1 of Omaha, Neb., John Dickinson started his Legion affiliation when he was a delegate to South Dakota Boys State in 1942. He needed money to buy the new pair of pants he wanted. So he drove to Fort Omaha and joined the Marine Reserves. They paid $50 a month.

“I paid for that decision,” Dickinson said. “I didn’t know there was going to be another war!” He was one of approximately 404,000 Americans who fought in both World War II and Korea, according to a researcher at the Korean War National Museum. Many of those double-duty veterans simply stayed in the service after World War II. Others, like Dickinson, enlisted twice.

Dickinson, who fought on Iwo Jima in 1945 during World War II, was called up from the Marine Reserves to fight in Korea. By 1951, the Omahan was back in combat. This time, he was 26 instead of 19. This time, things were even worse.

“Korea was awful,” he said. The battles might not be as big or as famous as the earlier ones, Dickinson said, but they were equally vicious. What made it awful was the day-to-day difficulty of Korea, he says. The constant walking. The hilly terrain. The freezing nights. For much of his Korean tour, Dickinson slept in a sleeping bag in a foxhole. He suffered from frostbite, and it still caused him foot problems in later years.

Dickinson was rotated out of Korea in August 1951 and resisted the urge to rejoin the regular Marines and try to become an officer. “I had done my duty, and I had had enough,” he said. “I was just glad to get out of Korea.”