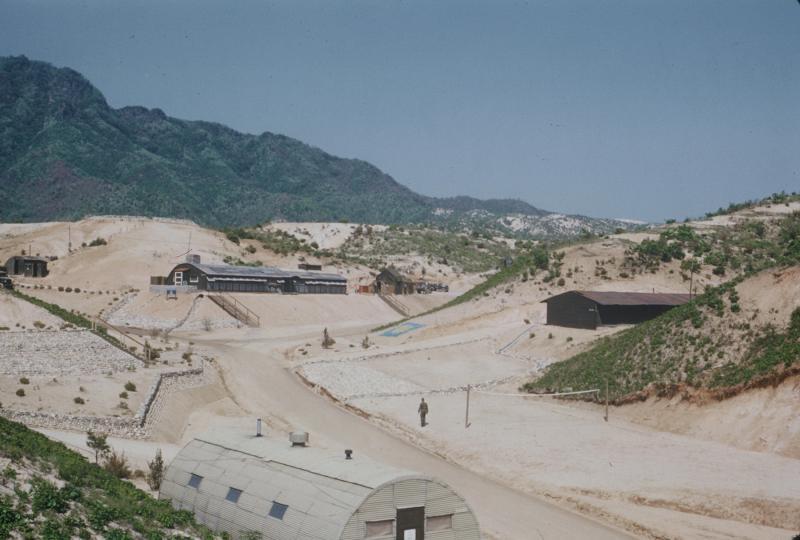 An article in The American Legion Magazine of March 2017 suggested: “We should make it our mission to collect and archive the accounts of all veterans before their memories are lost to time.” My name is Ralph Barreras, born, raised, educated, worked and now retired in Belen, N.M. I would like to submit the following story on my 13 months in Korea in 1953-1954. I was a PVT and a PFC there. I did retire as a SGM after 38 years in the USAR. The emphasis of this story involves communication--keeping the troops in our area informed on what was happening in the rest of the world apart from us.

A brief background is my arrival in Korea in April 1953. I was assigned to a company, 60 mm and 80 mm mortar platoon, at Chorwon, bottom left corner of The Iron Triangle, about 18 miles northwest of the 38th parallel. Hostilities between North and South Korea ceased in July 1953. We were told to quickly move men and equipment to an assigned location about five miles south of the 38th parallel. We encountered complete devastation in the south, as in the north, in the valleys and in the mountains. Only narrow paths and dirt roads existed; no rail, no pavement, no bridges. All of us in the north--all units--struggled mightily to move rifles, carbines, pistols, ammunition, bayonets, machine guns, mortars, cannons, tanks, trucks, jeeps, small tents, lean-to tarps, small items of medical supplies and personal equipment south as best we could. Traveling quickly south was difficult. Almost all there had to be built new or rebuilt--quonset huts, tents, wider roads, electricity and more.

The main reason for this story is communication. I do not know for sure, but I’m going to say that hundreds and hundreds of miles of “commo” wire was strewn on the ground and evident probably everywhere in Korea from south to north and west to east. We simply let it lie. We didn’t try to roll much of it into trucks to take back--it was too much. That was communication for other purposes, too. The “land lines” of the Korean War from 1951 to 1953 was commo wire on the ground--no telephone poles, no towers. Squads, platoons, companies, battalions, divisions used commo wire to communicate over two telephones, one sending and one receiving. Just a note here, we competed among ourselves as to who could build the “most comfortable hammock” and other “convenience” articles from commo wire--it was that abundant in our area and probably all over Korea.

In peacetime after July 1953, troops had to be informed on news from around the world--especially from the United States. Word went out to companies--probably division-wide--if there was someone who knew how to type rapidly. I knew I could because I was quite proficient in high school. I submitted my name through proper channels, and to my surprise I was interviewed and asked to show my ability to type fast--very fast, as a matter of fact. I was accepted, and I requested to stay with my same unit and same comrades. My request was approved. I was told what I would be doing. Tokyo would be transmitting world news, mainly U.S. news, by radio to units in South Korea. I was given a Zenith Transoceanic transistor radio that worked on batteries or electricity. Batteries it was, because there was no electricity available for a few months. My small unit of eight people were given a manual mimeograph machine and several gallons of ink for the drum. And we were supplied with reams and reams of paper that were used daily.

Every morning Monday through Friday at 8:30, someone in Tokyo broadcast on a certain number on the dial with news of the world, American news, sports and other various subjects. The person spoke at about 12 words a minute. I typed the given headline and the accompanying message. I typed onto a stencil. My description of a stencil is that it is legal-size in length. It is of thin rubberized and flexible material that will accept a sharp typewriter letter key striking it and cutting into it the exact size of the key. The stencil would not pull apart or separate or be damaged. That size would accept ink through it. I set the margins on the typewriter to type top to bottom one column. At the end of the first column I would take the stencil out and insert it in again and reset the margins to type a second column top to bottom. I learned on the job. Monday through Thursday I used only one stencil; that was enough. On Friday I filled the one stencil and I started and easily typed a second stencil. Every day enough news was transmitted for 45 minutes to fill two stencils. A stencil is durable because it is rubbery and can absorb wear and tear. But there can be a typewriter key tearing a tiny section outside the key indention, and it can become a defective stencil that cannot hold up to 4,000 turns of the handle. If a letter begins to tear and more ink goes onto either side of the size of the letter, it then becomes a blob of ink and it gets bigger and bigger. The answer to that was that I typed a second stencil copying from a completed sheet, and being able to type easily at about 65 words a minute, another stencil was always ready, if needed. The typewriter was set to “stencil;” no ribbon, just the key striking the stencil.

It was absolutely amazing what one typist, one manual mimeograph machine, several quarts of gooey ink in the drum could produce. Four days a week 4,000 copies were turned out by hand. One day a week, Friday, 8,000 sheets were produced--one by one, one by one. The guys took turns to turn the handle of the mimeograph those thousands of times. They also cleaned the drum. We needed transportation to distribute our “newspaper.” Two trucks went out daily; a driver and a helper, for approximately a 15 or so square mile area, I was told, to our Infantry Division personnel.

To end this story I will say that in ‘53-‘54 it was slow and laborious to get 4,000 sheets of news out to our troops in a country devoid of more modern things. One radio transmitting at 12 words a minute, the click-clack of one typewriter, one manual mimeograph machine, lots of messy ink, lots of legal-size paper, six guys tending to that messy machine, and having to clean it constantly, turning the drum 4,000 times a day, to vehicles to deliver a good-looking “newspaper” to about 15,000 men every day, five days a week, in about six hours or so. That was amazing what we could do in six hours. That was then. Now we are in the year 2019; technology sends out information today in many languages to billions of people around the world in seconds. THAT is amazing!

In the eight months that I did the job of being the “editor” of a rudimentary newspaper, I never sent a copy home to remind me 66 years later of what I did in South Korea. I kick myself even now. If a reader of this story has a copy of a newspaper of those days of publication, please let this magazine know. If a member of some other division who may have read a sheet of paper in their unit known as a newspaper which was done by what I did in my Infantry Division in the years 1953-1954, let this magazine know either by an actual newspaper or by an account that you remember reading something that looked like a newspaper. That would bring back thousands of memories to many thousands of troops. By the way, I asked if I could “borrow” the Zenith Transoceanic radio while I awaited transportation down several hundred miles to Pusan to board a ship back to San Francisco. They didn’t accept my request to “borrow” the radio. I had to turn it in to the Orderly Room. I can only speculate on what happened to that beautiful, strong, large radio. It was ultimately probably “borrowed.”

All these things happened as I walked along mountains and valleys, mountains and valleys, for 13 months in North and South Korea in 1953-1954, 66 years ago. I am not a journalist, not a writer, not anything. I just did my job. The only thing I brag about now is that I saw Marilyn Monroe sing two quick songs. She came in quickly in a tank and was gone again in the tank. We went crazy. A month or so later Cardinal Spellman came to celebrate midnight Christmas Mass; we simply prayed.