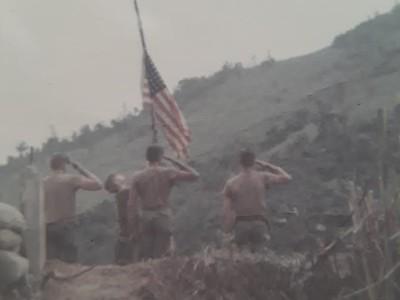 THEN IT WAS TIME
The Events Behind The Photos

The night prior to these photos being taken, it had been a very busy night - 100% alert. The four Marines are with a weapons platoon, 3rd Battalion, 9th Marines, 3rd Marine Division. They are all teenagers. Their squad leader, “Corporal Mac”, all of 21 and also called “Pops”, had been reluctant to fly the flag. His considerations: only one of the two machine gun placements were real. Only two of the three 81 mm mortar gun pits were real. Of course all the Marines had their M-16s. So 10 Marines, on a bridge on Hwy 9, between the Rock Pile and Khe Sanh, with orders “to hold that bridge," some guns real and some not, with recent memories of a 28-day siege period at Con Thien ... and in front of their position nothing but green, green and more green. One “click”, two “clicks”, 10 “clicks”, nothing but green. And beyond that, the DMZ and all the NVA your drill Instructors ever talked about .The Marines knew their squad leader had a flag he carried with him. They asked him about “raising it.” After considering the above, he thought “not”. Yet when he said, “Look, we don’t have anything to put it on, nothing to raise it with" - they would not be deterred; they made a “flagpole." And so Pops says, “OK, OK, guys, here’s the flag ... and God help us." In a half-circle, to the back of the squad leader taking these photos, are five Americans, Marines, facing this huge green jungle, "locked and loaded."
Then it was time.
Their backs straight, their arms at a precise angle, their hands poised, and then the salute. It was over in a second. Now the 5 Marines out front turned, stood, saluted, and then quickly assumed their defensive positions. This Independence Day we celebrate our freedoms. And as long as we have an Army, Navy, Coast Guard, Air Force, Space Force and Marine Corps like those in these photos, who have stood tall in war and peace time, who have made sacrifices you’ll never hear of, who would make you so proud if you only knew, we will continue to celebrate our Fourth of July.