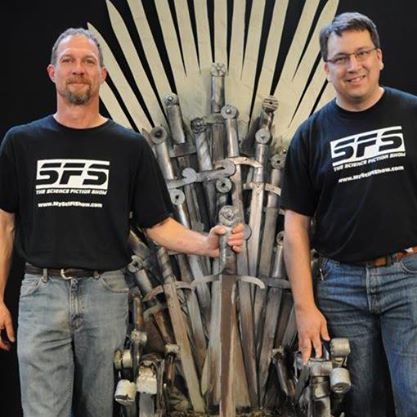 As boys they dreamed of being superheroes. As men, they served their country fighting alongside their brothers and sisters. Today, they have returned to the realm of superheroes and have fulfilled a lifelong dream.
Jason Tudor and Keith Houin, two retired Air Force master sergeants, recently finished work on their comic book “Vorpal.” Tudor, who lives in New York and works for the Department of Veterans Affairs, wrote and illustrated the comic. Houin, a Legionnaire who lives near Mons, Belgium, works as a public affairs specialist for U.S. Army Garrison Benelux and co-wrote the comic. The book is published by Headshrinker’s Press, based in Cincinnati.
The 28 pages of “Vorpal” are a culmination of things incomplete since a visit Tudor made to the Lemon Grove Book Store in Southern California. As a teenager, comic books were undergoing a period of change, with many independent publishers rising up to challenge Marvel and DC Comics’ place at the top.
“And there were all these really wonderful titles that inspired me and others to think about a career in comics,” said Tudor, who grew up a U.S. Navy brat in Southern California. “Something flipped a switch and I knew that’s what I wanted to do.”
His path, however, changed and he joined the Air Force in 1987. Instead of panels filled with ink and color, Tudor focused on his career in military public relations, where the military and others honored him as a writer, photographer and illustrator and, later, as a civil servant. Still, comics were close to him.
“I enjoyed my military service a great deal and wanted my energy to go into serving my country. Drawing and writing comics were still a hobby,” said Tudor, who ended up serving for 21 years.
The U.S. military has a strong tie to comic books. Most notably, U.S. Army veterans Will Eisner, who created comics for training purposes from 1942-1945; Jack Kirby, an Infantryman from 1943-1945; and Stan Lee, who served in the Signal Corps.
Tudor met Houin as a result of his military service. Houin, too, had been infected by the pop culture bug, collecting comics, trading cards and, later, selling them. The two met shortly before they retired from service and realized they had similar interests.
“We just clicked,” Houin, a 24-year Air Force veteran, said of his relationship with Tudor. “We always wanted to do something together and, eventually, that something became ‘Vorpal.’”
"Vorpal" grew from an idea Tudor had in 2010 of a future-based assassin whose journey turns her from killer to messiah to conquer a kingdom and save a galaxy. After some early visualization treatments from artists in Australia and elsewhere in the United States, the project began in earnest in late 2014. Final illustrations wrapped up in October 2015.
Unlike many comic books, Tudor and Houin made finished pages available online each week. Now those first pages have been collected into a printed edition. Houin said there is new artwork and revisions to the print version that are unavailable online.
“We had an outline and we started writing the scripts. The initial stuff stunk and we knew it. We eventually revised until we got somewhere we liked. The first issue reaches that goal,” Houin said.
“It’s exciting to hold that first issue in your hand; the end of the first part of the journey, but that’s not the end of the journey,” Tudor said. “Just the start, really, and we hope people will join us as we go along."
If they stick with their plan, Tudor said there are about 300 pages of “Vorpal” outlined, about another 14 comic books' worth. Of those, three more are fully scripted and will be drawn over the next 12 to 18 months, and will wrap up the first story arc for the book. All of this is done while Tudor and Houin continue to work full-time jobs and raise families.
Nichi Hawkins, co-publisher for Headshrinker’s Press, said he and partner Landon Faulkner welcomed “Vorpal” to their line of comics with open arms.
“We were excited by the project and where it could go. Plus, it fit into our larger goal as an independent small publisher,” Hawkins said. “'Vorpal' rocks and we’re excited to see another great comic book join our family.”
Print and digital copies of the comic are available from Headshrinker’s Press at www.headshrinkerspress.com.