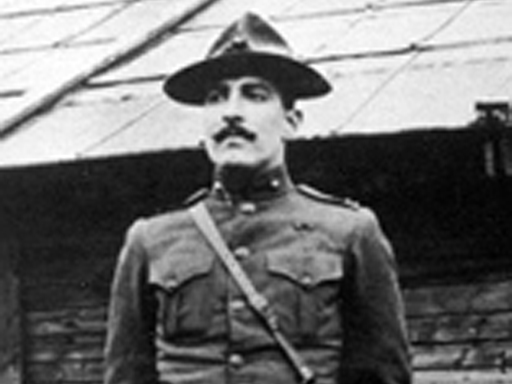 America entered World War I to reinforce the battered French and British troops waging a desperate fight against Germany. On June 2, 1918, a division of Marines was sent to support the French army at Belleau Wood. As the Marines arrived, they found French troops retreating through their lines. A French colonel, attempting to acquaint the Americans with the realities of the situation and not trusting his spoken English, scribbled a note to the officer in charge of the Americans ordering them to retreat. The Marine officer looked at the Frenchman coldly and said, “Retreat, Hell! We just got here.” That officer was Capt. Lloyd W. Williams, commanding the 51st Company, 2nd Battalion, 5th Marine Regiment. Williams would die in Belleau Wood nine days later, blinded by gas and gutted by German shrapnel. He was the first Clarke County man killed in the war.
Lloyd Williams was born at “Nottingham” in Clarke County on June 5, 1887. He was the eldest son of Goodwin Hulings and Anne McCormick Williams. He passed his boyhood years in Berryville, attending private and public schools here. He later moved to Washington with his family, where he graduated from Western High School. In 1907 he graduated from Virginia Polytechnic Institute, where he was a member of the Corps of Cadets. Shortly after graduation, Williams was commissioned as a second lieutenant in the United States Marine Corps.
As a career Marine officer, Williams served the typical tours of duty of the time. These included time in Cuba, the Philippines, sea duty aboard American battleships, and time at the Marine Corps Headquarters in Washington. Upon the outbreak of trouble in Nicaragua in 1912, he was sent there and saw his first combat action in the capture of the city of Leon. He rose quickly up the ranks and was commissioned a captain in 1916.
Immediately after the United States entered World War I, the 5th Marine Division sailed for France. Williams was assigned to command the division’s 51st Company in the 2nd Battalion. On June 11, 1918, he led an assault that routed the German defenders at Belleau Wood. Of the 10 officers and 250 men who started the attack, only one officer and 16 enlisted men escaped death or injury. As Williams lay wounded on the battlefield, he told the medics who approached him. “Don’t bother with me. Take care of my good men.”
The injured Williams was later evacuated to a medical station, where a young Navy doctor fought to save his life despite exploding artillery shells and a gas attack. Williams died of his wounds that day. For their heroism, the doctor was awarded the Congressional Medal of Honor and Williams was posthumously promoted to major and awarded the Distinguished Service Cross. He was buried in a military cemetery called a “Flanders Field” near the battlefield.
Even though the Battle of Belleau Wood took a heavy toll on the U. S. forces, it marked the turning point of the war for the allies. It stopped the advancing German army and broke its will to fight. Germany surrendered to the allies and an armistice was signed on Nov. 11, 1918.
In 1921, Williams’ family arranged for his remains to be returned to the United States for burial in Green Hill Cemetery in Berryville. Local and national newspapers reported the progress of his casket as it was loaded onto a Navy ship in France; its arrival in New York where Gen. Pershing eulogized Williams; and its shipment by train from New York to Washington and finally to Berryville. A military honor guard from Quantico Marine Barracks escorted the coffin the entire trip.
On July 21, over 1,000 people lined the streets of Berryville to honor him. The casket arrived by train and was loaded onto a horse-drawn caisson for the procession to Grace Episcopal Church, where he lay in state before the funeral service. Since the church could not hold the large number of mourners, the doors and windows of the church were opened and hundreds of people circled the church to listen to the funeral service. After the church service, the funeral procession was led by a detail of Legionnaires from Lloyd Williams Post 41 of The American Legion to the burial site in Green Hill Cemetery.
Captain Williams was not just a local hero. His heroic actions and fearless leadership were widely reported in major newspapers throughout America and Europe. The 2nd Battalion, 5th Regiment is the most highly decorated battalion in the U. S. Marine Corps and its motto is still “Retreat, hell!” in honor of Williams. In 1957, Virginia Tech named a dormitory in honor of Williams; Major Williams Hall was later converted to a faculty office building.
On Sept. 12, 1919, a charter application for an American Legion post in Berryville was submitted. It was to be named in honor of Capt. Lloyd W. Williams, the first Clarke County man killed in World War I.

Submitted by:
Robert A. Ferrebee