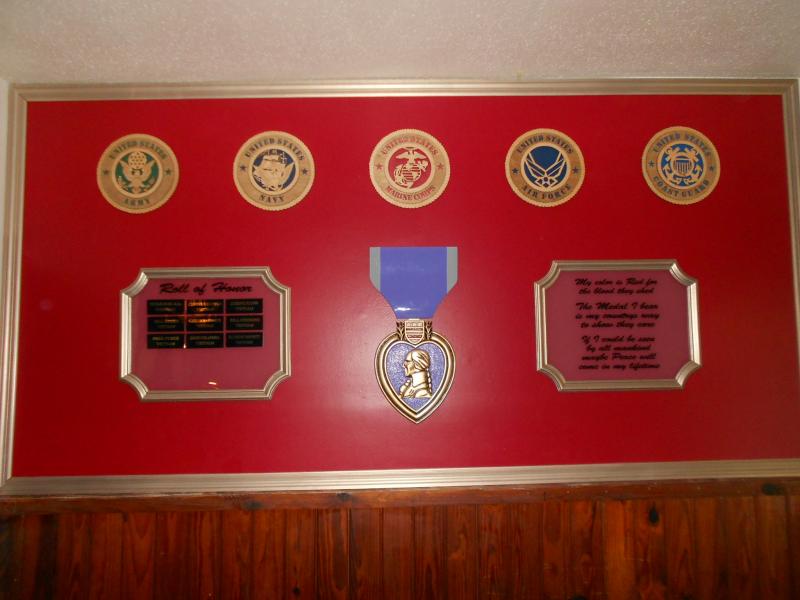 On Nov. 11, 2013, Veterans Day, a Purple Heart Wall was dedicated to thank our soldiers who gave their all and those soldiers wounded in service to this great nation. American Legion Memorial Garner-Grant Post 101 of Bushnell, Fla., welcomed the community to celebrate with them both the unveiling of the Purple Heart Wall and the 75th anniversary of being chartered by the national organization in 1938.

Angelo, taking the podium again, welcomed all veterans and their guests. He explained that the Purple Heart Wall is in honor of the post members and South Sumter servicemembers who gave all and those who gave more than some.

Before he unveiled the wall he described it to everyone in this way: “It is red for the bloodshed, the pain and heartache of families, mothers and fathers, brothers and sisters of those who made the supreme sacrifice. It is framed in gold to represent honor and courage. A replica of the Purple Heart medal is in the center. A plaque to the right of the Purple Heart replica has the following inscription:

My color is red for the blood they shed.
The medal I bear is from my Country to show it cares.
If I could be seen by all mankind,
Maybe there would be peace in my lifetime.

To the left of the Purple Heart medal is a plaque with the inscription:

Each name was read. The family of Michael Mahr and the wounded-in-action veterans took their place in front, accompanied by Rolfingsmeyer. Then spontaneous applause erupted as the community rose to their feet to honor our Purple Heart recipients. After everyone was seated Angelo gave the order for Lanning to come forward and remove the cover from the POW/MIA chair. The second order from the commander to the sgt. at arms was to remove the cover from the Purple Heart Wall.

The rest of the evening was a celebration. The American Legion post served a steak dinner. The veterans' meals were free to thank them for their service.