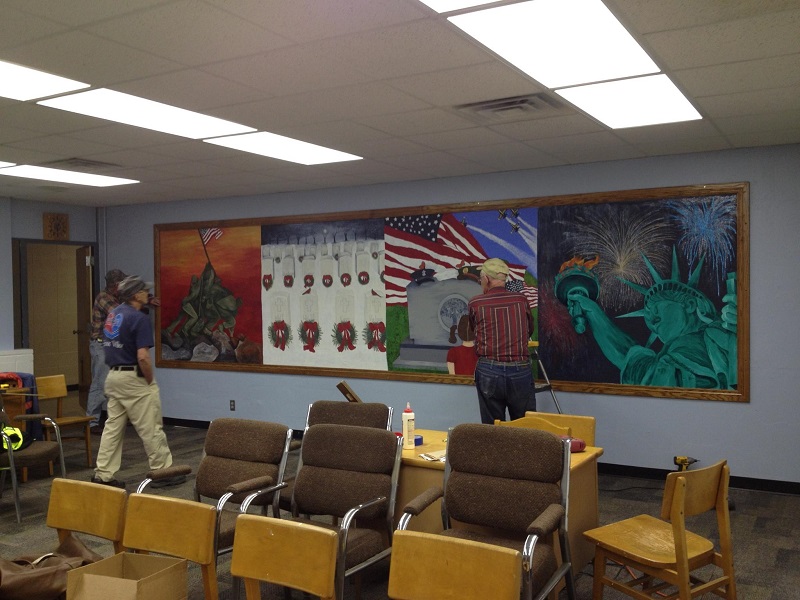 When high school classmates Rich Husman and Doug Prewitt asked retired art teacher Karol Holton to paint a mural for Post 125's meeting room in 2010, it was only six months after her husband Pat died from pancreatic cancer.

"That Merrill Legion group sent all of our sons to Boys State when they were juniors in high school," she said. They also sent one of her daughters to Girls State. She told them she would do it for free because they had done that for her kids.

"They got very involved with it," she said. Her daughter Kristine had even run for governor during her time at Girls State, she said. "It was remarkable experience for them. ... They were just fired up. And I think each one of the boys still has his T-shirt with all the signatures on it packed away."

Holton's father, Harry Brunkhorst, a World War II veteran, had been an active member of the post during his life, and had gotten Pat, who served in the Iowa Air National Guard, involved there as well.

"God gave me this ability to do this, so now I’m sharing that. I’m really grateful to our veterans. I think our country needs to wake up and keep that alive. I’ve seen the pride in these guy’s faces. ... They’re just tickled pink - for guys."

Aside from her family's involvement with The American Legion and the military, she said she was happy to create art for this purpose pro bono.

"You can’t put a price tag on a person that loses their life. You just can’t," she said.

The mural itself took some time. The longest period of waiting was for the right idea to strike. The Legion left it up to Holton to come up with the plan, asking only that she include a cemetery.

"You gotta be in the mood to do it or it doesn't happen," she said. Eventually, she landed on the theme of "Four Seasons of Patriotism."

Beginning the actual painting in January 2014, the Beach Boys and Roy Orbison provided the soundtrack as Holton would trek into the community center each day to paint.

"You get good music, you can go fast," she said.

"People would say, 'What’d you do today?' I said, 'Painted pine needles.'"

The process culminated in April with a 24-by-6-foot piece of art: A fall sunset behind the raising of the flag at Iwo Jima; snow-drift on the stones at Arlington Cemetery in winter; a little girl saluting the flag in front of a gravestone with a Legion marker in spring - parade season; and finally, the Statue of Liberty, fireworks bursting behind her face in summer.

The mural has been well-received by the Legionnaires, she said.

"One guy came in and said he loves the spring one because it’s really telling a story: it’s got the past, the present, and the future," she said.

The painting contains some personal stories as well. Cardinals perch on the World War II and Vietnam stones to commemorate her father's, friends' and husband's service. Butterflies in the spring scene also have special meaning for those who've experienced the loss of a loved one, Holton said. She said the day before Pat died, a large flock of monarch butterflies just bombarded her daughter.

"People that understand that will get it when they look at it," she said.