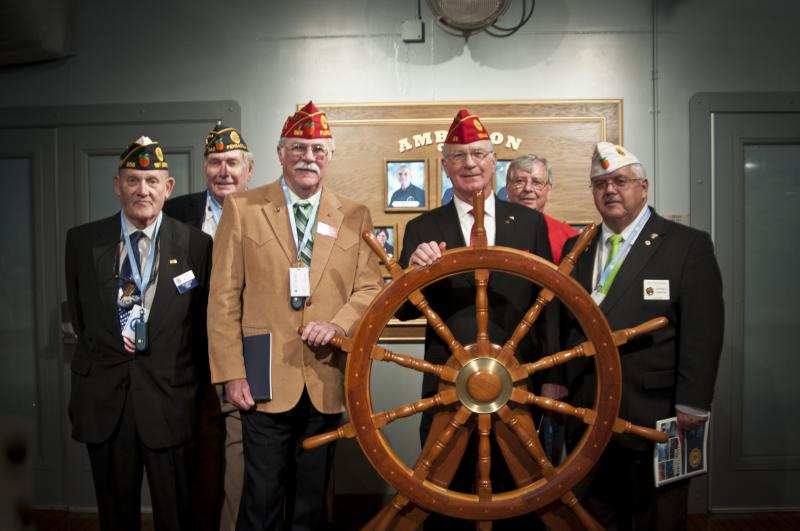 The museum showcases significantly historical aircraft such as the first aircraft commissioned for flight by the U.S. Navy, the A-1 Triad, the last combat F-14 Tomcat, record-setting aircraft like the NC-4 Flying Boat, the first plane to fly the Atlantic, and an SBD Dauntless that flew at the Battle of Midway.

Dillard and Schwabe also toured the National Flight Academy, located adjacent to the National Naval Aviation Museum. The National Flight Academy offers one of the most exciting and immersive learning experiences in the world – inspiring 7th-12th graders to take an interest in science, technology, engineering and mathematics (STEM) in an aviation-themed adventure aboard a massive virtual aircraft carrier named “AMBITION.”

Fully immersive, participants hear the rumble of the ship’s “engines” pushing it through the water to the sounds of flight ops on the “roof” to 1MC announcements calling the crew to action to the scenically treated bulkheads and simulation centers to the state-of-the-art flight simulation technology.
The missions are non-combat, consisting of search and rescue, disaster relief, air racing and firefighting.

Accredited teachers facilitate the program incorporating STEM principles along with 21st century skills including critical thinking, problem solving, communication and teamwork. Professional security and a medical nurse are also present when participants are aboard.

Participants live for six days in this 102,000-square-foot, state-of-the-art facility designed like a mock aircraft carrier. Young people eat on “mess decks” and sleep in six-bunk staterooms, rising at 0630 with Taps at 2200.

They plan missions with their squadrons and execute those missions with 30 networked flight simulators. During their week at the National Flight Academy, participants become immersed in the world of aviation. On a not-to-interfere basis, excursions to the Naval Air Station Pensacola control tower, rescue swimmer school, and when available watching the Blue Angels on the museum flight line, are also afforded the participants during their time aboard.

The National Flight Academy provides inspiration and motivation for middle and high school students to explore technical fields as a vocation, to take calculus and physics as they can now better see a real-world – and fun – application, and apply 21st century skills they have learned to their own lives.

To learn more about the National Flight Academy and scholarship opportunities, visit www.nationalflightacademy.com.