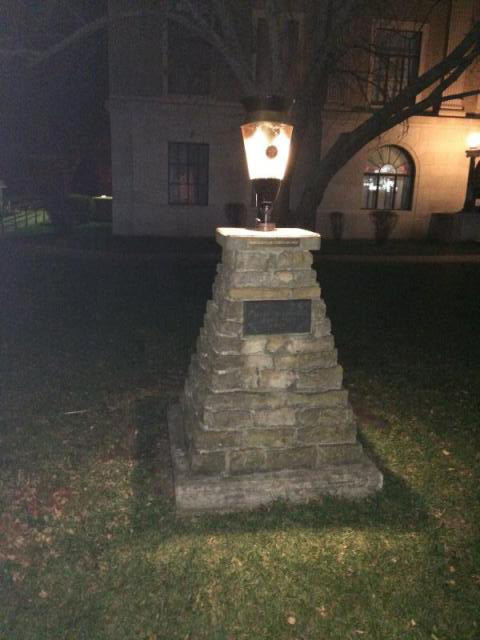 On Nov. 11, the vision of past Legionnaires was realized when an eternal flame -extinguished for nearly 40 years - was re-lit in Lyndon, Kansas.

Jayson Massey, commander at American Legion Post 125 in Lyndon, was relatively new to the community when he noticed an eternal flame for veterans near the Osage County Courthouse that wasn't burning.

"I said this is an eternal flame. Why isn't it lit?" Massey said.

As an Air Force veteran and Legionnaire, he decided he would find a way to "turn it on somehow."

He began to research the flame's history, mining what information longtime residents could offer. A local businessman, Greg Dalrymple, told him the Legion had erected the monument and lit it in 1969. The eternal flame monuments "were pretty popular back then," he said.

It only remained lit for about five years. It was tamped in the mid-1970s due to the gas crisis.

Massey got to work. Post 125 voted to take on the project in the spring, and they got to work, hunting for companies that could restore the monument to its glory days luster.

Joining forces with the Osage City post, they hired a sandblaster to do the job, and had electricity run to the monument. In total, Massey estimates the project cost $800, which covered labor, equipment, trenching and the new LED lights.

It took right up until the final hours before the Veterans Day dedication ceremony to finish. In fact, Massey said he realized he had put in a switch incorrectly, which meant paying for the fix out of his pocket and running an extension cord to the flame for several days.

"I was sweating pretty heavily on that one," he laughed.

At the ceremony, Massey read a speech and the flame was "re-ignited" 45 years to the date of its initial dedication, hopefully for good, Massey said.

"The only thing that The American Legion asks of you is that you never let this flame be extinguished again. ... Remembrance of our veterans will always exist as long as we keep this torch forever lit," Massey said at the ceremony.

He said it represents not just veterans, but the Legion's ongoing work for them in the community.

"An eternal flame should of course be eternal - not to mention that a lot of Legionnaires put time and money into the original project. Just to see it sit there and basically rot away I thought it was really important to at least try to do something to get it to where it was originally," Massey said. "Right now it actually looks better than it did originally, which is awesome."