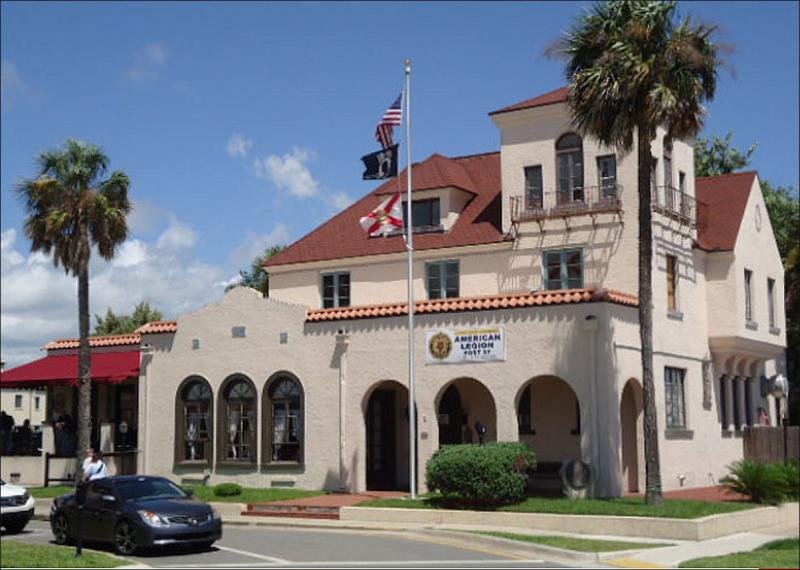 In more than 450 years of continuous occupation since its founding Sept. 8, 1565, St. Augustine represents four and a half centuries of continuing military history, and a primary reminder is Charles F. Hamblen American Legion Post 37, prominently sited on the city’s historic bayfront.
Suitably, the 129-year-old former estate and later Working Men’s Club is a focus in this 450th anniversary year of St. Augustine. A $2 million renovation of the historic post “will be both a boost to the community and part of the legacy of the 450th commemoration of St. Augustine’s founding,” volunteers with Forward March, Inc. say. “If we can put it in tiptop shape … it will be something all in the community can enjoy,” says Nancy Birchall, who with husband Ron, a retired Army lieutenant colonel, is helping spearhead a campaign to upgrade the historic bayfront structure.
Among changes will be moving the kitchen from front to back of the building, with patio and dining area in the front. The Legion is open to the public for dining, Birchall says. Also planned is a permanent salute for the St. Augustine military. In cooperation with the St. Augustine 450th Military Commemorative Committee, an installation of permanent museum-quality displays interpreting 450 years of St. Augustine’s military history will be included. That will add an educational experience to the post.
The elements have taken a toll on the structure, and renovations are challenging as the building comes under the city’s Historic Architecture guidelines. Undaunted, Forward March plans to have major work done in time for September 450th ceremonies. Among the fundraisers, an inaugural St. Augustine Military Ball, a Black Tie/Military Dress Uniform event.
Legion Post 37 is a short walk south of perhaps the most famous landmark to St. Augustine and its military history, the 302-year-old Castillo de San Marcos National Monument, sprawled across 20 acres along the city’s bayfront.
St. Augustine’s 450th anniversary is an ideal time to witness the city’s legions of history in the Historic Florida Militia, umbrella volunteer organization for Men of Menéndez – 16th Century Spanish, St. Augustine Garrison – 18th Century Spanish, 60th Regiment of Foote – 18th Century British, East Florida Rangers – 18th Century British, HOTAO – 16th Century Indian, St. Augustine Textile Guild – 18th Century Crafts, Searle’s Buccaneers – 17th Century British, Drake’s Men – 16th Century English, and First Florida Frontier – 16th Century Crafts.
Annual re-enactments of English corsair Francis Drake’s raid of 1586 and pirate Captain Robert Searle’s Sack of St. Augustine in 1668 are regular features along streets laid out by Spanish Ordinances for Town Plans of the Indies in 1573, still intact today within a living city of 14,000. From a small, remote garrison in the new world, strategically vital to protecting Spanish treasure fleets riding the Gulf Stream up Florida’s east coast, to today’s headquarters of the Florida Department of Military Affairs and Florida National Guard, St. Augustine’s history of military service is never out of mind – and rarely out of sight.
A renovated Charles F. Hamblen American Legion Post 37 with its museum-quality displays and artifacts will help keep that history alive.