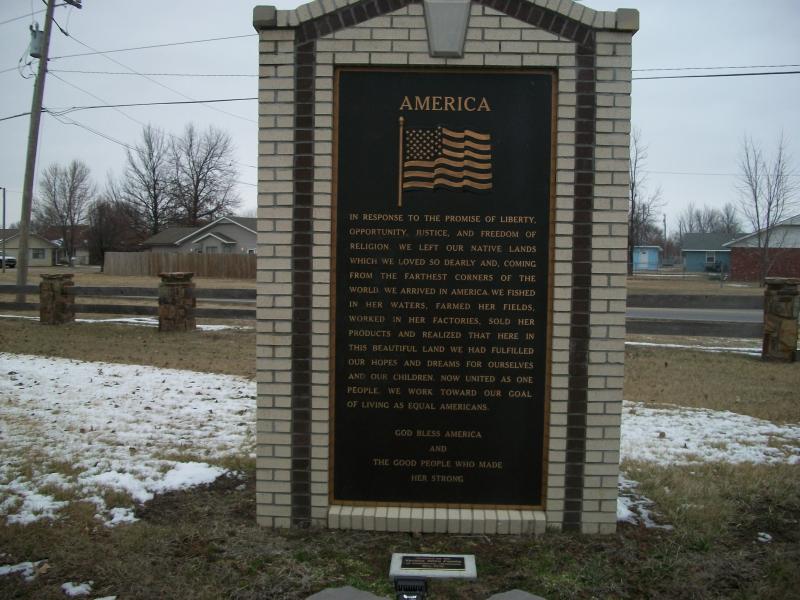 The bronze monument in front of Post 147 in Miami, Okla., bears words that denote patriotism, a call for brotherhood and a mystery.

After the Honor Guard performed the funeral services of a local veteran, Vernon Allen, the post received a call from his son. Legionnaire Roy Woods said while going through Allen's things, a giant bronze plaque was found, covered in trash, collecting dust in a garage. The son called the Legion post, offering to donate it instead of scrapping it.

But underneath "years and years of grime" lay text that moved the members of Post 147.

"You could take your hand across this and you could feel every single letter," Woods said.

"In response to the promise of liberty, justice and freedom of religion, we left our native lands which we loved so dearly and, coming from the farthest corners of the world, we arrived in America. We fished in her waters, farmed her fields, worked in her factories, sold her products and realized that here in this beautiful land we had fulfilled our hopes and dreams for ourselves and our children. Now united as one people, we work toward our goal of living as equal Americans.

"God bless America and the good people who made her strong."

"The words are touching. It's meaningful," Woods said.

Yet any history of the plaque, with its unusual language, is unknown. Authored anonymously, there isn't even a foundry mark.

"Where did Mr. Allen get the plaque that was stored in his garage? Nobody knows. I guess he took that information to the grave with him," Woods said. "To me this is a relic that was completely lost, and I wish I knew more about it but I don't."

Originally, the Legionnaires planned to hang the plaque, but, upon finding it - all 850 pounds of it, they decided to build a special monument instead. The brick masonry was donated, and because of the weight of the plaque, two steel beams were dug a yard down, set in concrete and affixed to the monument.

Post 147 member and then-Oklahoma Rep. Larry Glenn encouraged the post to have a dedication ceremony and paid to cater it in 2014. Woods said over 200 people attended.

"Once people know about it, they pull in there with the intention of not getting out of the car. Then after they read it, you'll normally see the husband get out with his camera: He has to get a picture," Woods said. "It's very well received."

The post hopes it proves a small tourist attraction, as it is located only three miles off historic Route 66. In this vein, the post also plans to open a free museum with artifacts from World War I through the present. World War II veteran and Post 147 member Glenn Pitts pushed for a museum.

"Our goal is that people come down look at the plaque, then come inside and take a walk through the military museum," Woods said.

Woods said he anticipates the museum will open by Memorial Day 2015.