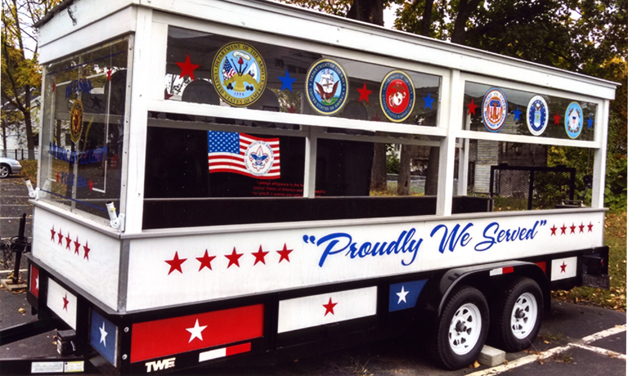 At Post 184 in Hudson, N.Y., the parades were thinning out. Only two or three American Legion members were walking in the celebrations. Many veterans who wanted to show their patriotism and participate on Memorial Day, Flag Day and Veterans Day couldn't because of age or disability. Henry "Hank" Crouteau, Jr. was struck by an idea: a parade float with seating.

It was important to the post that its "classic" veterans, World War II, Korea and Vietnam vets, be able to participate in the city's patriotic affairs.

"They have no other means of being able to enjoy the occasion," Crouteau said. "They can't get out, so there’s no other way for them to enjoy something like this - just the camaraderie of other veterans, and receiving the accolades riding down the street. It’s just unbelievable."

Interested vets make reservations with the "wagon master," show up at the post the day of the parade and everything else is taken care of, Crouteau said.

Now in its fourth year, Crouteau said the float has revitalized the parades. They encourage those who would otherwise stay at home to come out and join them. The float comfortably holds about 22 passengers and it's usually packed, Crouteau said.