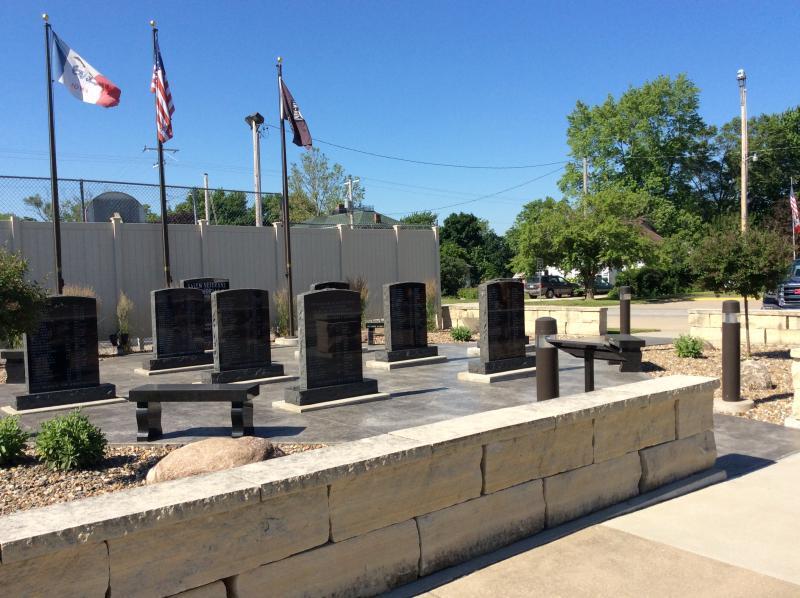 Gene Stewart and Jim Dean, another committee member, presented the council with a schematic drawing of the memorial, which will be located across the street from the community center. A comment was made that names of 217 veterans interred in the Salem cemeteries will be on the monument and applications of 41 other veterans have been approved.

Jeff Murphy of Murphy Funeral Home and Monument Sales of Mt. Pleasant will provide the initial stones for the names of the veterans at cost and also will pay for the engraving of the 217 names of deceased veterans in the town's cemeteries. To be eligible for placement on the memorial, the veteran must have ties to the City of Salem, i.e., born in Salem, buried in Salem, went to school in Salem, lived in Salem at one time or another, married someone from Salem, etc. Give Gene a call to see if you are eligible: 319-385-3050.

Cost of engraving of the name is $150; we have decided that $150 will cover the engraving of the new names and help some on paying for the new stone. Cutoff to have your name and payment in will be April 1 of the said year. If we need more money for the project in the future, we will have fundraisers. The memorial was completed for a grand opening and dedication date set for July 22, 2017. We celebrate with nine stone markers, four stone benches and an American flag, Iowa flag and POW/MIA flag. Special thanks to Mike Barton, Barton Construction, for doing a wonderful job from start to finish and for donating a large amount back to the memorial