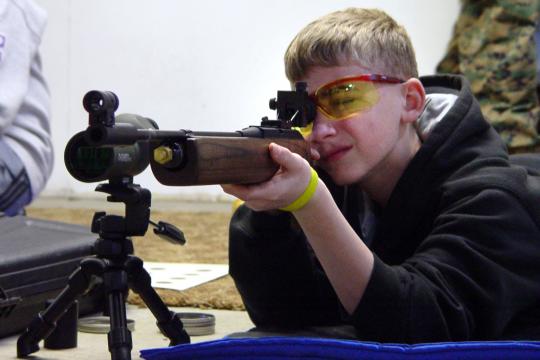 UTICA -- Junior ROTC programs were able to hold their first sanctioned shooting competition at Utica Post 229 on Saturday, Feb. 6, now that the post has an expanded junior shooting range.

Proctor High School Navy JROTC, which hosted the air rifle shooting invitational, spearheaded the expansion of the range with the cooperation and support of the post, reported Chris Urban, the post's 2nd vice commander.

The shooting competition was held in conjunction with a drill compeitition at Proctor involving seven upstate New York schools:

Four of the schools took part in the shooting competition: CBA, Amsterdam, RFA and Proctor.

"Now we hope to conduct them on a regular basis,” noted Rob Piper, CDR, USN (retired), senior naval science instructor at Proctor. “We certainly want to thank Post 229 for allowing us to expand the range and their outstanding support and assistance in getting it completed. Your ‘yes’ is going to allow Central N.Y. youth in the JROTC programs to have a place to go and compete for air rifle.”

Added Post Commander Anthony Palladino, "This range right now is the pride of the area."

The range was expanded from nine to 10 lanes so it could host official competitions. Located in the post’s basement, the air rifle range already sees a lot of activity, with the post’s junior shooting program, plus both Notre Dame and Proctor Navy Jr. ROTC teams practicing there.