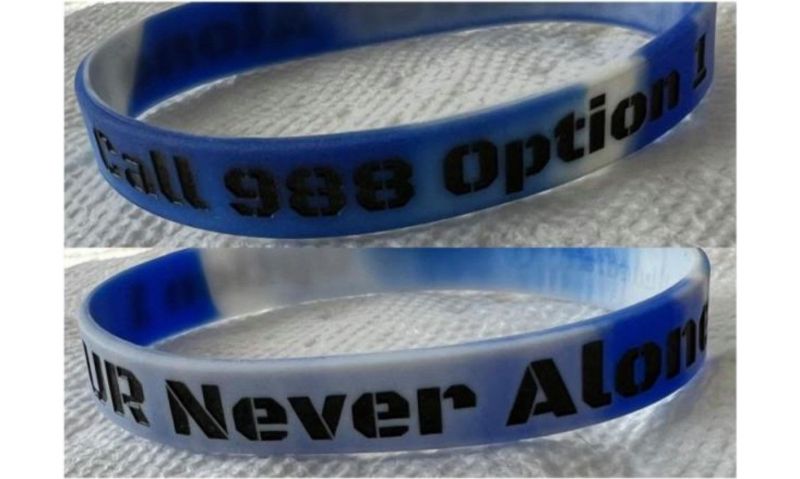 Haitz, an American Legion Rider of Chapter 241 in Le Mars, Iowa, created a bracelet to help people who encounter a veteran in crisis quickly remember the suicide prevention hotline number so veterans know they are not alone.

“All this together made me decide to try to do something, anything, to address the horrendous number of veteran suicides in my Legion district and beyond,” Haitz said. “The hope is that the 988 press 1 message would ‘click’ with the wearer if they encountered a vet who was depressed for whatever reason. Every opportunity I get, I hand them out.”

Haitz ordered 1,000 wristbands to hand out for free. When he shared what he was doing with fellow Post 241 members and Riders, “the support was overwhelming,” he said. “The wristbands are a big success and have gone out not only to this area but well beyond.”

And with a grant from Northwest Iowa American Legion Riders and donations from other Legion Family members, Haitz purchased key fobs and lanyards with the same message to hand out. The merchandise is from a Legion Rider-owned company called Wicked Graphix.

The bracelet, lanyard and key chain with the suicide prevention hotline is how Haitz is saving the live of veterans. It’s his way to Be the One.

The American Legion’s Be the One initiative aims to eliminate the stigma associated with mental health wellness and, in turn, reduce the rate of veteran suicide. Learn more at betheone.org.

“Five years ago, when we started talking about 22 a day (veteran suicide numbers), that’s all talk. If somebody doesn’t pick it up and do something, it’s only going to get worse. That’s what Be the One is to me – it’s I have to do something. I feel the need to Be the One to do something so this is what I’m doing.

“I hope this resonates with other people, and they start doing something so they can Be the One. If we all do something, anything, it’s going to help. If we save one life, it’s all worth it.”