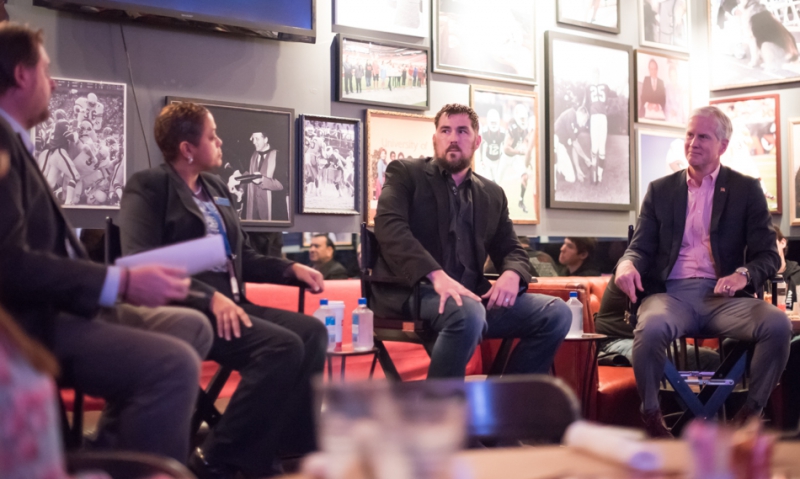 The Legion's Verna Jones (second from left) participates in a panel discussion with Marcus Luttrell and retired Maj. Gen James "Spider" Marks at the University of Phoenix Apollo House. (Photo by Lucas Carter)

If anyone has a right to demand a thank-you for his military service, Marcus Luttrell might fall into that category. The author of “Lone Survivor,” Luttrell was gravely wounded during a firefight in Afghanistan in 2003 that took the lives of three of his fellow SEALS and led to the deaths of eight 160th Army Special Operations Aviators and eight Navy SEALs during an attempt rescue.

But during an American Legion-moderated panel discussion in Phoenix during Super Bowl weekend, Luttrell said he doesn’t want any thanks.

“We do the things that we do so that (civilians) don’t have to worry about anything,” Luttrell said. “Live your life. Love your kids. Go to work and enjoy that day. If you feel you want to do something, there are positive organizations that you can obviously affiliate yourself with to help out in that way.

Luttrell was one of three panelists, joining American Legion Executive Director Verna Jones and retired Maj. Gen. Major General Spider Marks, the former commanding general of the U.S. Army Intelligence Center and the the senior intelligence officer for the 2003 liberation of Iraq. The discussion took place in front of an audience comprised mainly of college student veterans at the University of Phoenix’s Apollo House in downtown Phoenix.

The panel focused primarily on the transition from the military to the civilian world and the obstacles that sometimes hinder that transition. Department of Veterans Affairs health care, getting or furthering an education and navigating the job market were among the topics discussed.

“It was very valuable,” Jones said of the panel. “The caliber of people who were (on the panel): (Marks) spent his life in the military, and Marcus … just the incredible things he had to go through to survive … that’s exactly who we advocate for. Those are the people that we get up and go out and create resources for. Those are the people we’re on (Capitol Hill) for – those veterans who have given so much to this country. And to raise the level of awareness of what veterans need ... and how veterans feel was very important.”

Jones gave an overview of the Legion’s many programs that aid in the transition process, including participation in military and veteran career fairs, aiding veterans in getting their VA compensation and continuing to advocate for better education benefits.

“We can never do enough for veterans,” Jones said. “That’s why The American Legion continues to create programs. Somebody from The American Legion’s D.C. office is on (Capitol Hill) every day. We’re working with congressional liaisons to make sure that we can help with the right language for the right bills to help veterans – not just language, but what does it actually do for the everyday veteran when it’s put out there.”

Helping veterans further their education and find a successful career also are Legion priorities, Jones explained. “When you come out of the military you’re a well-oiled machine,” she said. “Veterans come in already ready.

“The American Legion believes that we need to continue to have those resources for veterans … for people who want to go back to school and build a better quality of life for yourselves and your families, and then pay that forward.”

Luttrell admitted leaving the military wasn’t easy. “It’s tough for everybody,” he said. “My brother’s dealing with it right now. You’re used to doing something your entire life … having that routine every day. I missed it, to tell you the truth. My brother was still in, and I missed all my buddies. That was the biggest thing: missing my friends and my teammates. It took me awhile to rotate out of that transition. It is an adjustment.”

Marks, a regular contributor on CNN who now serves as executive dean of the University of Phoenix’s College of Criminal Justice and Security, spent 34 years in the Army – developing strong relationships along the way.

“That’s the thing that’s most difficult to give up: the sense of purpose,” he said. “It’s really the sense of camaraderie. And it’s the focus you have and the shared sense of what it is you’re trying to accomplish with your brothers and sisters. It’s very difficult to make that transition. How do you redefine yourself without routinely looking in the rearview mirror and trying to be what you were once? You’ve got to take what you were once and move forward.”

A West Point graduate, Marks said it’s important to ask how education is relevant and accessible, as well as where a veteran is in his or her life and how an education relates to that. “Have an objective,” he said. “Have a mission which has to do with a vocation. (You) want to have an education that’s relevant, that (you) can touch and feel and understand that it’s going to lead to a conclusion.”

Luttrell, who uses VA health care, said quality care is important – as is seeking out that care. “The worst thing you can do is go home and not (seek care),” he said. “Most of us … don’t want to go in the hospital. I’d walk outside the door forever before I’d finally walk in there.

“A lot of times I didn’t want to accept the fact that I was that, that I was slowing down. That’s a hard pill to swallow for a lot of us.”

Luttrell said it’s also therapeutic to meet up with other veterans getting VA care. “You think to yourself, ‘This guy’s not thinking about this,’ and then he starts talking about it,” he said. “(You think) I was just going through that. It’s important.”

When it comes to looking for a job, Luttrell said veterans don’t want handouts or special treatment. “You give me a chance, that’s all I need,” he said. “All I’ve got to do is put my foot in the door. I’ll take it from (there). That’s how we all think.”

During the course of the weekend, Jones also was able to briefly meet one on one with various celebrities, members of Congress and industry leaders. She spoke with former National Football League greats Eric Dickerson and Richard Dent about traumatic brain injuries, and was able to talk veteran issues with U.S. Reps. Jeff Denham, Gregory Meeks, Kevin McCarthy and Kyrsten Sinema.

“We have to be out to tell our story so people understand who the Legion is and for us to understand who everyone else is, so we can find a way to take all the information that we get from different perspectives and bring it back and create those resources and those programs that are going to be veteran-centric,” Jones said. “For The American Legion to come out and network with so many people and get so many perspectives … gives us a lot of very good information.”