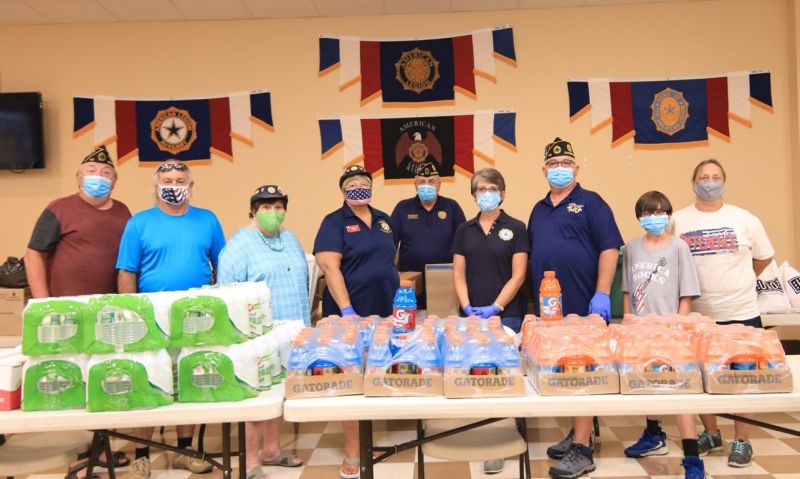 For the American Legion Family at Hardin Post 113 in Elizabethtown, Ky., ensuring that soldiers either departing to or returning from overseas deployments out of Fort Knox feel supported has become a source of pride.

The largest post in the state, with a membership of almost 1,300 Legionnaires and around 1,700 total Legion Family members, regularly set up flags and a display at Sadowski Fieldhouse, and distribute snacks and drinks to Fort Knox units when they leave for or return from a deployment, personally greeting each soldier. There have been times when the Legion Family members have been forced to wait because of delays in troop movements, once as long as two and a half days, but that hasn’t hindered their efforts.

The post also has hosted cookouts for soldiers stationed at the base and has created a special American Legion coin to pass out to those returning from a deployment.

“It’s easy to do. We’re about 12 miles from Fort Knox,” Post 113 Commander Joe Garrett said. “We have a great reputation on Fort Knox. We also have a lot of insight into Fort Knox. Most of our folks here retired out of Fort Knox, so we know what goes on there.

“We’ve got ourselves inserted into Fort Knox. We’re invited to their meetings. We know what’s going on. They send emails all the time. And we’ve made sure if they’ve got a unit leaving or coming, let us know. And we’re always there.”

But like throughout the rest of the nation, the coronavirus put large group gatherings on hold – including mass departures and return of Fort Knox soldiers. That included a deployment of 800 soldiers in July, at which time Post 113 American Legion Family members weren’t allowed to set up their display on base.

But that wasn’t going to stop the post’s Legion Family troop support efforts – nor was the fact that the size of the deployment was around 300 soldiers bigger than any previous Post 113 effort. “We didn’t take a break because those soldiers don’t get to break,” Garrett said.

Post 113 put out the call to its sponsors to assist with its support efforts, the Louisville USO and Houchens Industries. Hygiene items, snacks and drinks were collected and then taken by Post 113 volunteers to a location on Fort Knox where they were distributed by base staff to the deployment units while they were in pre-deployment quarantine.

Garrett said the battalion commander and his sergeant major came to Post 113 for a private ceremony to present Garrett on behalf of his fellow Legion Family members with a plaque of appreciation for the effort.

Prior to the most recent effort, when the American Legion Family members have been able to personally meet with the servicemembers, Garrett said the soldiers’ “are very grateful. And I don’t think it’s something (they) expected. It was a delight for them.

A wrap-up of other American Legion Family efforts happening recently during the pandemic.

American Legion Riders and other American Legion Family members from all over the state came together to honor former Army Sgt. Justin Hicks, who served three overseas deployments but suffered a traumatic brain injury and post-traumatic stress disorder from an IED blast and eventually took his own life.

More than 90 motorcycles manned 100 flags along the route as they escorted Hicks’ body from Abilene to Golden Belt Memorial Park in Great Bend. The Riders also provided a flag line at the cemetery, while the Department of Kansas’ Eighth District Honor Guard provided burial honors.

Watch video of the parade here.

For the fifth time during the coronavirus pandemic, the American Legion Department of Michigan is teaming up with Gleaners for a food-distribution effort for veterans, seniors or families in need.

American Legion Post 200 in Taylor will host the most recent effort, which will take place from 1-3 p.m. Aug. 14. Via contactless distribution, 500 40-pound food boxes will be distributed. Drivers stay in their vehicles while volunteers load a 40-pound food box into the trunk or rear of the car.

Buffalo American Legion Post 270 has managed to help bring its community together despite the pandemic. The post has been using its large parking lot to host monthly car shows.

"The big annual car shows that are normally scheduled throughout the summer in Minnesota were mostly canceled. We decided to get the word out through social media, word of mouth and newspaper ads that we'd step up to the plate and host car shows for these dedicated classic car owners,” Post 270 Adjutant Connie Herzog said via Legiontown. “The parking lot is large enough for social distancing, which draws the crowd. It really feels great to be able to provide this space for so many car owners. Everyone has a great time.”

In Brewster, American Legion Argonne Post 71 sponsored a drive-by parade to honor Army veteran Nicholas DeVito, who was celebrating his 84th birthday. Included in the parade were members of the American Legion Post 71, the Brewster Fire Department, other veterans service organizations and fraternal organizations, and family.

DeVito was presented with a certificate of recognition on behalf of American Legion National Commander James Oxford.