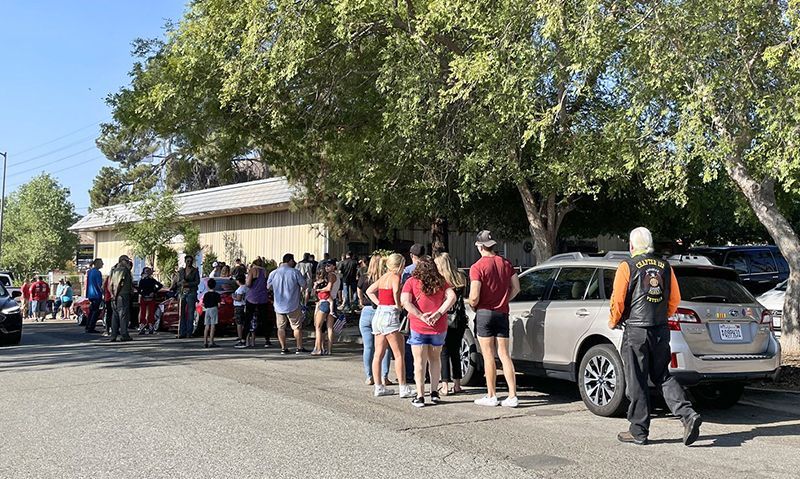 U.S. Marine Corps Lance Cpl. Kareem Mae’Lee Grant Nikoui was just 20 years old when he and 12 other U.S. servicemembers were killed during an Aug. 26 suicide bomber attack at the Hamid Karzai International Airport in Kabul, Afghanistan.

A 2019 graduate from Norco High School in Riverside County, Calif., Nikoui has been honored via parades, tributes and ceremonies in his hometown since his death.

And now, thanks to an effort led by American Legion Post 328 in Norco, Nikoui’s family not only knows that his sacrifice is appreciated, but that someone is looking out for them.

A fundraising effort that included serving almost 600 pancake breakfasts has resulted in around $33,000 raised for Nikoui’s family. Post 328 Commander Jen Turpin estimates that number will grow by a few thousand dollars by the time it is turned over to the family.

“We support veterans. That’s our duty: veterans supporting veterans,” Turpin said. “And that’s what Kareem would want: us to be there for his family. He’s a veteran. He served. He fell. Here we are to do whatever we can, and it’s monetary. But maybe it’s not just monetary. Maybe now they know we’re here to support them no matter what they need.”

Turpin said a member of the post and neighbor to Nikoui, Eric Miller, came into the post the morning of Aug. 28 with the idea of the post putting on a pancake breakfast. He shared the idea with a post employee, who then reached out to Turpin.

The next day volunteer’s from Post 328’s American Legion Family were on site before 5 a.m. to begin prep work and cooking for a crowd that Turpin estimated would be 200 to 300 people.

The estimate was a bit off. “Over a thousand people came to our building,” Turpin said. “We went to the store four to five times (for supplies). We had four griddles going, and we had people bringing their griddles from home.”

Turpin said the post’s 2019-2020 Legionnaire of the Year, Dave Waldron, helped lead the efforts. “I have the most amazing volunteers anyway. Anytime I ask for anything, they stand up and say ‘I’m here’,” Turpin said. “And it wasn’t just my regular volunteers that helped out. They were taking shifts … and then another group would come out. And there were some that just worked six hours straight. I was so very proud of those guys.”

Over the course of four hours the post served 572 breakfasts. Many of those who came by the post and didn’t eat still left a donation as the post passed around a donation bucket.

The breakfast itself raised $2,900, but the post had started soliciting donations the previous day and had collected $27,000. More money has come in since, and the post will continue to collect funds until Nikoui’s funeral on Sept. 18.

“Every cent that we made is going to the family,” Turpin said, noting she wasn’t surprised by the outpouring of support for Nikoui’s family. “Norco is all heart. We have our little military base ((Naval Weapons Station Seal Beach Detachment Norco), but I feel like we’re like a military town where we wear our heart on our sleeve. We are Norco strong. If (Nikoui’s family) comes to us in a year and say ‘we need this,’ we’ll be there.”