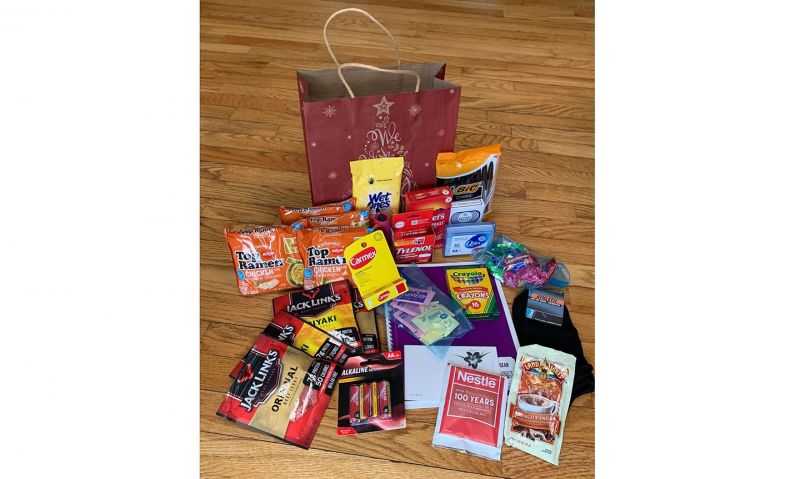 Post 1111’s members are in the final stretch of a lofty goal: providing 1,111 care packages for U.S. troops stationed in Japan. Each month since January, the post has been soliciting donated items for the gift bags, ranging from ramen noodles and other non-perishable food items, to personal hygiene products, pens, paper and playing cards.

Post 1111 Commander Jena Wilmers said the idea for Gifts Bags for Troops actually started in late 2020 with a conversation with a gentleman whose son was stationed in Okinawa, Japan.

“He was like, ‘Everybody sends gifts to Iraq and Afghanistan, but a lot of people forget about the other bases,’” Wilmers said. “So we were ‘ok, we’ll send our gift bags to Japan.’ We mobilized as much as we could, and we were able to send 50 gift bags to them last year. And they were so excited when they got them.”

But the receipt of the gift bags also came with a challenge from the gentleman’s son: send 1,111 next year to the base of 3,000 servicemembers.

Wilmers said the initial gift bag effort was pulled off by her and another Legionnaire. But after the challenge “I told my cohort ‘if we’re going to do this, it’s going to be a year-long project, and we’re going to need to get a bunch of people to help us,’” she said. “One of our members is the commander at (VFW Post 702 in Wyoming, Mich.), and we talked to him and say ‘hey, do you want to do this together?’ And they immediately said yes.”

Starting in January, the effort has featured specific items each month it was soliciting, starting with ramen noodles. There are multiple area drop-off locations for the items; the effort also is accepting financial donations to purchase items. And the post has set up a wish list on Amazon.com to solicit donations of the items it still needs.

Wilmers said later this month Posts 1111 and 702 will determine what items they still need and let the public know what they can donate to assist the effort in the closing stretch. A “Big Give” drive-through event is scheduled for Nov. 9 to collect the final donations.

Once all the items are collected, they will be packed up by members of both posts, as well as Walker Mayor Gary Carey, other local politicians and eight area Meijer managers. Wilmers said Meijer provided the effort with $1,700 to purchase gift bag items in its stores. A company has committed $1,000 to assist with shipping charges.

“And other entities within our community have jumped on board in this opportunity, and here we are,” she said. “It’s been really cool.”

Wilmers served in the Michigan Army National Guard from 2006 to 2014; all of her deployments were stateside, such as Pentagon and border security. “But I do know people who did (serve overseas and received care packages), like my brothers,” she said. “They both just really appreciated the sense of normalcy from seeing those items from home and knowing that somebody cared. They really appreciated that at the time they came, especially when they couldn’t be home around the holidays.”