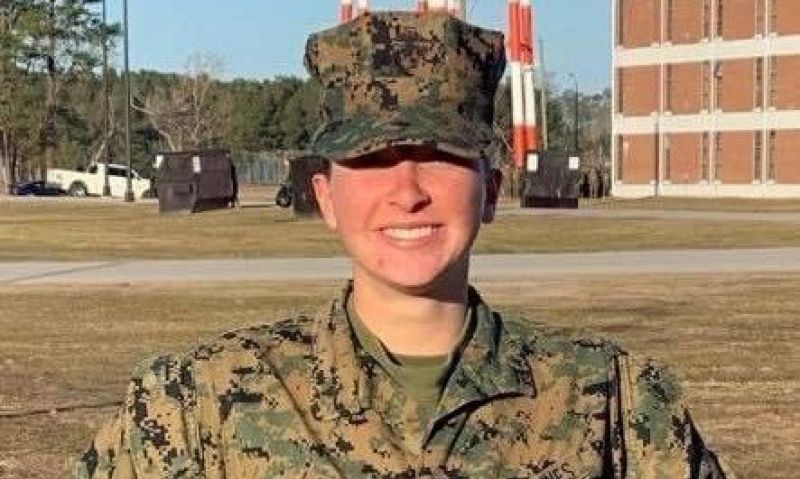 Last August, as U.S. military forces were in the final days of withdrawing from Afghanistan, a suicide bomber detonated an explosive device at Kabul Internation Airport that killed 13 U.S. servicemembers and 170 Afghan civilians.

Among the 18 U.S. military personnel injured during the attack was 20-year-old Marine Cpl. Kelsee Lainhart, whose family lives in Dearborn County, Ind. The attack left Lainhart paralyzed from the chest down; she spent time at Walter Reed National Military Medical Center before being transferred to the Shirley Ryan AbilityLab, where she continues her therapy.

When members of American Legion Post 235 in Milan – located less than 20 miles from where Lainhart graduated from high school – learned recently that her family was struggling to navigate the assistance process, it wanted to help.

And it did, to the tune of a $50,000 donation made to Lainhart’s mother, Stacey Lainhart, following a post meeting on July 14. Post 235 Commander Walt Ruggles gave Stacey the news after she’d addressed the post membership about her family’s struggles with knowing where to look for assistance.

“When I told her, I thought she was going to faint,” Ruggles said. “Her jaw dropped. She said, ‘I’m not a hugging person, but I need to give you a hug.’ It was really neat.”

Post 235 was able to make the donation because of its big fundraiser for the year, a progressive add-on jackpot game it calls the Treasure Hunt. For 51 weeks, participants bought tickets for a chance at winning. Because the drawing went on for so long without a winner the final prize was more than $1 million and was drawn earlier this summer.

The post gets a percentage of the ticket sales, which it uses to fund scholarships for local students, support youth sports programs and assist area individuals and families in need.

Located so close to where Kelsee grew up, Ruggles said the post looked at her as “a local girl. Right after she got hurt there was a big bike ride to benefit her, and we were one of the stops on that. What happened to her was something that really struck us. We knew we needed to help.”

Kelsee’s best friend’s parents became regulars at Post 235 during the Treasure Hunt, and members of the post got to know them. Ruggles said the post asked that they pass on to the Lainharts that they’d like to help them if possible.

Stacey was invited to the post’s regular meeting, where she shared her family’s frustrations and said that any assistance the post could provide would be appreciated.

“As I sat there and listened to her … I could see our vets were upset that they were having this much trouble navigating the system,” Ruggles said. “After she spoke, we asked her to step out so we could conduct our meeting. One of our members then made a motion to donate a certain amount of money. One of our other members said, ‘no, that’s not enough.’ That’s when the motion came to donate $50,000. And our Sons (of The American Legion) squadron also has made a donation to the family, and our Auxiliary unit is also going to donate.”

After receiving the donation, Stacey Lainhart wrote on Post 235’s Facebook page that “we cannot thank you enough for your generous gift to Kelsee. We are forever thankful and I’m still just blown away. The generosity and kindness I saw and felt that night was something I’ll never forget. I don’t even have enough words in my heart to tell you how welcoming and caring everyone was. It truly is organization(s) such as yours that help our veterans navigate through life when things seem to be hopeless. THANK YOU!!!”

Ruggles said being able to assist the Lainharts during a very difficult time “feels very good to me as an individual and as part of our Legion (Family) and its work. We all band together to do what we do. We’re here to support veterans in our community and our community itself.”