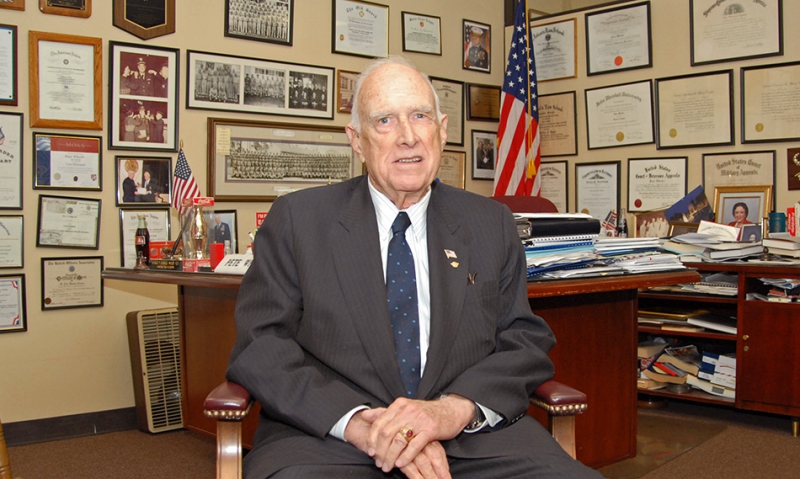 Among advocates for veterans, Pete Wheeler of Georgia was a legend at every level. He passed away April 21.

Pete Wheeler, who served as commissioner of the Georgia Department of Veterans Service continuously since 1954, passed away April 21. The World War II Army veteran was a nationally revered expert on veterans benefits and a 59-year member and leader in The American Legion.

“Pete Wheeler is one of our champions … we don’t have anybody else like him,” said Randy Goodman, commander of the Legion’s Department of Georgia. “He has served this state for over 60 years and has created an atmosphere where veterans feel welcome to walk into an office to get a claim done. He was the point man for all areas that affect veterans in the state of Georgia, and advised the governor and carried out all the programs.”

Goodman said that Wheeler “started something that has been very helpful to Georgia’s 780,000 veterans. Each year, he holds a veterans ‘supermarket of benefits’ around the state, to inform veterans of their benefits.” One such event drew more than 1,000 veterans. “He has done tremendous work for the veterans of Georgia.”

Thanks to Wheeler’s efforts, Georgia operates two state-supported nursing homes for veterans, one in Augusta and the other in Milledgeville. Each home has the capacity for about 230 residents and Goodman said the cost can essentially be covered by VA aid and attendance benefits. “So the nursing homes that he created, that serve our elderly veterans, that was his own compassion that he gave back to those veterans as they entered their final days. That was one of his greatest accomplishments for Georgia.”

A member of James T. Rayle Post 123 in Lexington, Ga., Wheeler was a recipient of The American Legion Gold Honor Medal. After serving four years in the Army, he joined the Georgia Army National Guard, retiring in 1978 at the rank of brigadier general.

Wheeler was appointed chairman of the National World War II Memorial Advisory Board and served in that capacity until the memorial’s dedication in May 2004. He was inducted into the inaugural class of the Georgia Military Veterans Hall of Fame in 2013. He was a past president of the National Association of the State Directors of Veterans Affairs and also served on the U.S. Veterans Advisory Commission.

American Legion National Commander Michael D. Helm said that Wheeler was known throughout the organization as a tireless veterans advocate, “serving Georgia veterans, assuring care and assistance to all. He will be greatly missed, but his legacy will ensure the continued care of all veterans in need.”

“He was a champion for every issue that we had for helping veterans,” said Dale Barnett of Georgia, the national commander’s representative on the Legion’s Legislative Commission. “He always said, ‘What’s good for veterans, I’m all for.’ He lived to work for the veteran -- Pete was still serving to his last breath.”

Wheeler was famous for the top-notch department service officers school he ran in Georgia. “That was always a very well-attended event,” Barnett said. The school featured expert speakers and programs on the most timely issues and changes in benefits. “Pete was always on the cutting edge of what was going on with veterans and how to help veterans.”

Barnett characterized Wheeler as “the epitome of a gentleman, a dedicated leader” who never missed a day of work if he could avoid it. “Pete always impressed you with his dedication not only to The American Legion, but to veterans throughout the state of Georgia. Pete was always the guy that brought everybody together.”

Graduating with a law degree from the University of Georgia, Wheeler became an attorney and was honored by the State Bar of Georgia with a certificate of accomplishment that recognized more than 50 years of service. He also received the National Association of State Directors of Veterans Affairs Lifetime Achievement Award.

Past National Commander Jake Comer said “it will take a while before we get another Pete Wheeler, to do the things that he has done for the veterans of Georgia and this nation. He spent many, many years as the commissioner there and he was very well loved by the Legionnaires of Georgia.”

Comer said, “It’s the Pete Wheelers and the history that he had with the VA that you depend on to make the right telephone calls to the right people. It’s going to take a long time to replace his expertise. I was very inspired by the man. I was in awe of him and I respected him very deeply.”

Among his many accolades, Wheeler was honored by the Atlanta USO with its Patriot of the Year Award, with the Freedoms Foundation at Valley Forge’s George Washington Honor Medal, and the Patrick Henry Award from the National Guard Association of the United States.

Past National Commander Daniel Ludwig said Wheeler’s passing was “a great loss. He’s certainly legendary in the world of veterans affairs and he’ll be missed by everyone – particularly by the people in the state of Georgia.”

Ludwig said Wheeler was “always enthusiastic and always knew what he needed to do – and he wasn’t satisfied until it was done. Pete was a great champion for veterans and their needs, so he will be deeply missed.”

A unique honor bestowed on Wheeler was the naming of an annual golf tournament, “Play It Again, Pete.” The event raises money for the Atlanta VA Medical Center’s homeless veterans program; it is sponsored by the Military Order of the Purple Heart National Service Foundation.

Goodman said one of the things Wheeler helped to do was to create an environment where veterans find Georgia an attractive place to live. He said Georgia currently has one of the fastest-growing veterans populations among all the states. “Pete Wheeler earned the respect of all the veterans of Georgia. We love him.”

Wheeler was born on Oct. 19, 1922, in Albany, Dorothy County, Ga., and grew up in Crawford. In 2006, Wheeler was interviewed by the University of Georgia Libraries for its Oral History Documentary Series.

This is an excerpt from that interview: