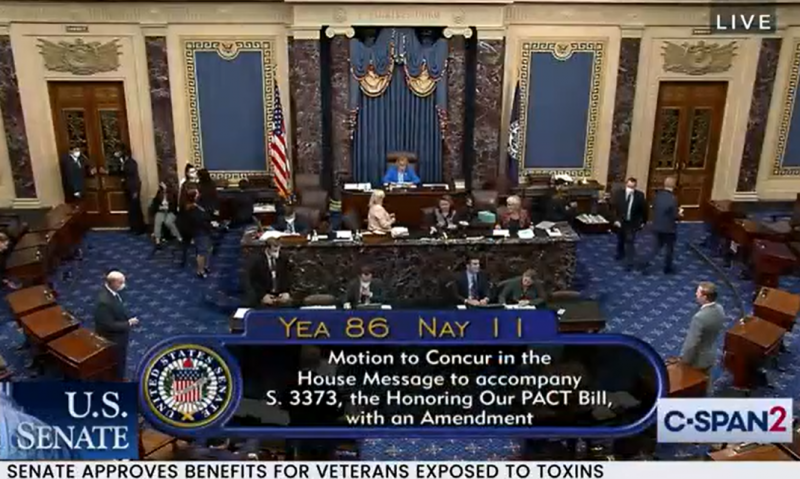 As the Sergeant First Class Heath Robinson Honoring Our PACT Act becomes law millions of veterans suffering from illnesses caused by toxic exposures will be eligible for benefits.

The PACT Act, which covers veterans from Vietnam through Iraq and Afghanistan, is the most significant expansion of benefits and services for toxic-exposed veterans in more than 30 years and addresses a broad spectrum of toxic exposures.

Veterans will now see additional benefits for exposures to burn pits in Iraq and Afghanistan, additional presumptive conditions for Agent Orange exposure and provisions for victims of water contamination at Camp Lejeune.

There are many pending questions about the new law and what it means. Here are some common questions and answers:

Question:
What changes will the PACT Act bring?

Answer: While some ailments caused by toxic exposure can present quickly, other illnesses can take years to manifest. This left many veterans outside their eligibility window to enroll in Department of Veterans Affairs (VA) health care and others struggling to prove a service connection because of the time that had lapsed. To address this, the PACT Act makes significant changes to the timeline veterans have to enroll in VA health care. The PACT Act:

·     Increases the period of time veterans have to enroll in VA health care from five to 10 years following discharge for post-9/11 combat veterans.

Additionally, the legislation codifies VA’s new process for evaluating and determining presumption of exposure and service connection — removing the burden of proof from the veteran.

Question: How do I know if I’ve been exposed to burn pits?

Answer: If you served in any of these locations and time periods, VA has determined you
have a presumption of exposure to burn pits or other toxins.

·       The airspace above any of
these locations

·      The airspace above any of these locations

Answer: The PACT Act added more than 20 new condition, including a dozen cancers, which are now presumed to be caused by exposure to burn pits and other toxins. This change impacts Gulf War era and post-9/11 veterans.

These cancers were added to the presumptive conditions list:

·       Gastrointestinal cancer of any type

·       Respiratory (breathing-related) cancer of any type

·       Asthma that was diagnosed after service

Question: What changes were made for Vietnam-era veterans?

Question: How do I receive these benefits?

Answer: VA encourages anyone who thinks they may be eligible for benefits and care under the PACT Act to file a claim. American Legion department service officers (DSOs) stand ready to assist veterans with their VA claims at no charge.

For more information on the PACT Act, click here.