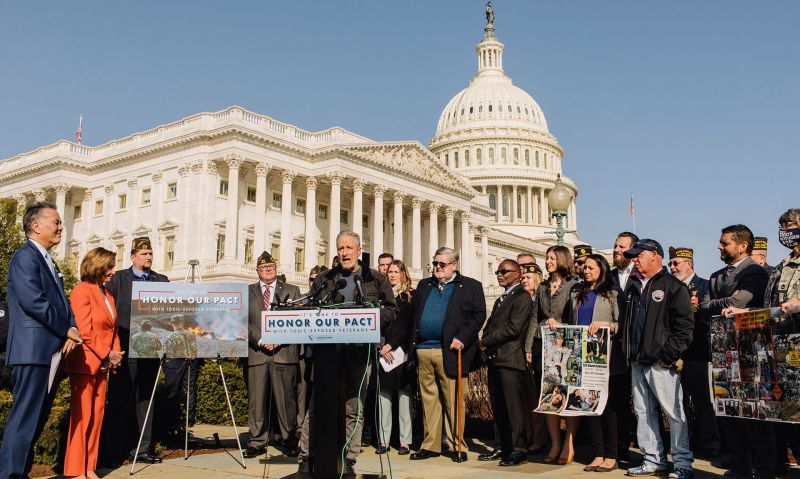 Jon Stewart speaks during a press conference hosted by  House Committee on Veterans’ Affairs Chairman Mark Takano (D-Calif.) at the House Triangle in Washington, D.C, on March 2, 2022, to highlight the urgent need to pass the Honoring our Promise to Address Comprehensive Toxics Act of 2021 or Honoring our PACT Act on the House floor. Photo by Jason Andrew

As of Oct. 1, the Department of Veterans Affairs (VA) has expanded and extended eligibility for VA health care for certain veterans of the Gulf Wars and post-9/11 under the PACT Act. Post-9/11 veterans who did not previously enroll in VA health care now have a one-year window to enroll if they:

- Served on active duty in a theater of combat operations during a period of war after the Persian Gulf War; or

Also eligible for care are Vietnam-era veterans who served in the following locations and time periods:

“This expansion will bring generations of new veterans into VA health care, and increase the health-care benefits of many more, which will result in the one outcome that matters most: better health outcomes for veterans,” said VA Secretary Denis McDonough. “I highly encourage these veterans to apply now for the health care they’ve earned and deserve.”

Eligible veterans and survivors are encouraged to apply for those benefits now at VA.gov/PACT.

The expansion of PACT Act-related health-care eligibility will be phased in over the coming years. However, VA has made all conditions outlined in the PACT Act presumptive for benefits as of Aug. 10, 2022, when President Biden signed it into law.