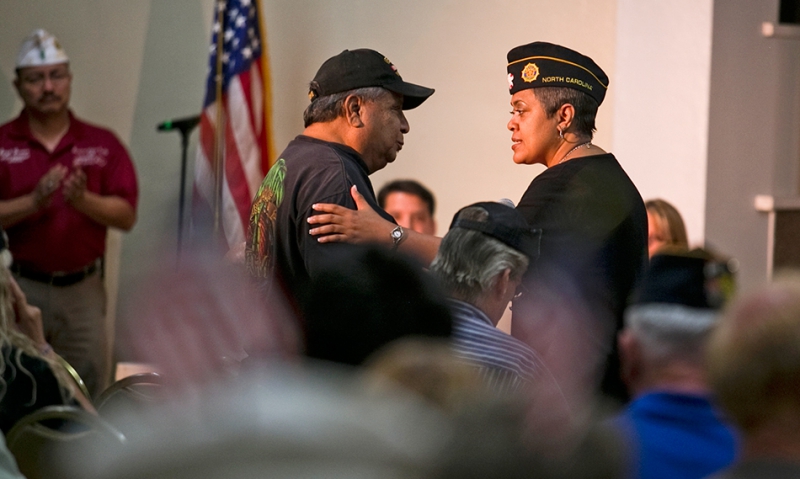 A patient at the Phoenix VA Medical Center talks with the Legion's Verna Jones during a Legion town hall meeting last June. (Photo by Nick Cote)

Helman had been on paid administrative leave for nearly six months since whistleblowers told national media that Arizona veterans had died waiting on secret lists for medical appointments that were never scheduled. That revelation last spring was followed by more than 20 additional allegations of falsified records and other problems in VA leadership, including financial bonuses paid to directors on the basis of the falsified records, at facilities throughout the country.

“Since it came to light that as many as 40 veterans in Phoenix lost their lives while their names languished on secret lists, The American Legion has been demanding accountability from those responsible,” Helm said. “This is one long-overdue step in a journey that is far from over. Unfortunately, as we all soon discovered after the story broke last April, this problem was not isolated to Phoenix. It was widespread, and we expect to see additional consequences, even criminal charges if they are warranted, for anyone who knowingly misled veterans and denied them access to medical services. The termination of one director does not end this scandal, but it is a step.”

The American Legion called for the resignations of VA Secretary Eric Shinseki, Under Secretary for Health Robert Petzel and Under Secretary for Benefits Allison Hickey after the allegations of falsified appointment documentation came to light in May. Petzel and Shinseki both resigned before June 1, but Hickey remains at her post. “We are closely monitoring the backlog of VA benefits claims as well because, like delayed appointments, they are a barrier to care,” Helm said.

The American Legion has conducted a series of Veterans Crisis Command Centers and town hall Meetings nationwide since June where thousands of veterans and their families received assistance speeding up appointment times, getting decisions on long-undecided benefits claims and help breaking down other barriers to care and service from VA. The first of those events, June 9-13, was provided in Phoenix where The American Legion gave firsthand assistance to no fewer than 590 veterans. In late October, the events were renamed Veterans Benefits Centers, and they are scheduled to continue into 2015.

“These events were renamed because we are now making progress, working with VA and veterans in affected areas, because we fully believe that trust can be restored,” Helm said. “It is no longer a crisis, by definition. But it is a process, and VA has a long way to go. Today’s decision, and the additional consequences we expect to come sooner rather than later, advanced the process.”