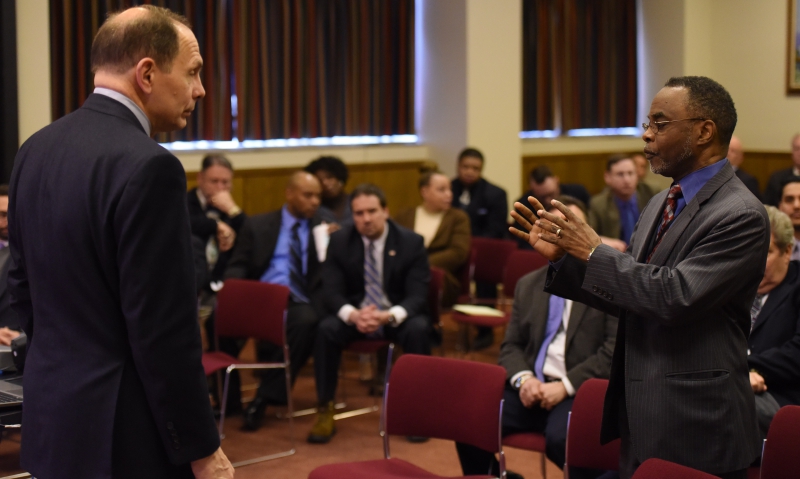 The American Legion has said on multiple occasions that while it is the Department of Veterans Affairs harshest critic, it is also its staunchest ally. The former was evident last spring, when the Legion called for the resignation of then-VA Secretary Eric Shinseki.

But the long-time partnership between the Legion and VA was on display Feb. 19 when VA Secretary Bob McDonald stopped by the Legion’s Washington office to talk with National Commander Michael D. Helm and Legion staff for more than two hours. It was the first time McDonald – who took charge of the department in July – has gone to a veterans service organization’s office to meet directly with its staff.

McDonald met privately with Helm and Verna Jones, executive director of the Legion’s D.C. office, before having a town hall-type session with the office’s staff. He gave an overview of VA’s progress and shortcomings before answering questions from Legion staff.

McDonald said VA now has the perfect opportunity “to get the capacity of VA right for the need of the veterans. I need your help to make sure we get the help we need from Congress.”

McDonald showed staff a series of charts indicating an aging Vietnam veterans population which led to the VA crisis that broke out last spring. "I talk about VA being the canary in the coal mine,” he said. “We see things that are important in American medicine before American medicine sees them. Well, guess what’s happening in the American medical system? The population’s aging.”

McDonald said the amount of claims submitted to VA went up 47 percent, stretching the system. And while more than 8,500 health-care professionals have been hired in the past six months, “there are still parts of the country where we can’t find the doctor we need in the specialty we need,” McDonald said. “We’re working hard on that.”

Aging infrastructure also has hindered VA’s efforts, McDonald said. Another 10 million square feet of space is going unused or being under-utilized, McDonald said, because Congress won’t let VA close or repurpose the buildings. “That costs us $25 million a year in incremental expenses to operate,” he said.

McDonald, the former CEO of Procter & Gamble, said he’s asked Congress for the flexibility to run VA like a business. He pointed to the fact that the number of veterans using VA’s Choice Card program is less than VA anticipated. Approximately 24,000 veterans have scheduled appointments through the program.

“Let’s not let this money that’s already appropriated (for the Choice Card program) not get spent,” McDonald said. “That’s the situation we’re in right now.”

To increase the Choice Card numbers, McDonald showed a new Choice Card PSA that had not been shown to any other groups outside of VA. The PSA will appear on VA’s website and be shared with other VSOs.

On the topic of post-traumatic stress disorder, McDonald said he thinks the Oscar-nominated film “American Sniper” will “win lots of Oscars” while creating a dialog about veterans in general.

But those who do have PTSD have a treatable disease, McDonald said. Getting people connected to the VA is the way to treat PTSD, he said.

After his presentation, McDonald took questions from staff that included issues with the Choice Card program, wait times for VA appeals and VA’s military skills translator. He closed by telling the Legion that it and the VA are in this together,

“We can’t do it by ourselves,” McDonald told Legion staff. “We know you’re important. And we’re right around the corner. If you need anything … call us. We’ll do the best we can. Just be patient with us. We’re trying to turn a big ship, and unfortunately we’re not in total control of it.

Louis Celli, director of the Legion’s Veterans Affairs & Rehabilitation Division, said McDonald’s visit to the Legion’s office says a lot about both the relationship between the Legion and the department, and the Legion’s role in helping the nation’s veterans.

“I think it says a lot about the credibility of The American Legion,” Celli said. “This was something he was excited to do. He came up with the town hall idea. He embraced it, mainly because we think it’s important that … the veterans we represent know that we have that unfiltered relationship so that we can … ask hard questions. He can sit here with us and tell us the things that are going wrong. He admitted there are a lot of things to fix.

“We have to remember that he’s only been here six months. It takes people six months just to get off probation in other jobs. In six months, he’s had a good opportunity … to realize what does need to be changed. I think that’s important.”