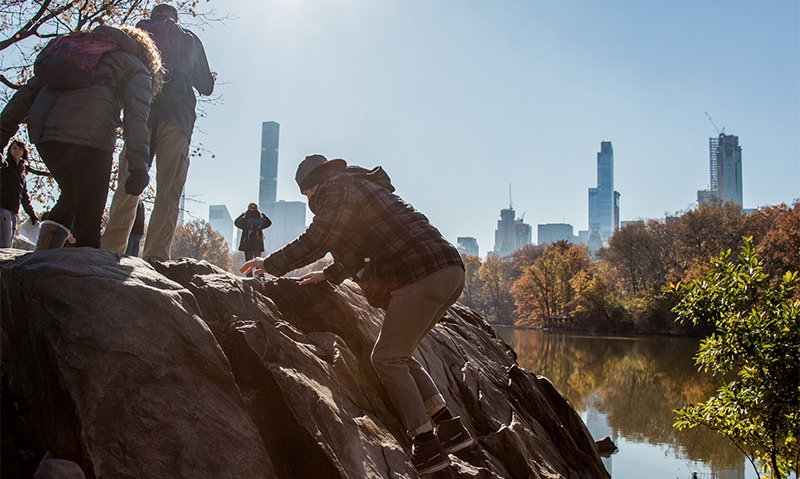 “Nature,” says Aaron Leonard, a retired U.S. Army lieutenant colonel with more than 1,400 days of combat service from Desert Storm to Iraq behind him, “will work some magic on you.”

On a recent visit to the Bronx VA Vet Center in New York, he and yoga instructor Leslie Hoellger had little trouble convincing counselors about that particular brand of magic for veterans who cope with post-traumatic stress disorder, traumatic brain injury, single motherhood or the not-so-simple challenges of readjustment to civilian life. For many, Leonard and Hoellger contend, the best therapy is fresh air, muscle movement, mindful awareness, a respite from digital media and connections with others who understand. The Vet Center staff was in full agreement as plans were made to conduct a Black Friday geocaching hike for veterans through Central Park in Manhattan.

Leonard, northeast coordinator of the Sierra Club Military Outdoors program, has seen the positive results of such activities since he was a major stationed at Fort Hood, Texas, when he would lead weeklong outdoor excursions for at-risk military personnel. “We did it for a couple of years, and it really worked well,” he says.

Today, he and Hoellger are helping advance a Sierra Club initiative that Leonard says can be traced back to 1903 when conservationist John Muir and President Theodore Roosevelt trekked through what would become Yosemite National Park in California three years later. “We consider that to be our first veteran outing,” Leonard says. The Sierra Club would later help train World War II soldiers of the 10th Mountain Division for alpine battle. “The Sierra Club – a lot of people don’t know this – has always had a strong military connection.”

Since its inception in 2006, the volunteer-run Sierra Club Military Outdoors program has facilitated activities for more than 70,000 veterans and their families. “We know that time spent outdoors can help foster a sense of teamwork, mission and purpose that veterans may be missing once they return home,” the program’s website explains. The 3 million member Sierra Club, with chapters throughout the country, also provides training and support for other groups that conduct “adventure-therapy” for veterans and their families.

“We teach basic protocols on how to lead trips,” Leonard says. “We like to partner with veterans organizations and train other groups to do what they already do, safer, and to get the most out of an outdoor activity.”

“Sierra Club teaches you how to be safe – the policies of procedure for an outdoor activity,” says Overland, Kan., American Legion member Dave Stroman, a Vietnam War veteran and retired U.S. Army sergeant major who serves as a Veterans Treatment Court counselor in the Kansas City area. “They do what they call a ‘walk and talk.’ Everybody stays together and moves as a group – go and stop – stop along the trail to go over a point or two. Another part of it is the first aid – procedures for broken bones, falls or losing someone.”

Stroman, a Sierra Club-trained volunteer leader who has coped with his own PTSD, says he conducts outdoor activities to help those who have come through the Veterans Treatment Court program in his area. Sierra Club training, insurance and funding for outings provide essential resources and support, he says. He also conducts cowboy action shooting activities for veterans, “… shooting lead bullets at steel targets. Talk about therapeutic. I call it fun with a gun. It attracts the right kind of folks. What they say about cowboy action shooting is that you come for the shooting, but you stay for the people.”

The same can be said about the Sierra Club program, which Leonard says works well because the experiences are conducted on a veteran-to-veteran basis. “Our program is designed by people like me. We’re veterans, not clinicians.”

Having completed leadership training for 41 volunteers in the Northeast, Leonard and the Sierra Club are looking to expand the program, involve more local veterans service organizations like The American Legion, and offer healthy alternatives to prescription drugs for those who deal with PTSD, TBI or other conditions related to military service and the return to civilian life. “I went to Vietnam as an infantryman, and I did that,” Stroman says. “I don’t think there is any way – then or now – that you can prepare you for that experience. That stuff stays with you the rest of your life. And drugs are not the answer. I am just dead-set against that.”

“We try to make the outings family-friendly,” Leonard says. “And they are always free. Typically, the veteran just has to get to the starting point.” If lacking gear, veterans will be provided what they need to have safe and successful outings. “We eliminate the most common constraints – time and money.”

The Sierra Club Military Outdoors program has taken veterans as far away as the Arctic National Wildlife Refuge in Alaska and conducts training for such activities as ice climbing, he says, but opportunities for natural engagement – and what he calls “digital detox” from the constant throb of smartphones and computers – can be found much closer to home, no matter the degree of difficulty the veteran is willing or able to accept. “You would be surprised how much natural space there is, no matter where you are,” he explains.

The Sierra Club’s northeast program is now working with Weill Cornell Medicine on a program to involve single veteran mothers, about 2,000 of whom live in the New York City area, to research and report data on the therapeutic value of outdoor activity close to home for those who are simultaneously struggling with the challenges of military-to-civilian transition and single parenthood.

The program also offers for veterans, especially those with PTSD, what is termed as “Mindful Yoga Therapy.” That approach, instructed by Hoellger, “is a combination of breathing, meditating, gratitude and some poses – it allows you to control your life,” she says. “We can’t control what happens to us, but we can control how we respond. It’s a very restorative practice.”

Mindful Yoga Therapy (www.mindfulyogatherapy.org) is a nonprofit initiative that offers veterans with PTSD opportunities to find inner calm and steadiness. Supported by the Give Back Yoga Foundation, the veteran-specific practice is described by U.S. Air Force Capt. Dulia Mora-Turner, a certified yoga instructor who has guided programs for servicemembers and veterans worldwide, as “a powerful tool to promote tranquility and healing … for a teacher, there is nothing more rewarding than completing a hero’s yoga practice and feeling the joy and tranquility permeating that space. As a veteran, practicing yoga, the feeling of connection to other warriors, and the sense of being safe and grounded while nurturing rest and healing, is priceless.”

“It can be used for anyone who has gone through a trauma,” Hoellger says.

Stroman says the end-of-session “corpse pose” in which participants lie still and focus on relaxation after yoga has been especially helpful to him. “I love it,” he says. “I used to have trouble sleeping, but it really helps me to be still and think about relaxing every muscle one at a time. And I like the stretching – I’m not in it to build muscle.”

Connecting yoga and outdoor activity is a natural fit, Hoellger says. “You’re outside, so you’re already being a little more mindful. And the yoga is very basic. It just feels good to do.”

“Our generation of veterans is looking for alternatives to traditional therapy,” says Jon Turner of Vermont, a U.S. Marine Corps veteran who in 2006 sustained traumatic brain injuries twice in a 14-hour span in Iraq. “The transition process is difficult. I spent a lot of time in the woods with my dog. That really helped.”

Soon after his discharge, Turner found that being outdoors and close to the earth was a powerful treatment for his condition and readjustment. “I came up here to visit a high school buddy a month after I got out, and I fell in love with the place. There is something to be said about biology and ecology of the natural world. You’re engaged in something that is far greater than you would ever have imagined.”

“Going outdoors, getting into the mountains, is just therapeutic,” Stroman says. “I don’t know that it’s for everybody, but I know it works for me. Once you break the umbilical cord – the smart phones and social media – that’s the therapeutic part. We care about each other. That’s hard to do when you’re connected to all these other things.”

Turner, a member of American Legion Post 19 in Bristol, Vt., finds the Sierra Club Military Outdoors program and Mindful Yoga Therapy to share certain therapeutic values with the Farmer Veteran Coalition of Vermont, a network of veterans who work and find readjustment benefits through agriculture. “We have made some really amazing connections with veterans organizations to bring awareness of the value of agriculture for veterans, whether they have had trauma or not,” Turner says, adding that getting young veterans connected in their communities through agricultural production is an essential ingredient not just for those who served but also for society, as the average age of farmers ebbs higher.

Operating Wild Roots Farm Vermont (www.wildrootsfarmvermont.com), Turner works on a weekly basis to connect veterans and agricultural organizations in the state, including a Veterans Homestead Series of instructional activities for those who served and for their families.

A trained Sierra Club Military Outdoors program leader whose wife is also a yoga instructor, Turner says the importance of holistic experiences in nature cannot be overstated for those in transition. “I truly believe it has a profound impact on your life,” he says. “I think it’s really important that it’s veteran-to-veteran. That’s when the deep dark comes out, which needs to be addressed sometimes. But I think it’s also important to get the non-veteran community into it, too, because that’s part of the process.”

Stroman sees outdoor engagement programs like the Sierra Club outings as a way to build networks among younger veterans who can share the benefits of natural experiences together, so he is trying to recruit volunteer leaders from the post-9/11 generation to get involved. “I’ve learned that I’m a couple of generations ahead of these guys,” he says. “We don’t always relate to the same things. The younger guys need to do it. I’m available as a mentor, but this is their group.”

That’s what Leonard, Hoellger and Turner see as a complementary opportunity for The American Legion and other established veterans organizations. “We’re building community-based, grassroots groups,” Leonard says. “And after an outing, what we see is these veterans get back together over and over again.”

“Camaraderie,” explains Stroman, “really helps. We care about each other.”

Those interested in becoming trained volunteer outings leaders or learning more about the Sierra Club Military Outdoors program can visit www.sc.org/military or email Leonard at Aaron.Leonard@sierraclub.org.