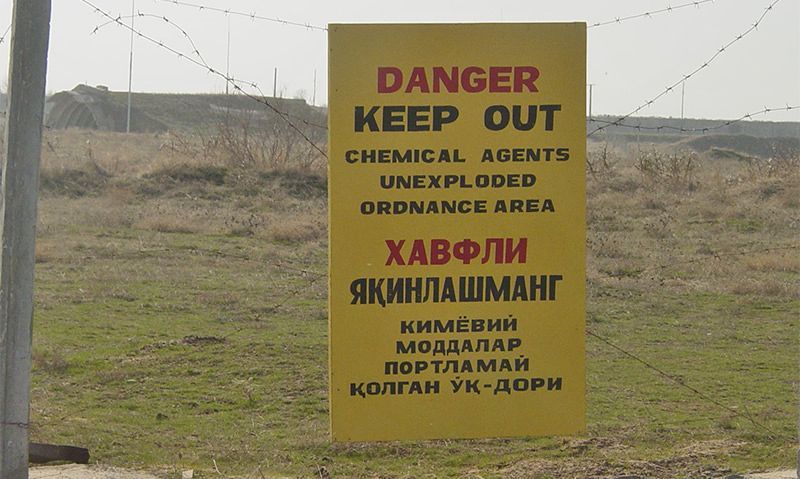 A sign by the running track at K2. Mark Jackson used the sign as a marker for his laps when he ran every morning. Photo by Ed Dejesus

The federal government is taking its first steps toward formally acknowledging U.S. troops were stationed at a secret base in Uzbekistan where veterans say they were exposed to toxic hazards that have caused deadly diseases and illnesses.

President Donald Trump signed legislation Jan. 5 requires VA and the Agency for Toxic Substances and Disease Registry to conduct a 10-year study of cancers and other diseases among Karshi-Khanabad (K2) veterans. The Veterans Health Care and Benefits Improvement Act of 2020 also opens VA’s burn pit registry to servicemembers who served at the former Soviet base in southern Uzbekistan.

Trump also is considering an executive order allowing former servicemembers who served at K2 to apply for the same VA care and benefits as veterans who were exposed to burn pits or depleted uranium in Afghanistan. In addition, a provision in the National Defense Authorization Act directs DoD to conduct an epidemiological study of toxic exposure among K2 veterans.

None of these measures provide presumptive service connection that would require VA to cover health-care costs for K2 veterans who are dealing with rare cancers and other illnesses they believe were caused by toxic exposures at the base. However, the executive order and NDAA directive are steps toward the federal government’s acknowledgement of the base’s hazardous legacy, K2 veterans say.

The United States leased part of the base from the Uzbek government soon after the 9/11 attacks and established Camp Stronghold Freedom about 100 miles from the Afghan border. An estimated 15,000 U.S. servicemembers were deployed there between 2001 and 2005. They were exposed to toxic chemicals, high levels of radiation, jet fuel and other hazardous waste that permeated the area where they worked and lived, according to K2 veterans and declassified government documents. But they haven’t qualified for VA care and benefits for K2-related health issues because, until late December, military service in Uzbekistan wasn’t recognized in federal law or regulation, says Mark Jackson, a K2 veteran and legislative director of the Stronghold Freedom Foundation.

The American Legion, long a leading advocate for veterans exposed to Agent Orange, radiation, chemicals, Gulf War related hazards, burn pits, and other contaminants, says K2 veterans should get immediate help. This includes VA providing medical exams and treatment for former servicemembers who are dealing with illnesses tied to toxic exposures at K2 as well and assessing the risks the exposures pose for their children, says Ralph Bozella, chairman of The American Legion’s Veterans Affairs & Rehabilitation Commission. “In the meantime, we need go to Congress and fight for service-connected disabilities related to their service at K2 and the resulting diseases,” Bozella says. “And for full funding of research and new treatments for these diseases.”

Since 2016, The American Legion also has called for DoD to disclose all hazardous environmental exposures at any facilities used by U.S. troops so they can seek appropriate medical treatment, Bozella says. In addition, The American Legion is advocating for VA to establish a national center for research on the diagnosis and treatment of health conditions of the descendants of servicemembers who were exposed to toxic substances. “The government has to be cognizant of any environmental hazards and needs to protect these veterans and their offspring,” Bozella says.

Over the past year, representatives of the Stronghold Freedom Foundation contacted every member of Congress in an effort to secure federal legislation making K2 veterans eligible for VA service connection status that would open the door to care and disability compensation. Their efforts led to congressional hearings that ultimately forced DoD to declassify some of the environmental surveys it conducted at the base, as well as the executive order President Trump is considering, and the provision for a K2 study in the NDAA.

No matter what happens with these measures, K2 veterans will be back fighting for presumptive VA service connection in the new session of Congress this year – not only for the sake of the veterans, but for the families who are left behind. “You’ve got fathers and mothers, brothers and sisters, husbands and wives and friends dying,” says Kim Brooks, Family Care Team and Surviving Spouse director for the Stronghold Freedom Foundation. Her 36-year-old husband, Tim, died of a rare brain cancer in 2004 – two years after returning from K2. “As it becomes clearer and clearer that more and more K2 veterans have developed and are developing cancers, pulmonary disorders and other toxicogenic conditions, Congress must act.”