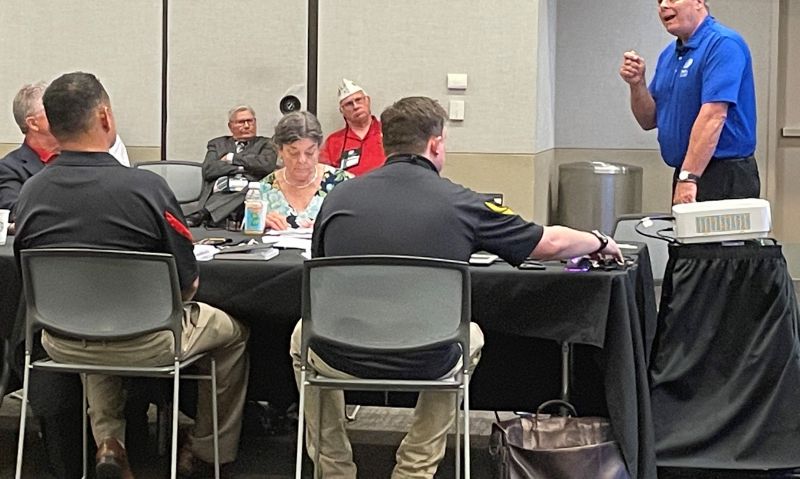 In addition to serving as University of Memphis president, Dr. M. David Rudd also has on his résumé being a nationally known researcher in the fields of mental illness and suicide among veterans and servicemembers.

A member of the American Legion Department of Montana and U.S. Army veteran, Rudd is a licensed psychologist, and the co-founder and Scientific Director of the National Center for Veterans Studies at the University of Utah. And he’s served on the Institute of Medicine/National Academies of Science Committee on Assessment of Resiliency and Prevention Programs for Mental and Behavioral Health in Service Members and Their Families, chairing a workshop on suicide and serious mental illness for the National Academies.

Rudd brought his vast experience of studying the causes behind veteran and military suicides to The American Legion on Aug. 27 when he addressed the organization’s TBI/PTSD Suicide Prevention Committee in Phoenix.

Rudd said that suicide isn’t about mental illness. “You really have to rethink what suicide risk is about,” he said. “That vast majority of people struggling with mental illness don’t make suicide attempts (and) don’t kill themselves. It’s about capacity to self-manage during periods of acute upset. There are problems and consequences to combat exposure, deployment and just performing for 20 years at a heightened operational tempo that create problems that people don’t understand.

“So part of the treatments we’ve developed, they just explain those problems. And we don’t explain it as a function of mental illness. We explain it as a normal consequence of 20 years of this happening.”

Rather than mental illness, Rudd said reasons to consider suicide come from “hyperarousal disorder. If you are in a combat zone, or you are deployed or stateside and operating at twice the normal operational tempo, the normal adjustment is to get hyper-aroused. What happens is your body acclimates to that. The thing you want to be in a combat zone is hyper-aroused or hyper-aware. That’s what saves your life. The problem is that when you come back, that doesn’t change. You’re still hyper-aroused, and it creates enormous problems.”

Rudd said treating that problem starts with helping people understand the disorder. “We help them learn how to re-regulate,” he said. “We don’t tell them they have (post-traumatic stress disorder). We tell them ‘you’re hyper-aroused because of this constant exposure that requires it. Now you’re back and you don’t have to be hyper-aroused. So let’s explain to you how to do that. Let’s explain to you how to train your body not to be hyper-aroused when you’re around your family, around loved ones … and when you’re at work.’ We teach that skill. We teach that emotion regulation skill. It’s highly effective.”

Rudd’s National Center for Veterans Studies has partnered the Los Angeles chapter of Volunteers of America and developers to create an app to assist veterans approaching or in crisis. The app includes “an intervention on understanding guilt and shame and explaining to people that they feel a lot alike,” Rudd said. “But you know what feels very much like guilt and shame? Grief. Oftentimes, what happens is active-duty and veterans confuse grief for guilt and shame.

Rudd said the average amount of time between the initial onset of an issue and the seeking of treatment is 11 years. “That is treatment hesitancy,” he said. “So probably what we ought to stop doing is telling people to go to treatment. What we ought to do is create interventions that are more accessible, that don’t require people to sit down with somebody and feel all that guilt and shame, because some people can’t manage it effectively yet. What we’re discovering is people will go do a phone app treatment and then ask to do a follow-up treatment in person. That’s what we’re trying to make accessible.”

Rudd said there is no more “worthy cause” than reducing military and veteran suicide. “But I’ll also tell you that veterans are incredibly resilient,” he said. “The fact that 80 percent of veterans don’t (exhibit mental health) problems is remarkable, and we need to talk more about that.”

Columbia University professor emerita Dr. Jeanne Stellman, who in the 1980s teamed with her husband Steven and The American Legion to conduct a ground-breaking study linking Vietnam War veterans’ illnesses to Agent Orange sprayed by the U.S. military as a herbicide and defoliant, also briefed the committee.

Stellman shared the latest results from the continuation of studies she’s conducted on Vietnam veterans, the first in 1984 and the second in 1998. The survey looks for connections between PTSD, traumatic brain injuries and depression with later diagnoses of heart disease, high blood pressure, stomach ulcers and arthritis

Stellman completed the third round of the survey in summer 2020, reaching out to 729 veterans who had responded to the 1984 and 1998 surveys. Seventy-four percent responded this time, all who served in-country during the Vietnam War.

While Stellman said suicide prevention efforts are critical, suicide itself “is a very, very, very tiny part of the burden that veterans have borne from their time in Vietnam. That includes the same level of psychological distress experienced by the veterans as was shown in the 1984 survey.

“What we have … is a continual lifetime of symptomatology that’s associated with having been in a combat situation,” Stellman said. “One of the ways that this plays out is in something called the metabolic syndrome. Your body responds to stress, and that stress response is related to heart disease, it’s related to diabetes, it’s related to coronary (disease), to stroke and hypertension. It’s all part of the metabolic syndrome.”

Stellman shared a graph that showed that individuals in the study experiencing some form of PTSD continue to stay steady. “In the world of mortality studies, these are very, very high numbers,” she said. “We’re talking about large numbers of people who are walking around in this situation.”

Stellman said the study showed that veterans who are struggling financially have a four-and-a-half greater risk of having PTSD that those able to meet their financial demands. But she also pointed out a few positives from the survey, including usage of Department of Veterans Affairs’ resources is up among the survey respondents, and that VA now is asking more PTSD-related question of those patients seeking psychiatric help.

“That is a total sea change,” Stellman said, praising The American Legion’s lobbying efforts for helping bring that change about. “I was staggered when I saw that.”