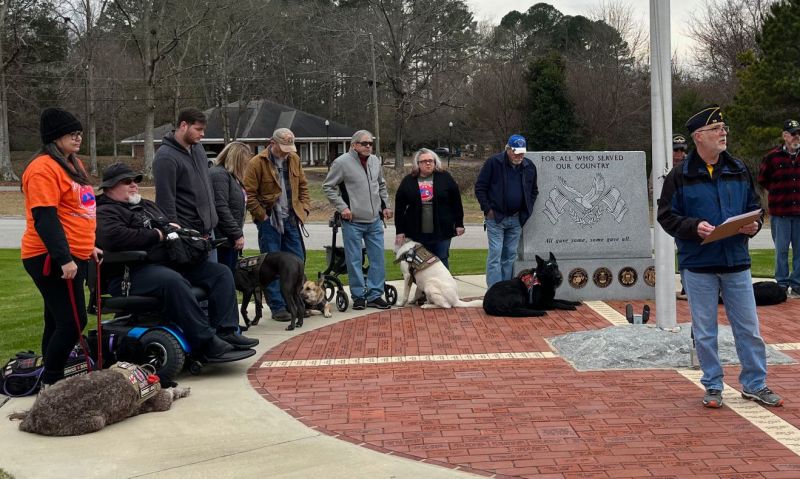 As events unfolded in the Middle East late last summer, and their impact continued to affect veterans moving forward, members of Hezzie Griffis American Legion Post 30 in Edgefield, S.C., were motivated to do something along the lines of The American Legion’s relatively new motto.

And then they did something, staging a fundraiser that will assist disabled veterans in their community to connect with a valuable form of treatment: service dogs.

Last November Post 30 staged a fundraiser for local nonprofit Veterans K9 Solutions, which rescues shelter dogs to train them as service dogs. And earlier this month, the post presented the results of that fundraiser, more than $4,000 to the nonprofits founder and CEO, Jerry Lyda.

“As ‘Veterans Strengthening America,’ we wanted to do something that would help our veteran community,” said Post 30 Legionnaire Winston Boddie, who co-led the effort with former Post 30 Commander Suzy Spurgeon to organize the fundraiser. “With a lot of changes going on in the military … the drawdown in Afghanistan, the rise in what we saw in psychological problems in our veterans. That, and the need for service dogs, led us to say, ‘hey, let’s do an event that will help our veterans in that way.’”

That led to the post’s first-ever Service Dog Dash 5K on Nov. 13. Advertising the event through various media channels, Post 30 invited members of the community – human and canine – to participate in either a 5K or a one-mile run. The event coincided with Edgefield’s 2nd Saturday Market at Piedmont Technical College, where participants could enjoy lunch afterward and take part in a ceremony put on by the post.

After all the totals were tallied, Post 30 had been able to raise $4,600 that it donated to Veterans K9 Solutions. “It was more than we envisioned,” Boddie said, while praising both the event’s sponsors and volunteers. “We didn’t really have a goal in mind, but when we saw (the total raised), we were like ‘wow.’”

Boddie said members of Post 30 already knew Lyda and his organization before the idea for the fundraiser came about, as well as veterans who were benefiting from the nonprofit’s service dogs. Over 10 years, Veteran K9 Solutions has trained more than 200 shelter dogs to serve as companions for veterans.

“We have people in our community who have service dogs from that organization,” Boddie said. “A veteran who needs a service dog has forever given a piece of him or herself in service to our country. When a veteran receives a service dog, they are restored in part measure. They gain a companion and a source of strength. As the veteran gains strength, so do our communities. And strong communities supply the framework that enables us to raise healthy families.”

Boddie said the post is considering making the fundraiser – which he said would not have been a success without the leadership of current Post Commander Tommy Tripp, Adjutant Jane Doolittle and all of the post membership – an annual event. He said it’s an extension of what the post has meant to its small community for years.

“Post 30 has been a bedrock of the Edgefield community for decades, and this event was a continuation of the community support it has always provided,” Boddie said. “It has built a legacy of community support, and that legacy is what helped to make this event successful. We plan to use the momentum to build our membership and host more events that help our veterans and community.”