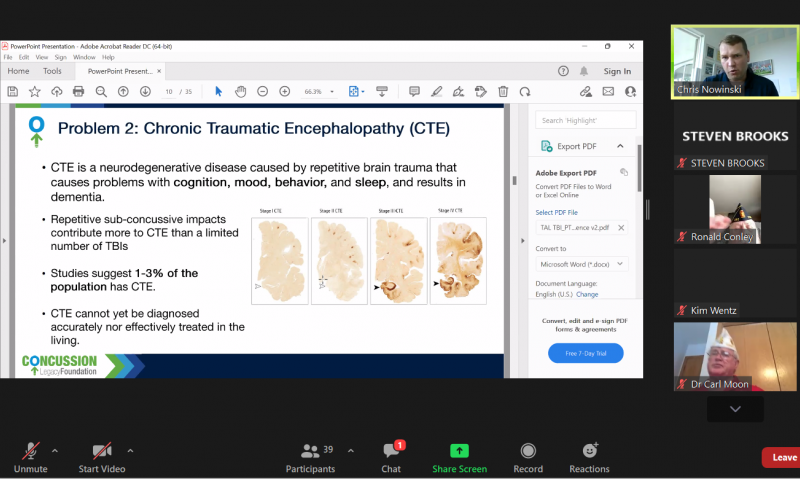 In the January 2020 American Legion Magazine, the efforts of the Concussion Legacy Foundation (CLF) were featured. In addition to highlighting its mission of supporting those affected by concussions and Chronic Traumatic Encephalopathy (CTE), and ending CTE through prevention and research, the article also had an ask: for anyone – veterans, former athletes and anyone willing to do so – to pledge to donate their brains following their death to the Department of Veterans Affairs-Boston University-CLF Brain Bank at the VA Boston Healthcare System’s Jamaica Plain campus.

And less than a month after the issue of the magazine hit mailboxes, more than 330 veterans and military brains were pledged to CLF’s Project Enlist program. Eventually, CLF Co-Founder and CEO Chris Nowinski told members of The American Legion TBI/PTSD Suicide Prevention Committee on March 5, that number reached nearly 500 pledges – more than twice the amount of pledges the foundation had received the entire previous year.

Nowinski made a similar request during the committee’s virtual 2022 Washington Conference meeting, noting that the following year CLF received a record 10 brain donations from the families of veterans who had passed away. Nowinski said six told the foundation they decided the make the donation after they saw The American Legion Magazine article.

“The big picture is how we can continue to use (The American Legion’s) assistance when reaching veterans to accelerate the rate of brain donations, so that we can understand how to better treat traumatic brain injury and CTE,” Nowinski said. “Why it’s relevant here is that … the research I’m sure you’re aware of that already connects mild traumatic injuries to an increased risk of suicide. We’re also seeing suicide is a very common cause of death in our (CTE) population because it causes changes in the way you think, changes in impulse control, emotions. But we don’t even know how to diagnose CTE in living people. We only can diagnose post-mortem, which is why brain donation is so important.”

“We appreciate everything you guys are doing to slow and stem this terrible suicide epidemic. Project Enlist is really trying to move upstream a little bit. We know that some percent of people dying by suicide, that brain injury, and potentially CTE, is sort of the inciting event. It’s the thing that’s changed the way their brain functions. So, by studying these brains, we’ll better understand both how to identify who is at risk for this, who has had a brain injury that is changing the way they function. And then also how do we diagnose it and how to we treat it.”

Nowinski was an All-Ivy League football player at Harvard University before a brief career in World Wrestling Entertainment, where a kick to a chin caused him Post-Concussion Syndrome and ended his career. He said that those who play higher levels of football are a high risk for concussion, “and they’re coming into the military with a concussion history. That’s what’s becoming clear, especially with the CTE risk, is that if you’re a former college football player who then joins the military, you already have a risk factor for CTE. And then your service compounds it.”

Nowinski said it’s more difficult for the foundation to get brains donated by veterans’ families than those of professional athletes – specifically referencing the National Football League. “We now get the brains of one in three NFL players who died each year, which is sort of an unprecedented sample in any population ever,” he said. “When NFL players die, it becomes news within hours. The team puts out a statement. It’s all over the Internet, and we are actually able to find and track down families. We don’t get that head start with veterans. With most of the veterans’ brains that are going to us, the family has to initiate reaching out.”

Nowinski believes increasing the Brain Bank’s sample size of veterans’ brains can lead to real inroads in critical research. “There definitely is a perfect storm when we are learning that our veterans have exposure to TBI, develop PTSD … and then some of them are developing CTE,” he said. “We already know there’s a relationship between TBI and PTSD. But CTE is this mystery third element that nobody is really talking about in the military. This is part of Project Enlist. I’ve been living in the brain bank world for the last 15 years. Studying the brain under a microscope is really how we unlock the mysteries of what exactly is going wrong, and how can we identify places to stop the degeneration or fix it.

The CLF’s short-term goal for Project Enlist is to diagnose 100 CTE case among veterans exposed to a blast or TBI while serving. The hope is to create a culture of brain donation within the veteran community in order to develop effective treatments for CTE, TBI and PTSD.

The American Legion Magazine article has played “a large role in accelerating this research,” Nowinski told the committee. “The reality is we all lose people close to us. That’s really where you can activate and help make something positive come out of a tragedy.”