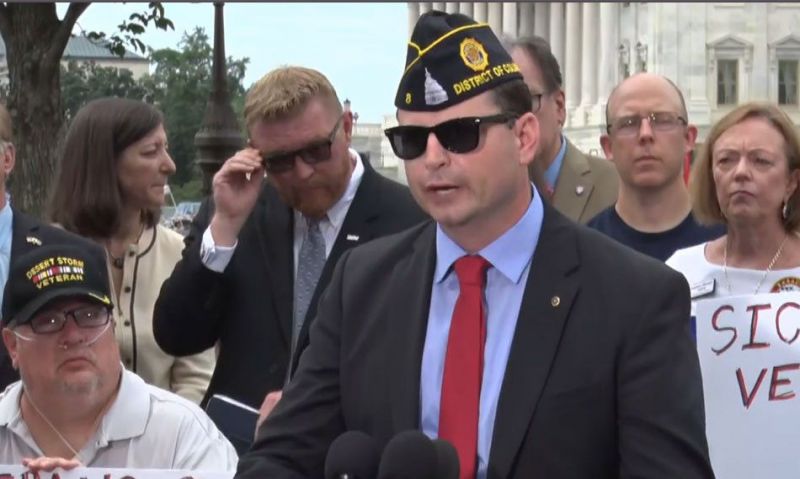 The American Legion and other veterans advocates gathered in Washington, D.C., today to criticize a Senate vote that again has delayed passage of what is known as the PACT Act.

The Promise to Address Comprehensive Toxics Act – which has passed in both the House and Senate – received technical corrections and went to a procedural vote in the Senate on Wednesday. The 55-42 vote failed to meet the 60 votes necessary to advance the legislation.

Speaking for The American Legion during a Thursday press event on Capitol Hill, American Legion Legislative Director Lawrence Montreuil called the delay “absolutely unacceptable. A bill that passed the House of Representatives three times and passed the Senate with wide-ranging bipartisan support – 84 senators voting in favor of it – will now be delayed, and once again veterans will suffer.

“The PACT Act passed the House and Senate in a bipartisan manner, yet this delay continues because of political games. There is no reason this bill should not be signed by the president by the end of next week.”

Montreuil said the delay impacts toxic-exposed veterans who already have had to wait long enough for their care and benefits.

“This bill’s genesis came from the fact that 70 percent of veterans with illnesses related to burn pits were being denied, and as a result couldn’t access health care. Sick veterans couldn’t meet the burden of proof,” Montreuil said. “Every day that this delay goes on, veterans are unable to receive care. This is wrong. We will not stand by and allow veterans to be denied their duly owed health care. For cancer patients, a one-month delay makes all the difference. The American Legion demands that Congress end this delay and allow our veterans to receive the health care they desperately need and have earned.”

The PACT Act provides a comprehensive framework to improve the presumptive process for burn pit veterans by streamlining access to health-care benefits for those who served in areas of known toxic exposure — regardless of disability status — and provides health care for as many as 3.5 million veterans exposed to airborne hazards and burn pits.

The anger was clear in the members of Congress attending the press event – as was the resolve to continue to work to get the PACT Act from bill to law.

·       U.S. Sen. Jon Tester, chairman of the Senate Committee on Veterans’ Affairs: “We’ve got to get out. We’ve got to call. We’ve got to have your friends in the military and veterans call, your civilian friends call. Because what happened yesterday is totally unacceptable. What happened is they voted against the men and women who fight for this country who want to come back to civilian life and have a normal life. And not only those folks, but their families.”

·       U.S. Senator Kirsten Gillibrand: “How does this happen? How do you change your mind right when you’re about to make a law that’s going to save lives? It makes no sense. It’s an outrage, and there has to be accountability. They have put their politics before the life and wellbeing of servicemembers who have given everything to this country. For what?”

·       U.S. Rep. Mark Takano, House Committee on Veterans’ Affairs chairman: “Frankly, this bill should have passed the House unanimously the first time, and it should have passed unanimously in the Senate. That is how fundamental this issue of taking care of our veterans is. You don't get to pander to servicemembers and veterans about how you represent them and then turn around and stab them in the back.”

·       U.S. Rep. Raul Ruiz: “I’m livid. We have a chance right now to make a monumental change in the lives of our servicemen and women. Our veterans don’t have time for this bill to go back and forth again and again. They need the presumptive benefits in the Honoring Our PACT Act right now. Their lives are, quite literally, on the line. I will continue to fight tooth and nail until it gets done.”

·       House Speaker Nancy Pelosi: “Veterans have waited too long. Why subject them to this? This is very, very disappointing. We all share the dismay in all of this. It’s a missed opportunity that’s hard to explain, but we will not stop until we get the job done.”

·       U.S. Sen. Sherrod Brown: “The Senate’s scheduled to go home after next week to go and do our things in the state and in our districts. We don’t leave here. We stay until this thing is done. We stay here. We keep meeting. It doesn’t matter how hot it is here. It doesn’t matter the pressure. We’ve got to get this done … until veterans are assured they’re going to be taken care of if they were exposed to these burn pits.”

Also visibly upset was former Daily Show host Jon Stewart, who has become an impassioned advocate for the PACT Act. His frustration was evident when referencing previous Senate passage of the PACT Act in June before the technical corrections were needed.

Stewart said while U.S. servicemembers have lived up to their oath, the Senate “spit on them in abject cruelty” with its vote on Wednesday. “These people thought that they could finally breathe. You think their struggles end because the PACT Act passes? All it means is they don’t have to decide between their cancer drugs and their house. It gives them health care. It gives them benefits. It lets them live.”