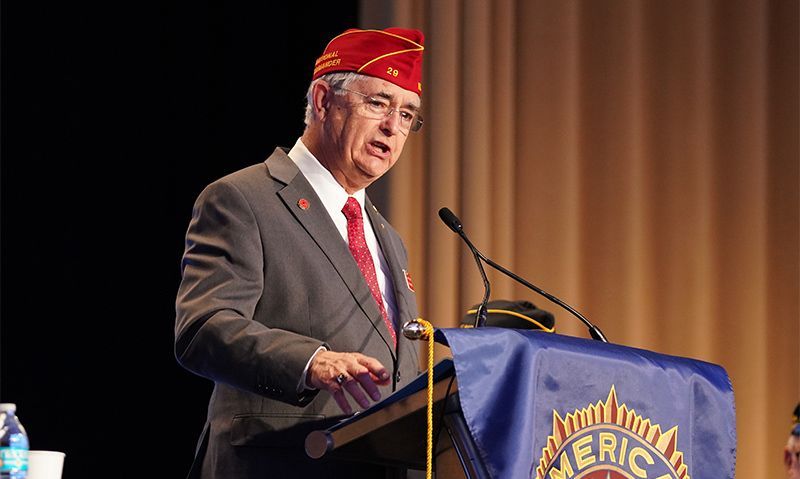 American Legion National Commander Bill Oxford delivered the Commander’s Call on March 10 as part of the organization’s advocacy efforts later in the day on Capitol Hill. During the annual address, the commander called on American Legion Family members to “act Legion.”

It was a play on words, harkening back to last year’s monumental passage of the LEGION Act (Let Everyone Get Involved In Opportunities for National Service Act). The new law means that every veteran on duty since Dec. 7, 1941, is now considered to have served during wartime. By closing the loophole, it honors the service of 1,600 veterans killed or wounded during periods previously not sanctioned as war eras. It also means that more than 4 million veterans will now receive the full benefits of their service, including eligibility to join The American Legion.

Oxford implored American Legion members to “act Legion,” whether or not they are part of this week’s 60th annual Washington Conference. Ten key recommendations:

• Act in a nonpartisan way: “What does act Legion mean?” Oxford asked. “It means being professional, nonpartisan, motivated and knowledgeable. It means reminding your senators, representatives and their staff that they have no higher calling than the care and wellbeing of our America’s veterans, our active-military and their families.”

• Continue to support and improve the Legion’s most important legislative accomplishment, the GI Bill and its descendants. “They all had one purpose in common – that’s helping veterans achieve their dream. Higher education, vocational training and home ownership make dreams possible.” Today, some for-profit schools are targeting veterans, Oxford noted. “Acting Legion means passage of the Protect the GI Bill Act. It means passing the Veterans Education and Taxpayer Spending Act to close the 90-10 loophole, which enables schools to count VA and DoD tuition money as ‘private dollars,’ even though it’s really government dollars that came from the taxpayers.”

• Protect the American flag. Oxford called for a constitutional amendment to protect “our flag — the flag used to cover the caskets of our fallen military heroes — from desecration.”

• Reduce the suicide rate among veterans. Oxford noted that if the United States can spend billions of dollars fighting the coronavirus, it should be able to financially support efforts to reduce the suicide rate among veterans. He recommended Legion Family members help get at-risk veterans into VA so they don’t become a statistic. “We do know that when veterans use the services offered by VA, they are less likely to take their own lives,” he said. “And many of those services offered by VA must include options other than opioids. Counseling and alternative therapies are not only healthier, they are often more effective.”

• Fight for Blue Water Navy Vietnam veterans. The Legion must continue advocating for these veterans and ensuring that their long overdue disability benefits are awarded without further roadblocks, he said.

• Ensure that all servicemembers are paid during government shutdowns. That was a reference to January 2019 when Coast Guardsmen and their families were caught up in the government shutdown. Because the Coast Guard operates under Homeland Security, they were not paid, a loophole the Legion is trying to correct.

• Continue service at home. Oxford cited Legion programs that mentor youth and support veterans in need, as well as the Veterans and Childrens Foundation. The foundation “allows us to train service officers and offer temporary financial assistance for veterans with children in need,” he said. The goal for V&CF is to raise $25 million. (Click here to learn more about how the fund supports service officers and families with minor children.) h

• Salute the Greatest Generation. “In the early 1940s, millions of Americans committed to winning the bloodiest war the world had ever seen. It was won 75 years ago because Legionnaires and non-Legionnaires, acted Legion,” he said.

In conclusion, Oxford connected the organization’s first 100 years to the next century of service to community, states and nation.

“Acting Legion means celebrating our past without sacrificing the energy and excitement that we must bring to our second century,” he said. “Our foundation is strong. We have four solid pillars – National Defense, Veterans Affairs, Children & Youth and Americanism. All of these offer opportunities in which we can act Legion. All of these can and need to be used to build our foundation for the future.”