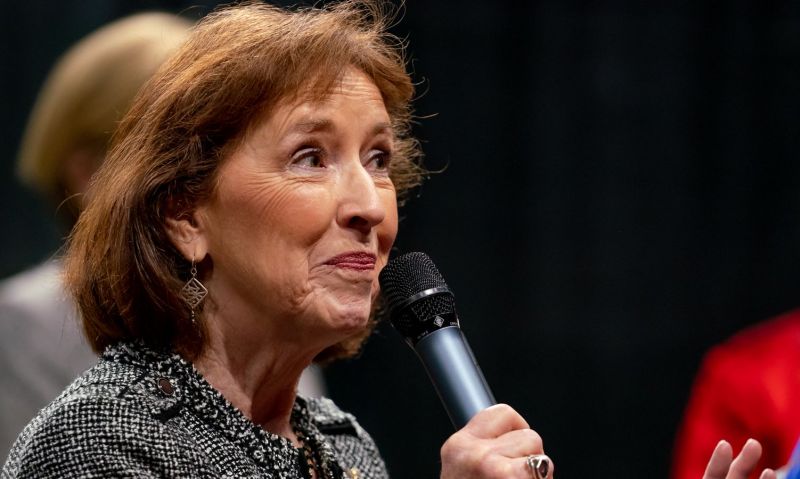 The Vietnam Women’s Memorial, located on the National Mall in Washington, D.C., is the first monument in the United States to recognize the contributions of women in the military. The creation of the bronze sculpture of three uniformed women holding a wounded soldier was the effort of Diane Carlson Evans, a member of The American Legion’s 100th Anniversary Honorary Committee and a Vietnam War combat nurse.

Her 10-year effort to bring the memorial to life was driven by “how proud I was of those women (who she served alongside) and how valuable the contribution that women in the military give to their country,” said Evans, who was one of several women veterans participating in the Courage, Commitment and Leadership Forum: Extraordinary Women of the U.S. Military, at Scope Arena in Norfolk, Va., on April 26.

“Without Diane there would be no recognition of women in the service. The memorial on the mall just speaks our story,” said retired Army Col. Margarethe Cammermeyer, another panelists on the forum.

The Courage, Commitment and Leadership Forum was part of the 23rd annual Virginia International Tattoo, a musical, song and dance event that brings together military bands and from around the world. The Tattoo’s theme this year was Courage & Commitment: A Salute to Women in the Military.

Evans was 21 when she joined the U.S. Army Nurse Corps. Her two brothers (who also served during the Vietnam War) and father didn’t want her to, “but I did it anyway. I think that just shows there’s something inside of us, whatever that reason is. We feel we need to step up and do our part, and I think women have been doing that since the birth of our nation. The way I look at it, especially back then and hopefully not so much today for you young women currently serving, but women went not where we were wanted. We went where we were needed.”

Evans reminded the audience of young recruits and women veterans, including American Legion Past National Commander Denise Rohan, that women have been stepping up to serve since the Revolutionary and Civil War.

Retired U.S. Army Maj. Gen. Donna Barbisch remembers watching Walter Cronkite on the evening news in the late 60s and how he would report on American casualties from the Vietnam War. “That to me made me feel like I had to do something. And as a nurse, what higher calling could there be than to take care of our soldiers?” shared Barbisch, who was the first Army Reserve nurse to achieve the rank of major general. “Serving in war was one of the most rewarding professional times for me because I was able to help so many people in distress.”

Once the panelists shared their background and reason for joining the military, the forum was open to questions from the audience. The women were asked about female veteran issues within the military community, such as harassment.

U.S. Army Capt. Lauran Glover emphasized the need to treat the military as a profession and as with any profession, you treat your colleagues with respect.

“Let’s hold each other accountable; let’s treat each other with respect," said Glover, who joined the Army in 2011. "I don’t think it’s that hard, but I think in our history we’ve allowed and encouraged certain behaviors that have made it harder for us to come together as men and women. If you get rid of those things, it would make it a lot easier."

“We have to remember this is my comrade, who I’m going to be fighting with shoulder to shoulder.”

Glover is working on her doctorate in clinical psychology. She joined the Army because she felt in order to counsel veterans, she needed to be one. “We are 1 percent of the population, so how could a civilian truly understand what military personnel go through, so I signed up.”

Cammermeyer also emphasized the need for respect. “We have to make sure it’s a safe environment by how you respect the people with whom you work,” she said. “For you to be the young leaders of today, you will change the environment for tomorrow.”

As a young child, Rohan learned to “treat people with respect, and when you get a job do the best you can. And that will help you succeed in the future,” she shared following the forum. “We joined (the military) for a reason … you cared enough in the first place to put the uniform on and you continue to care and you continue to care for one another. It doesn’t matter if you’re male or female. We’re all in it together. I didn’t train with men, but eventually we all do serve together. We need to know that we can count on each other and we know that the respect is there.”

Other women veteran panelists shared what they had to overcome as a female in the military. Retired U.S. Marine Corps Lt. Gen. Frances Wilson, who served 37 years, was denied going to jump school when she first joined in the early 1970s because she was a female, even after over 100 jumps. In 2012, she became a member of the Department of Defense Advisory Committee on Women in the Service “to do what I could to improve our conditions,” she said.

The committee was instrumental in the opening of all combat roles to women in 2015. “Today now, and I think this is what’s critical, people are being judged on what they can do. Standards are not being lowered. If you can meet the standards, why shouldn’t you have the opportunity?” Wilson said. “Why shouldn’t have I been able to go to jump school when I was a proven entity? But because I was a woman, I was denied that opportunity, initially.”

While in the U.S. Navy, veteran Matice Wright was told she would never succeed in what she was trying to do as no African-American female had before. “All I wanted to do was fly and serve my country flying in the Navy. Please give me the opportunity to do it,” Wright said.

In 1989, Wright became the first African-American female naval flight officer. “My message to young people is that no matter what you’re pursuing, if you’re dream is to do something it doesn’t matter if no one has ever done it before," she said. "You set your sights on it, you know who you are and be true to yourself.”