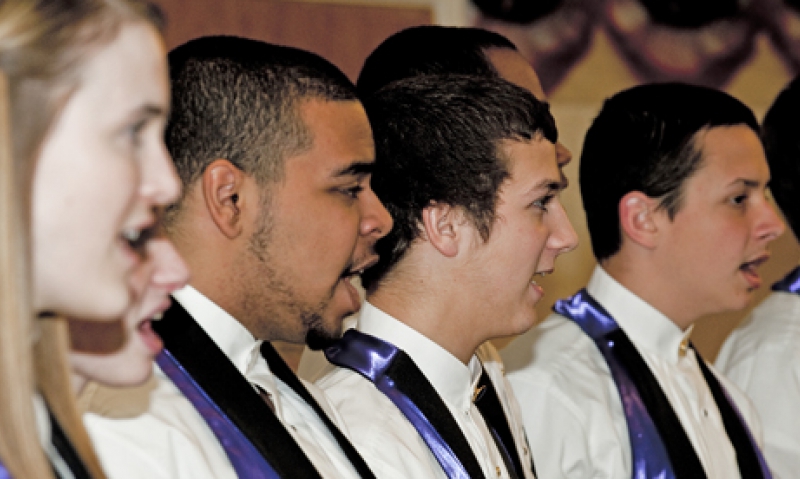 Spring break is a time when many students escape the cold by flying to a warmer destination. But for the Austintown, Ohio, Fitch Concert Choir, spring break is spent belting out Broadway tunes and patriotic lyrics to individuals often forgotten by family members and everyday people - U.S. veterans.

"So many people in VA hospitals go unseen," said Nicole Cirbus, a choir member. "It's sad to know that somebody is out there without that love, wondering if America still remembers what they have done for our freedom. I want to be that person who makes the veterans smile, who gives them happiness."

Undoubtedly, smiles, hope and happiness are what the choir has given to veterans for the past 39 years.

In 1971, two Austintown-Fitch High School colleagues - choir director Rosemarie Kascher and retired Navy Reservist Milton Kochert - wanted to show appreciation to the community for its support. As a Vietnam veteran, Kochert saw firsthand the loneliness veterans experienced in VA hospitals and wanted to change that. For this reason, the choir took its first show on the road in 1972.

Since then, the Austintown Fitch Concert Choir has been striking a joyous chord in the hearts of millions of veterans in VA hospitals from the Mississippi River to the East Coast. Each year consists of traveling to a new hospital with new faces and stories, but one thing remains the same: There's never a dry eye when the choir performs.

"One year we sang to a quadriplegic who had not shown any emotion from the time he had been in the hospital, which was over three months," said Kaye Williams, choir director for the past 20 years. "And he cried when the kids sang. So you know the music really affects the veterans and the kids."

The music performed consists of uplifting show tunes, as well as patriotic songs such as "God Bless the USA." Because of the happiness brought forth with the music, the choir is a welcoming change of entertainment for the veterans.

"While visiting a mental ward, one gentleman told me that our visit was the best thing that could have happened to them because they watch the movie ‘Grease' every night of the week, even though we happened to sing the ‘Grease' musical," said Tyler Hoffman, a choir member. "Being allowed to bring such a sense of hope and joy to these veterans is amazing."

These life-changing visits allow students to experience firsthand the joy they bring along with the stories each veteran holds. As they perform to veterans in a cafeteria or sing their way down hallways to the wards, students hear how some haven't had a visitor in six months, while others visually express missing the lives they once knew.

"There was a man in a hospice ward who was originally a radio broadcaster in California in the ‘40s before he went to war," said April Krempasky, a choir member. "He had photos of himself as a broadcaster all over his room, and it was amazing to see because you think of veterans as somebody who only fought in a war, but we have to remember that they had a life and a career previous to that."

The students do volunteer their free time to the veterans, but the yearly hospital trips come at a price. The total amount per student to cover lodging, transportation and food is $500. And while most of the money is raised through fundraisers, the 9th District American Legion posts in Ohio sponsor and support the choir's humanitarian efforts. Last year, 9th District posts presented the choir with an American Legion banner as an award for bringing hope and smiles to millions of veterans; the choir proudly hangs the banner on the steps of each VA hospital they visit. This year, the 9th District recently hosted a dinner celebration at Legion Post 151 in Conneaut, Ohio, to recognize the choir for upholding the legacy.

The celebration involved many 9th District Legionnaires, Sons of The American Legion, American Legion Auxiliary members and the Ohio Department Chaplain Ben Aycock, who all showed appreciation to the choir through words, awards and monetary donations up to $500. The choir patriotically gave back to the celebration by singing "God Bless the USA," which initiated a hand-holding bond amongst all in attendance - something the choir is fondly used to.

"When the choir goes to VA hospitals to perform, they hold hands with our veterans, smile with them and give them hugs," said Joe Rockwell from 9th District Legion Post 737 in Lake Milton, Ohio. "What that message says to our veterans is that America cares, thanks you and supports you."

As the choir continues forward with its yearly tradition, the memories created will remain with the students and the veterans.

"Visiting the veterans touches you in ways you can't explain to anybody," Cirbus said. "Veterans are constantly thanking us, when we should be the ones thanking them."