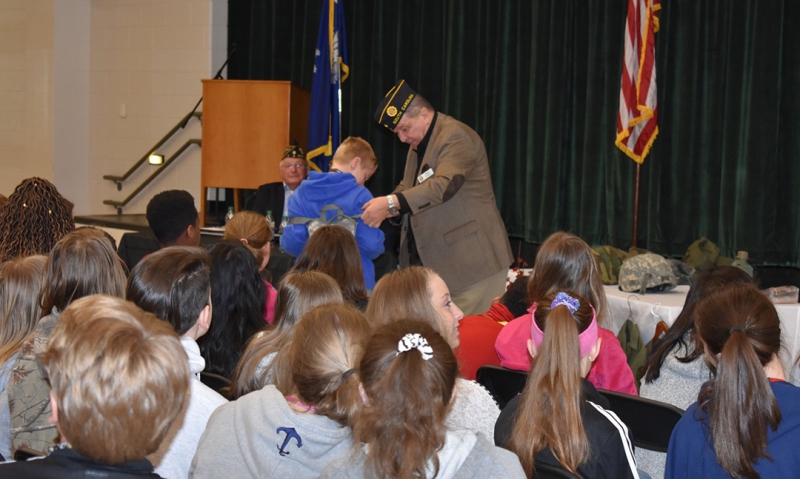 Legionnaire Charles “Chuck” Rose, a member of James F. Daniels Jr. Post 3 in Greenville, S.C., is a strong believer in the role The American Legion has in helping educate youth. It’s a source of pride at the post that the state’s first- and second-place Oratorical finishers have come from Post 3 in the past two years.

So when a local school inquired about some members of Post 3 taking part in a town hall, Rose said it was an easy decision to say “yes.”

On March 23, Rose and fellow Post 3 Legionnaires Amos Hykes and Joel Heiser took questions from a group of 240-plus seventh-grade students at nearby Ralph Chandler Middle School in Simpsonville. It was a chance for the veterans to share insight into their military careers with an eager audience ready to both ask and listen.

The event also tied into what is a goal of Rose: to raise awareness about the Legion through the post’s honor guard and involvement in other community activities. “My goal is to get into the schools on flag presentations, patriotism and that type of activity,” he said. “In a way this fit in, but I never thought about this format.”

The school’s seventh graders were studying wars over time, and Principal Jeff Jenkins said the school’s seventh-grade teachers were looking for “an opportunity beyond what was being taught in the classroom. We’re always looking for learning moments with experiences that attach to those moments.”

Sarah Evanson, the school’s instructional coach and a past American Legion Department of Florida Teacher of the Year, reached out to Post 3 to gauge its interest.

“We had multiple meetings in order to learn what each other’s expectations were for the town hall,” Jenkins said. “And we spent some time just going over how to put on the town hall.”

The students were asked to prepare questions in advance and then asked them during the town hall. “The students really honed in on what they wanted to ask,” Jenkins said. “Some of the questions were about things like ‘What was basic training like?’ and ‘How was the food?’ But one student asked about the medical treatment the soldiers would get, and one of the veterans told the story of a fellow soldier who jumped on a grenade to save his fellow soldiers and about what that soldier went through. I think the students really felt the gravity of his story.”

Jenkins could tell the veterans made an impact. “Our students stayed behind to ask more questions, and then the veterans stayed for lunch and interacted with the students,” he said. “There was a lot of buzz about this. Our students were really interested in hearing the full context of what they’re reading about in books.”

The Legionnaires brought military equipment to share with the students, dating back as far as World War I and as recently as modern-day Kevlar. They also left a final memento with the students: a few MREs for the students to sample, which they did a few days later. “There were mixed reviews from the ladies, but the guys loved the grub,” Evanson said.

Rose couldn’t help but work in a plug for the post’s Oratorical Contest during the town hall. “At the end I said, ‘Now that we’re finished it’s time for the commercial,’” he said. “And we have a museum at our post, and afterward we talked to the principal and Sarah about opening up the museum for their classes on special trips.”