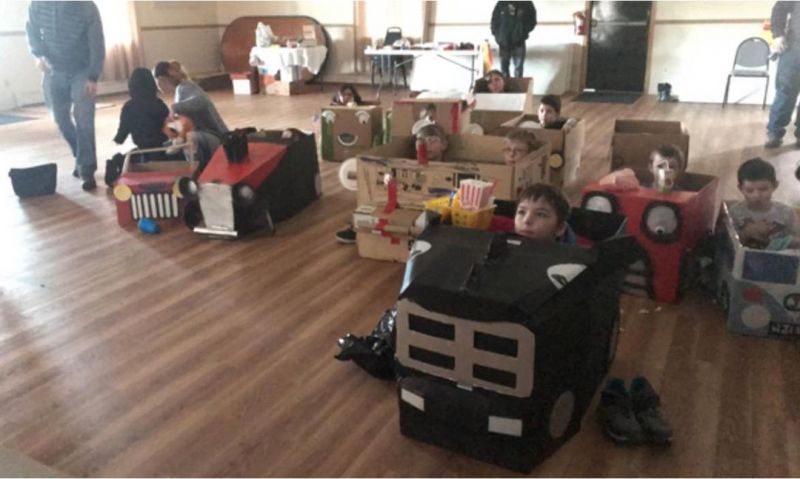 Looking for a way to provide something for the youth in Wasilla, Alaska, to do during the winter months that included interacting with their parents, Susitna Valley Auxiliary Unit 35 Historian Joy Lyons looked to the past.

On March 10, Lyons and Post 35’s American Legion Family hosted a drive-in movie night at the post for children ages 10 and under in the area. Approximately 20 children and their parents attended the event, which included snacks and a screening of the movie “Cars 3.”

Lyons, who is active with Post 35’s Legion Family Activities Committee, shared the idea there. “This was just something that I threw out a while ago, not sure what kind of response we would get,” she said. “The word got out, and there seemed to be a lot of interest. So we decided to go ahead and go with this for the children in interaction with the adults.”

Lyons said the idea behind the event involved some nostalgia. “Nowadays, I don’t think children really know what the drive-in is. How many drive-ins are left around the world, actually?” she said. “I thought it would be interesting and fun on both sides.”

Lyons created a flyer to advertise the event and also promoted it through the post’s Facebook page. The parents and children were given the option of either building a car for the child to sit in ahead of time or to arrive at the post early and construct one there. There even was a contest for the best car.

Lyons said she thought the car-building portion of the event “was a great thing for interaction because there’s other kids there, other parents there, more camaraderie. There were several people I had never seen there at the Legion, which was awesome. The parents helped make the cars (and) helped paint them. It was just great.”

Admission was $5, which included a juice box, popcorn, fruit candy and other snacks. And the reaction from the parents who attended?

“I had a lot of compliments about this, saying … ‘When’s the next one? What else can we do with our children?’” Lyons said. “We do things with our children. We have activities at Christmas. We have the Halloween party. But this was something different. So this might become something bigger that will happen again.”

Lyons praised fellow Post 35 Legion Family members Jane Larson, Kevin Lyons, Loren Estrada, Rick Jensen, Travis Rehard and Kim Jensen for their help in putting on the event. “We have a great family here at Post 35,” she said. “Now we’re thinking we need to do something for the older children. And on the Activities Committee there has been talk about wanting to do this again because the children did enjoy it so much.”