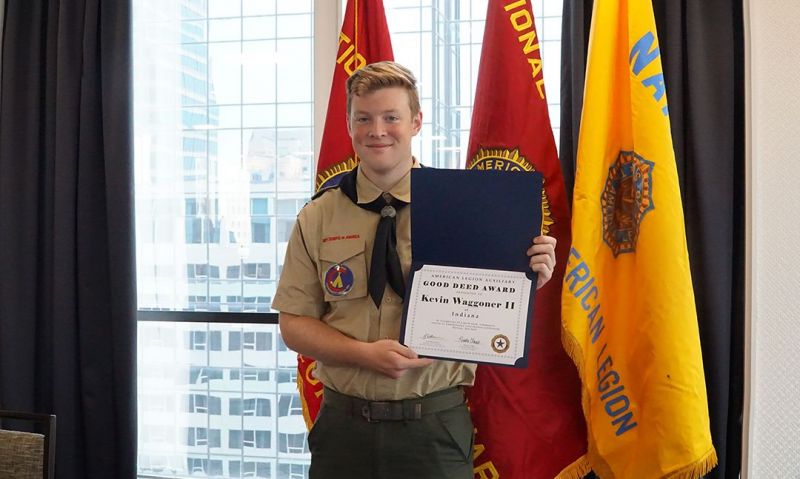 Kevin Waggoner received a Good Deed Award from the American Legion Auxiliary during The American Legion’s National Children & Youth Conference at the Sheraton Indianapolis City Centre Hotel Sept. 21. The award recognizes youth who contribute to their community through time and/or money. For Waggoner, a 17-year-old senior at Perry Meridian High School in Indianapolis, he was honored for his Eagle Scout project of converting a computer lab into a sensory room for children with special needs.

“I’d just like to thank everyone for this award; I really appreciate it,” said Waggoner to conference attendees. “I had a really good time at Boys State, and I thank (The American Legion) for putting that on.”

Scarlett, Abby and Violet had received a lot of flowers following their performances at Wayne Township Community Theater in Indianapolis. Instead of keeping them, they shared the flowers.

The sisters filled a bucket from their garage with water, placed the flowers inside, attached a note that read “Please take a flower and have a pretty day” and left the bucket on the sidewalk.

The Auxiliary’s Good Deed Award and Youth Hero Award, which recognizes someone under 18 years old who performs a heroic and physical act, “shows what great kids we have in our communities,” Williamson said.

In celebration of the Auxiliary turning 100 on Nov. 10, Williamson shared that the Auxiliary has a goal for the year of presenting 100 Youth Hero Awards and 100 Good Deed Awards. For more information about the awards, click here.