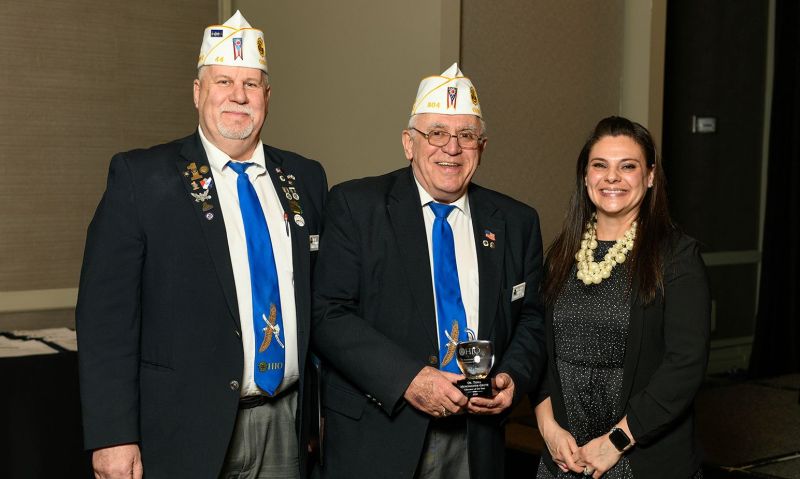 Legionnaire Jerry Nelson was in awe of the beautiful bouquet of flowers he recently received at home. The sender was expressing appreciation to Nelson and American Legion Post 681 in Lakota, Ohio, for the Department of Ohio Educator of the Year for 2020 nomination – an award Dr. Tisha Grote accepted March 13 during the department’s leadership conference in Columbus.

“The last year, 2020, in a global pandemic has been extremely challenging on all fronts,” said Grote, an AP U.S. government and politics teacher at Lakota East High School. “This nomination and award have meant a lot to me in a year that has tested my resolve. I am forever grateful to Mr. Jerry Nelson and Post 681.”

The relationship between Grote and Nelson transpired in 2007 when American Legion Post 681 was revitalized. The post wanted to be involved with the community, “We wanted to work with the Lakota School Systems to promote ourselves in the community and get everyone to know us that we’re out there,” said Nelson, the Americanism chairman at Post 681. So, he contacted Lakota East High School and found out who the AP government teacher was.

That was 14 years ago. Since then, Grote and Nelson “have formed a very good relationship. She has been indispensable for our post to accomplish the goals set forth in the Americanism pillar. So, I really wanted to honor her for the accomplishments she’s had with The American Legion and her students.”

Nelson visits Grote’s classroom four to five times throughout a school year. He has the entire class period to talk about and promote Department of Ohio programs that Post 681 supports – the Americanism and Government Test Program, Buckeye Boys State, Auxiliary Girls State, and the Oratorical Contest. He also brings another member from the post with him to speak about their military service such as Air Force nurse and Ohio Rep. Jennifer Gross.

“That’s quite a sacrifice for a teacher to give up that much time; however, it’s been very effective,” Nelson said.

The effectiveness of Nelson’s visits to Grote’s classroom have resulted in:

- Six students being winners of the Department of Ohio’s Americanism and Government Test Program for the past six years. About 60,000 students in grades 10-12 statewide take the Americanism and Government Test Program every year; the 18 winners chosen each year receive a five-day, all expenses paid trip to Gettysburg, Pa., and Washington, D.C., with American Legion Department of Ohio leadership and Auxiliary leadership.

“I think this is remarkable. Absolutely remarkable,” Nelson said. “This is a testament to how well she teaches. She goes out of her way to teach these kids Americanism and government.”

Nelson believes Grote’s “drive for Americanism comes from her father,” a point man in the Vietnam War.

“Growing up, I do not remember my father ever speaking much of his time in this war,” Grote said. “It was not until I became a government teacher in the 2001-2002 school year that I invited my dad to come into my classroom and speak on Veterans Day. The stories he told were the first time I was hearing them. He brought in photos and a few other items he was allowed to keep from his time serving. I had never seen them before. He continued to come into my classroom on Veterans Day until 2012. At that time, we recognized that he was showing signs of dementia.

“It is important to me and my students that veterans have their stories heard. They have much to teach students of U.S. history, world history and U.S. government. I have enjoyed creating a space in my classroom for those stories to be heard.”

Students get to spend time with Post 681 members outside of the classroom as well. The post has a dinner celebration to honor the students they sponsored to Boys and Girls State, who participated in the oratorical contest, and who won the Americanism and Government Test. Grote and the parents of the students also attend.

“It is a wonderful opportunity for my students and their family members to meet all the members of the post,” Grote said.

It is only during this celebration dinner that Nelson brings a special family memento – his father’s World War II pocket Bible. During his fight in the Battle of the Bulge, Nelson’s father was hit with shrapnel that struck his Bible but stopped before piercing through it. That Bible was in his field jacket pocket – “that’s over his heart,” said Nelson, who joined The American Legion in effort to support his son’s military service in the Afghanistan war. “That’s the Bible we place on the POW/MIA table.

Grote is the first teacher that Post 681 nominated for Educator of the Year.

“Dr. Grote has certainly aided our post, her students, the Lakota School System, the community and nation,” Nelsons said. “She’s helped us promote ourselves in the community, and the community knows The American Legion post to a good degree through her efforts. We hold her in high regards.”