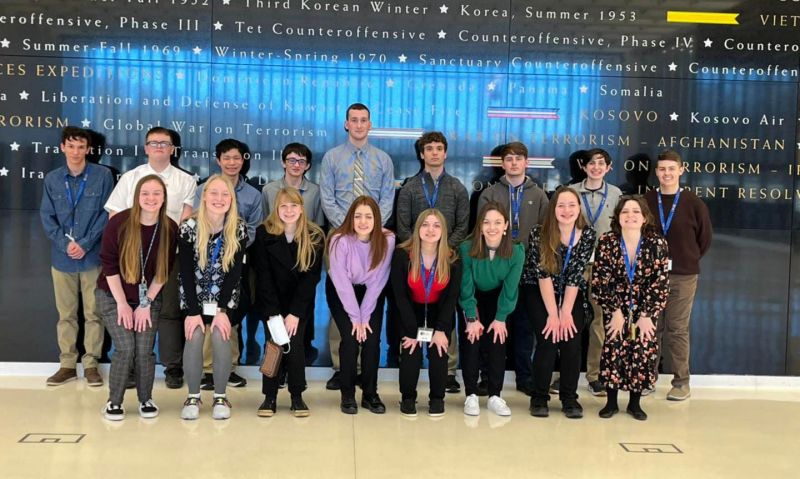 Since 1936, the Department of Ohio American Legion has taken a group of high school students to the nation’s capital for an opportunity to visit some of the nation’s finest museums and memorials.

But for the students, the Americanism and Government Trip is much more than a sight-seeing visit. It’s a chance to provide potential opportunities for the participants.

“I think, specifically this age, they kind of have an idea of what they want to do when they grow up,” said Department Americanism and Children & Youth Coordinator Christie White. “If they want to (go into some form government), going on the trip is eye-opening for them. We try to show them, ‘if this is what you want to do, this is how it’s going to be.’ And we take the best of the best. If you’re not interested in this subject, there’s no point going on this trip.”

Students are chosen for the trip based upon their performance on the department’s Americanism and Government (A&G) Test, which are administered through local American Legion posts. It’s a 50-question, multiple choice and true-false test that also includes an essay. The top three male and three female students from grades 10, 11 and 12 are selected annually. More than 60,000 students took the test this academic year.

With Department of Ohio American Legion Family leadership serving as chaperones, the bus departed Ohio on Monday, Feb. 28, with a stop at Gettysburg along the way. The students spend the next four nights and three days in and around the Washington, D.C., area before the return trip home that includes a stop at the Flight 93 National Memorial in Pennsylvania.

During the course of the week the students are able to visit such sites as the Lincoln and Jefferson Memorials, Vietnam Veterans Memorial, United States Holocaust Memorial Museum, Kennedy Center, the State Department and the White House.

And then there’s what White said is the highlight of every trip: a visit to Arlington National Cemetery.

“Our big thing we do is we place a wreath at the Tomb of the Unknown Soldier,” White said. “We’ve done it every single year since 1936 with a group of students. That was even before the tomb was guarded 24/7. So when we plan the trip, we always plan laying the wreath first and plan everything else around it.

“So, in 2021 it was a little hectic because the Tomb was actually closed. Arlington was open, but the Tomb was closed. We still wanted to have the tradition of laying a wreath in Arlington, even if it wasn’t at the Tomb. We actually selected a Medal of Honor recipient from Ohio (Forrest E. Everhart) and placed a wreath on his tombstone. We wanted to make sure that if we couldn’t lay it at the Tomb, we were going to find an Ohio (veteran) and at least have the group pay our respects to him.” (Click here to see this year’s wreath laying at the Tomb of the Unknown Soldier)

Being able to coordinate the trip and take part in it – and watching the students experience it – has given White what she feels is “the best job in the world. Even if there’s students that have been on (a similar trip) before, they went in eighth grade. You’re hanging out with everyone in your class and having fun, not necessarily taking it as seriously. So taking them … they light up. And I think they underestimate it. You can read about it in history books and watch programs on TV, but until you see it live in person it’s completely different.

“You can tell the second they step off the bus at a certain memorial, or if we’re going to meet a congressman, their eyes just light up. And they don’t want to get back on the bus. When I went to drop them off (after the trip) and the chaperones got off the bus, the parents were waiting in the parking lot. And it was almost like (the students) had a sit-in. They didn’t want to get off the bus.”

Any American Legion departments wishing to conduct a similar program as Ohio’s Americanism and Government Trip are invited to contact White via email.