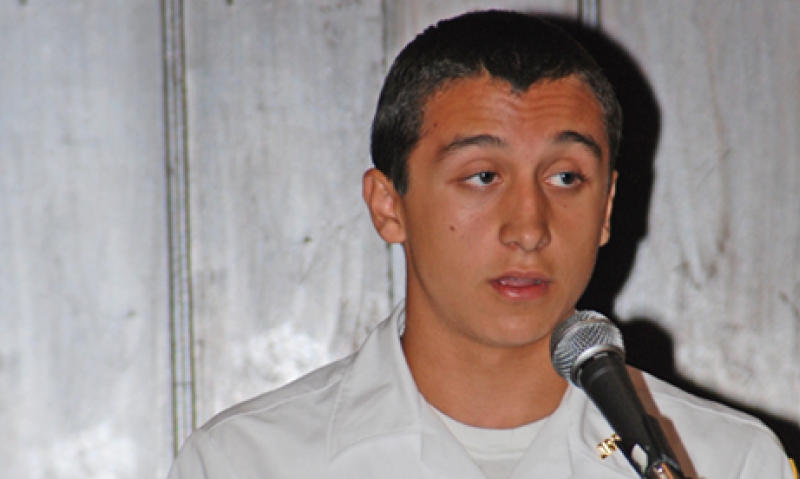 Marcus Guerra Jr. is one of 88,000 youths involved in Operation: Military Kids.

Marcus Guerra Jr. is like most normal 15-year-olds. He rides the bus to school and plays football. But Guerra also volunteers in the Army’s Operation: Military Kids Speak Out for Military Kids program. The son of a U.S. Army Reservist, Guerra mentors older military children because he knows firsthand the difficulties those children face.

“As a child of a reservist, you have to learn to live two lives. One (is) your normal, everyday, civilian life,” Guerra told attendees at The American Legion’s National Children & Youth Conference in September. “My military life is my second life. It becomes most noticeable when my father goes away to drill for a few weeks or months, or when there is news of individual soldiers deploying from his unit. Such news brings all of the uncertainties to the forefront: Like will he deploy himself? For how long will he be gone? Where will he deploy to?

“If or when he deploys, I know that I will have to take over some responsibilities that my father holds now. And my sisters will have to help out with some of my chores. But, in any case, this forces me to be a leader. I find this to be a good thing. But sometimes the pressure does build up.”

Operation: Military Kids is the U.S. Army’s collaborative effort with communities to support the children and youth impacted by deployment. The initiative, launched in April 2005, has assisted 88,000 military youth and provided information to more than 21,000 community members across the United States.

Guerra said being involved in Operation: Military Kids activities, like the program’s summer camps, has greatly affected his life.

“The camps made me feel prideful and confident. They have opened up greater opportunities for me,” he said. “But most importantly, they connected me to other kids like me who are experiencing the same anxieties, fears and uncertainties. These camps are very important because it allows kids to come together and share their fears and anxieties and even their pride in their family members with others like them. These camps give kids a safe and understanding place to be themselves while providing them with a break from their daily lives and responsibilities.”

Resolution 30, passed during 2005’s Spring National Executive Committee Meetings, urges Legion posts and departments to “work with and support their local Operation: Military Kids efforts to contribute to the well being of children of military personnel.”

Guerra said the camps present a perfect opportunity for Legionnaires to follow through on Resolution 30.

“It’s important for The American Legion to get involved with these types of camps,” he said. “Some things (Legionnaires) can do are visit the camps and discuss what the Legion is all about. Even just telling the children about how they can offer their families help when they are in need would be useful. While we are only children, we know when things aren’t right. We notice when the lawn isn’t being mowed. We know when the electric bill or gas bill or phone bill isn’t getting paid. We know when mom or dad is stressed about suddenly being a single parent. But even if the American Legion could help with small things that make our lives less stressful, that would have such a big impact on us and Speak Out for Military Kids.”

Guerra also suggested Legionnaires share volunteer opportunities with OMK camp participants. “At a couple of Operation Military Kids events that I went to, we made fleece blankets for the VA hospitals,” Guerra said. “It gave me a sense of achievement. I’m sure sending gifts overseas would also.”

Guerra said waiting for his father’s deployment is difficult, but it’s a sacrifice he’s willing to make.

“Although I haven’t been through deployment yet, he has gone away for training for eight months and has been separated from us multiple times for days or weeks at a time,” he said. “It isn’t the same thing (as a deployment), but the feelings are equal. I still felt the fact that he wasn’t there all the time and still felt that I needed to help out in some way. I am proud that my dad is going to deploy soon. He loves the Army and loves to serve his county. I am a little worried, but if he can make the sacrifice, I can too.”