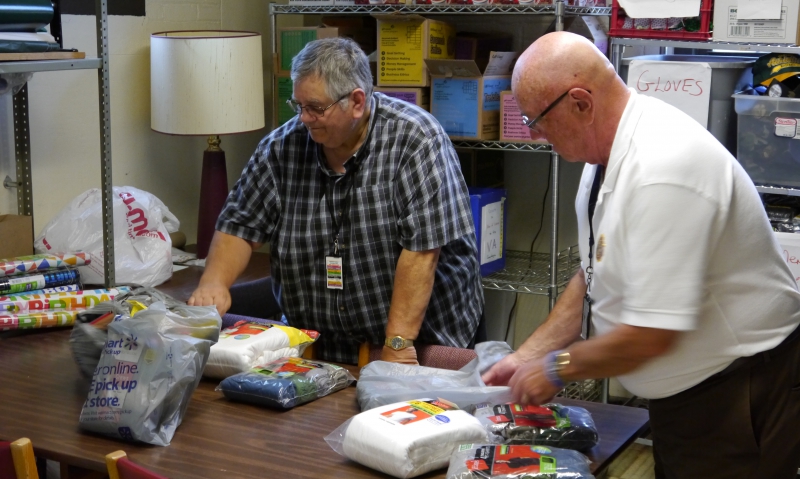 Gabe Cinquegrana, left, is the 2016 Sons of The American Legion Charles B. Rigsby Volunteer of the Year.

The Sons of The American Legion Charles B. Rigsby Volunteer of the Year Award is awarded annually to an SAL member who conducts volunteer work on behalf of veterans. The 2016 award was given to Gabe Cinquegrana, a 10-year member of Squadron 256 in Canandaigua, N.Y. Cinquegrana volunteers at the Canandaigua VA Medical Center.

Cinquegrana first learned of the Sons when he helped a friend find a local American Legion post to transfer membership. Once he became an SAL member, he got involved with events and leadership positions and that's when he heard about opportunities to volunteer at the local VA hospital. It wasn’t long before he was helping out regularly at the hospital, first as a wheelchair escort, then in the Human Resources office, and now he spends at least two days (and some nights and weekends since he has a key) helping in the public affairs voluntary service office. He’s also the Sons’ VAVS hospital representative.

“I’m not sure I inspire anybody, but I can tell you what motivates me... my father because I never got to talk to him about his military service," Cinquegrana said.

Those who work with Cinquegrana offer praise.

“I wasn’t surprised he won the award,” said Emily DiSalvo, a social worker at the VA. “He’s been so helpful - my knight in shining armor. Anything I need he’s just a phone call or email away.”

Now retired, Cinquegrana has held several careers in life. Most required the kind of business sense and organizational skills he now lends to the VA. He records all donations of cash or goods, tracks hours for as many as 600 volunteers, and has developed computerized reports used to notify groups about their contributions of time and money. He organizes two storerooms and makes sure patients get something they want on their birthdays. And he helps with bingo in the dementia ward.

"I probably should’ve been a promoter,” Cinquegrana said. “I’m always coming up with new things to try, finding the money, coordinating it, and finding people to run it.”

Volunteering at the VA takes up a lot of Cinquegrana’s time, but he also works to fundraise for multiple sclerosis, which his wife suffers from. He also is the Detachment of New York public relations chairman, and he handles the detachment's newsletter, Website and Facebook page.

He's "a very outgoing guy; always stepping up to do what nobody else wants to do,” said American Legion Post 256 Commander Don Grundke.