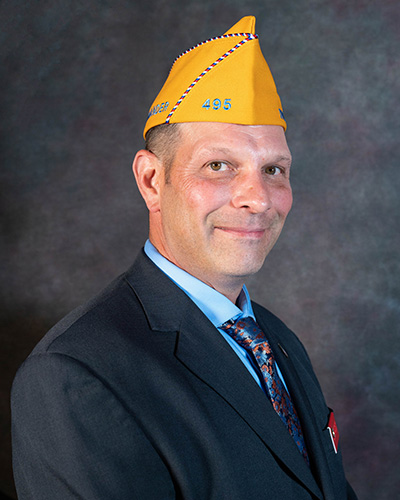 Chris has held most offices at the Squadron, District and Detachment level, becoming Detachment Commander of Indiana in 2015. On the National level Chris served as Chairman of the Child Welfare Foundation Committee for 2 years and Chairman of the Veterans Employment and Education Commission for 1 year.

Chris graduated from Arsenal Technical High School in 1993. He graduated Horizon School of Evangelism in 1995. Chris earned a 2 year degree from Ivy Tech College through the Sheet Metal Workers Local 20 Apprenticeship and is also a graduate from the National Management Institute.

Chris is a Journeyman sheet metal worker; he currently is a Mechanical Team Lead and Certified Welding Inspector with Altec Industries for the last 11 years.

Chris has been married to his wonderful wife and partner Veronica Carlton for 14 years. Veronica is a 35 year member of the American Legion Auxiliary at Leo F. Welch Jr. Unit #495. Veronica works as a BSN RN at the Richard L. Roudebush VA Hospital in Indianapolis, IN.

Chris and Veronica are dedicated to the values and principles of the American Legion Family and are always willing to volunteer their time to their post, and for veterans everywhere.