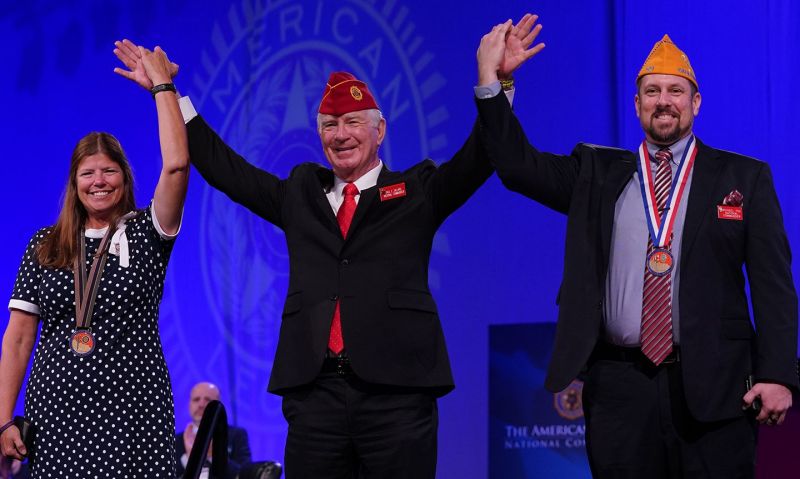 American Legion National Commander Paul E. Dillard has a goal of raising $2 million for the Veterans & Children Foundation (VCF) this year. A $500,000 donation from the Sons of The American Legion reserve fund, announced at the SAL National Executive Committee fall meeting, will help achieve that goal.

“Before the national convention in Phoenix in one of many phone calls with (Commander Dillard), I told him that the SAL will do everything that they could to take care of 25 percent of his goal to raise the $2 million,” said SAL National Commander Michael Fox. “When the opportunity came up, I discussed this donation with the (SAL Veterans Affairs & Rehabilitation) Commission and left the decision up to them on where to place the money.

“Thankfully, the VA&R Commission and the entire NEC agreed that $500,000 to VCF was an excellent choice.”

The VCF provides vital support for military and veteran parents in unexpected financial crises, and support for American Legion service officers in their efforts to obtain care and earned benefits and opportunities for disabled veterans and their families.

Fox said the donation to VCF reflects the SAL’s mission to support The American Legion.

“We are here to help in any way possible to see that The American Legion continues to thrive,” Fox said.

Another sizable donation announced at the fall meeting in Indianapolis in early October was a $130,000 donation to American Legion Baseball.

“In talking to the national treasurer, baseball was the one program that was looking to expand its efforts and had a shortfall to do so,” Fox said. He said the donation from the SAL’s reserve fund could be use to promote the program through advertisements.

And, Fox added, American Legion Baseball is one of his favorite Americanism programs.

“I have been part of the California state tournament for 39 years and had the opportunity to go to the (American Legion) World Series this last August for the first time. What an amazing place for our youth to play some baseball,” he said.

With the SAL celebrating its 90th anniversary next year, Fox has a goal tied to that milestone.

“During the pandemic, on all of the SAL Consolidated Squadron Reports (CSR) that were turned in, we as an organization put together over $55 million to support the programs of The American Legion,” he said. “I’m hoping that, coming off of all the closures, we as an organization can do $90 million this year for our 90th anniversary — a task that can be accomplished if we get 50 percent of CSR’s turned in.”