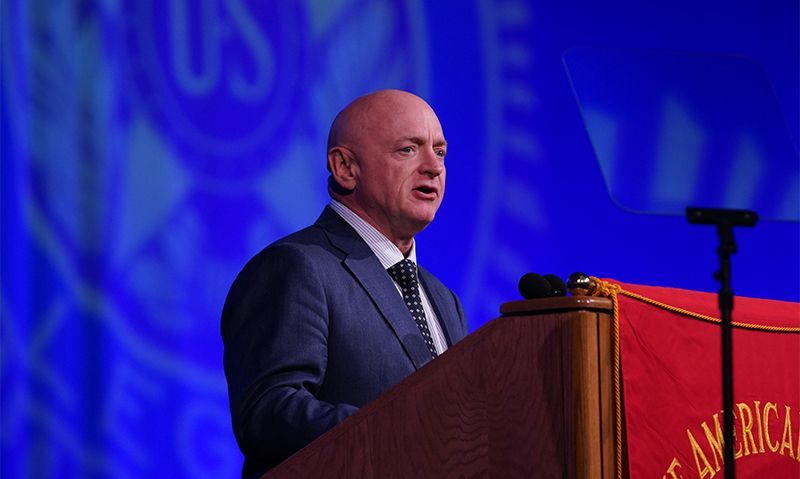 Speaking from ground zero of a 2014 scandal where misinformation and false appointment reports were connected to the deaths of 40 veterans trying to get VA medical care, U.S. Sen. Mark Kelly, D-Ariz., reported to the 102nd American Legion National Convention in Phoenix that legislative progress is being made to improve accuracy and transparency so veterans “can make informed decisions about their health care.

“Here in Phoenix, veterans know what it means when VA doesn’t keep its promise,” Kelly told thousands of American Legion Family members gathered at the Phoenix Convention Center, referring to the scandal that led The American Legion to successfully call for the resignations of top VA officials. “We know what that’s like.”

The measure would also require VA to annually audit public data “to ensure that it is both accurate and complete. That means improving transparency and giving veterans – veterans service organizations like yours – the tools to better help veterans get the care that they need, the care that they have earned.

“Together with my Senate colleagues, I’m working on cutting through red tape and making sure that our veterans get the care they need without unnecessary delays or hardship,” the former Desert Storm Navy captain and Space Shuttle astronaut said.

Kelly also used his platform at the convention to remember and honor the 11 Marines, Navy corpsman and Army soldier who were killed earlier this month protecting the airport in Kabul, Afghanistan, as refugees were evacuating the country, now under Taliban control. “Today, we think of their families and loved ones. We remember them and reflect on their lives, their service and their love of country.”

He also lauded U.S. military operations that evacuated some 120,000 Afghan refugees and others who assisted American forces in the war there. “No one but the United States military could have pulled that off. No one. I’m so grateful for their professionalism and courage in the face of constant threats.”

In context of the U.S. withdrawal from Afghanistan, Kelly said he has urged VA to conduct “more pro-active engagement with post-9/11 veterans during what is such a difficult time for many right now, with what has happened over the last couple of weeks.”

Also co-sponsored by Kelly is the Brandon Act, a June-introduced bill that would make it easier for U.S. military personnel to seek confidential mental health assistance without fear of retaliation or jeopardizing their careers.

Kelly also spoke of The American Legion’s place in society and that the 1.7-million member organization “is as far-reaching as our military – the positive impact of your work is admirable, whether it’s assisting veterans with their benefits, helping veterans and their families explore career options, providing family and community support, or offering opportunities for homeless veterans, The American Legion ensures that ‘Veterans Strengthening America’ is more than just a motto. It’s a practice, a practice ingrained in American values.

“Organizations like The American Legion inspire and inform my service. Together – working together – we can hold VA accountable to provide world-class care, cut through unnecessary bureaucracy and offer educational, financial and career support to those who gave so much in service to our nation. These are not Democrat or Republican issues. These are American issues.”