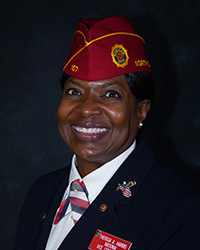 Patricia A. Harris is a member of American Legion Post 157 in Raleigh, N.C., a Legion Riders Chapter 116 member and a member of the Auxiliary. She is a retired Gulf War veteran of the U.S. Army and Army Reserves. A 2007 National Legion College graduate, Harris has served as the Department of North Carolina commander and Alternate National Executive Committeeman. Harris graduated with honors from Dudley's Cosmetology University in Kernersville, N.C., and was appointed by her state's governor to the Military Affairs Commission. From 1996 to 2009, she owned and operated the Rochester Heights Beauty Shop in Raleigh. She also founded and served as executive director of a nonprofit advocacy organization for women veterans and military for homelessness, domestic violence / sexual assault, empowerment, and employment. She has served on committees and commissions advocating for victims of crime and is passionate about ending domestic violence.

Harris, the daughter of a World War II veteran and Legionnaire, has two children and three grandchildren. 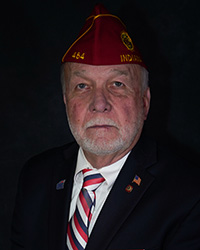 Kenneth C. Hylton is a life member of American Legion St. Joseph Post 464 in St. Leon, Ind. Hylton served in the U.S. Army (1970-73). He served with the 301st Army Security Agency Battalion, attached to the 82nd Airborne Division, Fort Bragg, N.C., and later transferred to the 4th Infantry Division at Fort Carson, Colo. After military service, Hylton worked for the U.S. Postal Service from 1973 to 2006. He served as commander of the Department of Indiana in 2014, and as department vice commander in 2008. He was appointed as Indiana Commissioner of Veterans Affairs by then Gov. Mike Pence, representing The American Legion for five years.

Hylton served as county veterans service officer for Ripley County, Ind., since 2007, raising awareness of veteran services in local areas. He is nationally accredited through The American Legion. He is a dual member of the Sons of The American Legion Squadron 464.

Hyton and his wife Carol have three children, seven grandchildren and five great-grandchidren. 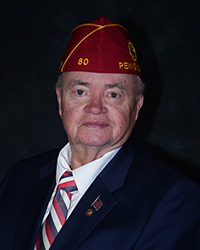 Paul M. Kennedy is a life member of American Legion Post 80 in Pittsburgh who has held every office in his post. He also served as the 32nd District commander, department western vice commander (2013-2014), department membership chairman (2015-2017), Pennsylvania department commander (2017-2018) and alternate NEC member (2018-2022). Kennedy joined the U.S. Army in August 1968 and retired as a chief warrant officer-4 in September 2008. His awards include the Legion of Merit, Bronze Star, Joint Task Force Award with V Device, Bronze Order of Mercury, and Combat Rifle Governors Twenty Badge. He also served on the PEMA Network Commission.

Kennedy and his wife Mary have three children, four grandchildren and one great-grandchild. 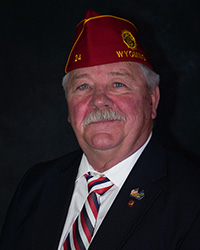 Douglas R. Uhrig is a Paid Up for Life member of American Legion Archie Hay Post 24 in Rock Springs, Wyo. Uhrig served in the U.S. Army (1971-74) and National Guard (1976-80). Uhrig has served as post, district, and department commander, and was named Wyoming's 2017 Legionnaire of the Year. He also served 11 years on the department Executive Committee, seven years on the Finance Committee, and chaired the Americanism and Boy Scout Committees. He also served as director of Wyoming Boys State, a member of the high school rodeo host committee. Nationally, Uhrig served on the Americanism Commission, Eagle Scout of the Year Selection Committee, National Convention Committee for Constitutional Amendments, Americanism, Credentials & Rules, National Defense, and has been Wyoming's alternate National Executive Committeeman and the National Executive Committeeman (2020-21).  Uhrig received a governor's appointment to the Wyoming Veterans Commission in 2013 and served until 2019.

Uhrig has worked in an underground gold mine, a surface coal mine and in a power plant. He and his wife Sharon have four children and eight grandchildren. 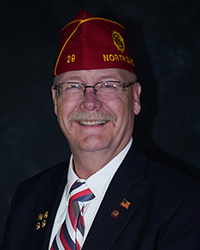 Glenn Wahus is a member of American Legion Carl E Rogen Post 29 in Watford City, N.D., and is a U.S. Navy veteran (1983-87). Wahus served as Department of North Dakota commander (2018-2019), and has served on several post, department and national committees, including the National Veterans Affairs & Rehabilitation Commission (2015-2022).   Most recently he has served as the North Dakota Veterans Affairs & Rehabilitation chairman. He was instrumental in bringing back the "courage carries on" suicide awareness and prevention program to veterans and youth in North Dakota. Wahus was picked by Governor Doug Burgum to serve on North Dakota's Administrative Committee on Veterans Affairs.

Wahus and his wife Tina have two sons. He is retired from the oil industry.