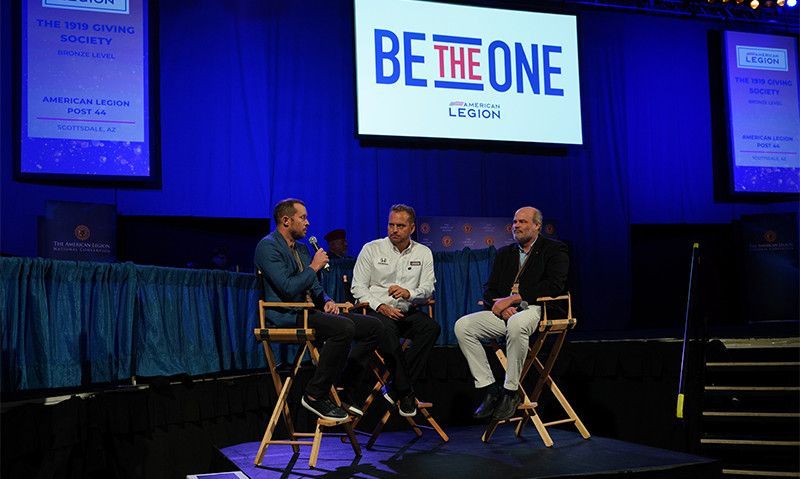 However, The American Legion is focusing on a single number — one. A new campaign, called “Be the One,” aims to change the conversation, reduce the stigma of asking for help with mental health and empower everyone to help save the life of one veteran.

During The American Legion’s 103rd national convention on Aug. 31, National Commander Paul E. Dillard welcomed a special panel on stage to discuss the issue, the Legion’s involvement and more.

“Nothing is more important to The American Legion than preventing veteran suicide,” Dillard said. “We are not only to ‘Be the One,’ but it is the one — the number one issue for us. I am excited about this next panel because this is a discussion that we need to have. We need to hear ideas and we need to always listen.”

“This is one of the greatest crises facing our military community. And it’s amazing what the Legion is doing with respect to Be the One,” said Hoover, who serves on the board of Irreverent Warriors, a nonprofit dedicated to veteran suicide prevention.

• Dr. Thomas Joiner, director of the Florida State University Psychology Clinic. He has researched the topic for the Laboratory for the Study and Prevention of Suicide-Related Conditions and Behavior at FSU. Joiner said the issue is deeply personal to him. “It runs in my family,” he said, noting he lost his father to suicide. “He was a veteran, having served as a Marine. There have been other deaths too, so it’s profoundly personal to me.”

• Dave Berkenfield, an American Legion member, retired Navy SEAL and Chip Ganassi Racing team manager for the Extreme E program. “What we’re trying to accomplish here is to change the dialogue,” said Berkenfield, whose story will be shared in the October issue of American Legion Magazine. “Whatever we can do, whatever I can do, I am happy to do it.”

During the panel discussion, Joiner said many of the patients he sees are suicidal yet there is hope.

“There are resources and ways that we can turn this tragic phenomenon around,” he said. Among them:

• Talk with your primary care physician. “They see a lot of this and they know how to manage it and know what to do.”

• “If you are a religious person, see your clergy person. They also see a lot of this and know what to do.”

Hoover emphasized the importance of communicating. “Social connections save lives and that is one of the extraordinary things about the Legion and this initiative,” he said.

“If we save one life, we have won,” Berkenfield said. “And let’s be OK with that.”

And sometimes, “we just need to Be the One for ourselves,” Joiner said. “You’re a human. You have inherent worth, dignity and deserve to be rescued, too.”

Berkenfield recalled a phrase, “What level are you willing to participate,” coined by a former SEAL teammate.

“It was how we lived our life,” he explained. “We need to participate at the highest level. Everyone in this room is somehow associated with the service. I would ask you now as a veteran, as a member of The American Legion, as part of this Be the One campaign at what level are you willing to participate? Each one of you has that ability to ‘Be the One.’ Let’s start it right here.”

Berkenfield’s story is part of a special series on “Be the One,” which began in the September issue of the magazine. Additionally, The American Legion Tango Alpha Lima podcast will feature a guest discussing the suicide awareness and prevention issue each week during the month of September. The episodes will be available each Tuesday morning at the podcast web page, as well as podcast-hosting sites.

Save
Tags: National Convention, Be the One