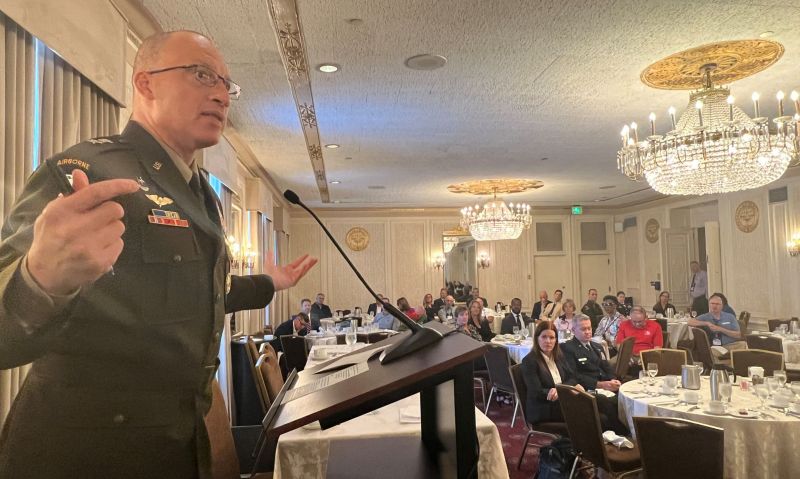 Maj. Gen. Johnny Davis, who has command over the Army’s cadet program and Fort Knox – both – has seen the best of the best. A fit and athletic career soldier who has deployed to Iraq and Afghanistan, Davis challenged ROTC cadets when they came in for advance-camp training last summer: “We were going to do a mile, and I said we would do a release run, about two miles. So, I said, ‘OK, I am 54, and if I beat any one of you, you’re going to owe me 50,000 push-ups.’ They were like, ‘Oh, it’s on.’”

The first mile went pretty well for the commanding officer, he explained in remarks at The American Legion’s National Higher Education & Credentialing Summit Wednesday in Milwaukee.

But by the third mile, he admitted, “I had cadets lap me. I felt so bad that I just stopped and looked at them. That just tells you the quality of these men and women out there. Seeing these men and women this summer, they crushed it. They are the top .01% of this nation. They are going to join our force and lead our nation into the future.”

The flipside to that statistic, he explained, is that those cadets are in a very narrow minority at a time when only about 23% who try to enlist for military service actually qualify. Today’s recruiting challenge “is real,” he said. “If the mission is 60,000, we may be at about 45,000. That’s about 15,000 short. That’s a division’s worth of men and women, so we’ve really got to look at this.”

The COVID-19 pandemic over the last two years restricted access for military recruiters to meet with interested young people, families and counselors at schools. “Now, we are starting to see that impact,” Davis explained.

On top of that comes the fact that “about eight out of 10 – if you really push the numbers – are not qualified to serve. That percent is going down every year. You all need to know that – and why. There’s medical, drugs, academics, conduct, obesity … you can go down the line.” He noted that he once read that President John F. Kennedy called it “a national crisis” when the percentage who qualified for military service dropped below 50%. “Now, we’re at 23%.”

A native of Milwaukee, host city of the 103rd American Legion National Convention, Maj. Gen. Davis went through ROTC on his way to a career of more than 30 years in the Army. Now, as leader of Army ROTC programs nationwide, he works with more than 1,000 universities, 274 host programs and helps develop 27,000 cadets. “This year alone, we will commission 6,180 second lieutenants,” he said.

He explained that the future officers are running in the high 90s in terms of scores in medical testing, marksmanship and land navigation. “Remember, these are 22-year-olds who have just some weekend training in ROTC, and they came to Fort Knox and they crushed it. One out of five scored a 550 or higher on the Army Combat Fitness Test, out of a total of 600.”

Davis also spoke of Junior ROTC and its effect on high school students. He said JROTC students have a 3.5% higher attendance rate, 9% better graduation rate and 11% greater grade point average than other students their age. “The heaviest focus is on civics, then leadership, then teamwork, then all the things to provide confidence. Life is going to happen. We want to help life happen in a favorable way.”

Across the country, some 1,700 JROTC programs serve about 270,000 cadets. “What I love about it, they are led by almost 4,000 Soldiers for Life – retired Army service men and women who are giving back. Wherever they are, they are making differences.”

Now, with recruitment and qualifying both heading in the wrong direction, the major general is calling on veterans to share their military stories with others, especially young people who may not understand the opportunities of service and take their potential elsewhere.  “We have 23% that qualify, and everybody wants that 23%. We’re in this war for talent. I ask your help to tell (young people) the power of service. It opens up so many doors.”

Propensity to serve, he added, is a bigger issue today than it was when veterans lived on every block.

“That’s not the case anymore. It’s about 1%. That’s something that we need to be very aware of.” He explained that he has heard teens say they thought they could not have a pet in the Army, or even get married, and that’s simply a lack of understanding that could be rectified by communication between veterans and potential recruits.

“I need you to go on the offensive and share your service story. National service is powerful. We need to get the word out and share, at the local level, the power of service.”