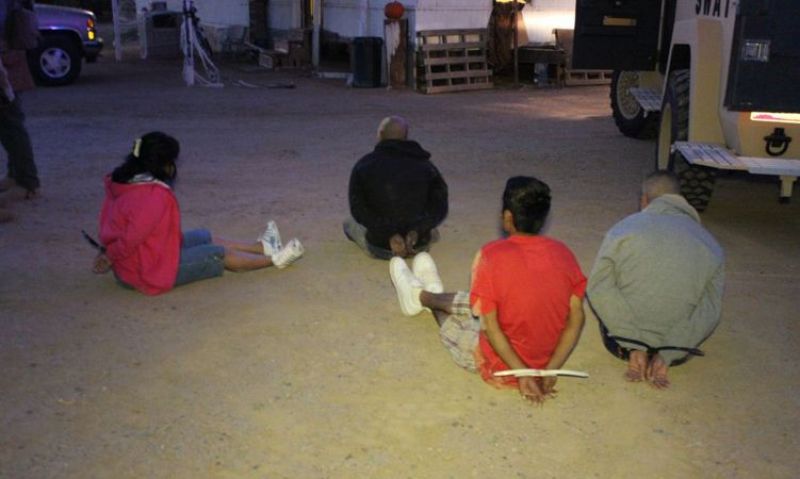 The slaughter of nine unarmed U.S. citizens – three women and six children – in Mexico’s Sonora region at the hands of a Mexican drug cartel has shocked the American people, served as a reminder of the barbarity and lawlessness on our southern border, and even raised the possibility of U.S. military intervention.

In a phone call with Mexican President Andrés Manuel López-Obrador after the massacre, President Trump proposed a joint effort to “wage war on the drug cartels and wipe them off the face of the earth.”

Before scoffing at that prospect, know that America has arguably gone to war for less. Thirty years ago this month, President George H.W. Bush ordered U.S. troops into action in Panama after an unarmed American serviceman was killed, two servicemen were injured, and an American woman was threatened with sexual assault.

“That was enough,” Bush sternly declared as he launched Operation Just Cause, adding, “I have no higher obligation than to safeguard the lives of American citizens.” Among other objectives, Bush explained, the operation aimed to “protect the lives of American citizens in Panama,” “defend democracy in Panama,” “combat drug trafficking” and “bring General Noriega to justice in the United States.”

The U.S. military secured all of those objectives.

If nothing else, Operation Just Cause serves as a precedent – and perhaps a template – for direct U.S. military intervention against Mexico’s drug cartels. To his credit, Trump doesn’t want such an intervention to be a unilateral affair. “If Mexico needs or requests help cleaning out these monsters,” Trump announced last month, “the United States stands ready, willing and able to get involved and do the job quickly and effectively.”

The president is not alone.

Sen. Tom Cotton, R-Ark., a member of the Senate Armed Services Committee and a combat veteran of both Afghanistan and Iraq, argues, “If the Mexican government cannot protect American citizens in Mexico, then the United States may have to take matters into our own hands.” He notes, “Our special-operations forces were able to take down al-Baghdadi in Syria a couple weeks ago ... They did it to Osama bin Laden in Pakistan eight years ago ... I have every confidence that if the president directed them to do so, they could impose a world of hurt on these cartels.”

Likewise, Democratic presidential candidate Pete Buttigieg, also an Afghanistan veteran, says he would be willing to send U.S. troops into Mexico to combat gang and drug violence, as the Sacramento Bee reports.

However, Mexico’s president is not eager to have the Green Berets, Delta Force and/or SEAL Team 6 roaming the Mexican countryside. And he has, so far, resisted Trump’s offer, promising that his government can tackle the problem on its own, while arguing, “The worst thing is war.”

Let’s leave the philosophical debate about whether some things are worse than war – and whether Mexico is already in the middle of a war – for another essay. Instead, let’s focus on the practical matter of whether Mexico’s police and security forces can handle this problem alone. If the stories and statistics oozing out of Mexico are any indication, the answer is no.

In October, as The Wall Street Journal reports, “35 Mexican police and national guard troops were forced to release the drug lord Ovidio Guzmán after they were surrounded and outgunned by cartel forces.” (Guzman is the son of notorious cartel kingpin Joaquín “El Chapo” Guzman, who is rotting away in a Colorado supermax prison.)

More than 3,500 police officers have been dismissed due to corruption, according to the State Department.

Add it all up, and Mexico has all the characteristics of a failed state. In fact, a U.S. military report warns policymakers to prepare for a worst-case scenario involving the “rapid and sudden collapse” of Mexico, adding, “an unstable Mexico could represent a homeland security problem of immense proportions to the United States.”

As in Somalia, Libya, Yemen and Pakistan – all FSI cellar-dwellers – warlords have taken over huge chunks of the country, and the central government’s writ is severely circumscribed. State Department and Defense Department guidelines list 12 of Mexico’s 31 states as no-go zones for U.S. travelers.

And as in Syria – the very definition of a failed state – Mexico’s chaos is breaching its borders. To the north, police in Arizona and Texas link shootings, homicides, even bombings to cartel foot-soldiers. To the south, cartel hitmen have slaughtered Guatemalan farmers.

Since 2007, the United States has sent $3 billion in aid to Mexico under the Mérida Initiative – what the Congressional Research Service (CRS) calls a “security and rule-of-law partnership.” Some 20,000 Mexican prosecutors, police officers and judicial officials have been trained under the Mérida Initiative. However, as the Council on Foreign Relations (CFR) reports, Lopez-Obrador has tried to redirect Mérida aid away from security and toward development.

Indeed, Lopez-Obrador has pursued a “hugs not bullets” – his actual words – peace initiative. This gentler, nonconfrontational approach to the thugs that run the cartels – and run quite a bit of Mexico, for that matter – isn’t working.

In one positive sign, Mexico City has asked the FBI for assistance in tracking down those who murdered the Americans in Sonora. Yet one wonders if law enforcement – even the FBI, the best law enforcement agency on earth – is equipped to go toe to toe with the cartel armies. As we learned in the 1990s, indictments and search warrants are not enough to defeat an army – whether it’s an army of jihadists or an army of sicarios (hitmen).

Lopez-Obrador seems to believe that his predecessors’ efforts to combat the cartels caused this problem; it merely exposed it. As the dramatic spike in mass-killings and homicides during the Lopez-Obrador administration underscores, the “hugs not bullets” experiment is both naïve and futile. The Mexican people recognize this, which explains why 85 percent of Mexicans have expressed support for using the army against the cartels and 74 percent approve of U.S. training assistance.

This is not to suggest that there’s a military answer for every problem, but rather that the cartels are a military-security problem that require a military-security solution. The State Department reports that Mexico’s cartels “increasingly employ military tactics.” The cartels deploy mortars, snipers, RPGs, bazookas, land mines, armored assault vehicles and even submarines. As the Guatemalan government observed after its troops engaged a Mexican cartel inside Guatemala, “The weapons seized .. are more than those of some army brigades.”

In short, defeating the cartel insurgency and pulling Mexico out if its slide toward failed-state status must start with security and stability, which means a) Washington must view the cartels as a national-security threat, and b) Mexico City must invest more in defense.

If bolstering the defense and security assets of those four countries – none of them sharing a border with the United States – is in the national interest (and it is), then helping Mexico defeat its narco-insurgency is as well.

A backdrop behind all of this is America’s insatiable demand for narcotics – a demand happily met by cartel suppliers – but that is another subject for another essay. Suffice it to say that both supply and demand need to be addressed, and that our role in creating a demand obliges us to help eradicate the supply and the suppliers.

As Trump and other policymakers suggest, that help may take the form of U.S. boots on the ground.

It pays to recall that from the earliest days of the republic, the United States has deployed military forces to protect America and American citizens from lawlessness on the nation’s borders. In 1816, U.S. troops entered Spanish Florida – an ungoverned region CRS describes as a haven for “raiders making forays into United States territory” – to bring order. Between 1873 and 1896, U.S. forces were dispatched to lawless areas in Mexico to pursue “thieves and other brigands.” The United States intervened in Mexico in the early 20th century, given that the Mexican government at the time was unwilling to control what was happening within its borders. Today’s Mexico may be willing, but it is clearly unable.

“Armed foreigners cannot intervene in our territory,” Lopez-Obrador declared this month. “We will not allow that.” But he may not have a choice as to whether U.S. forces deploy into his country to bring the Sonora mass-murders to justice – or to bring justice to them. We likely will only be able to surmise it after the fact – like the effects of an overnight storm – by piecing together seemingly disparate stories: a shootout here, a smoldering compound there, the fortunate coincidence of cartel thugs being in the wrong place at the wrong time, the capture and “handover” to U.S. authorities of a herd of warlords.

This may sound like the stuff of a Tom Clancy novel. But it’s worth noting that military experts generally believe El Chapo was captured in 2016 with the assistance – perhaps guidance – of U.S. special-operations units. They’ve never confirmed that. They are known as quiet professionals for a reason.