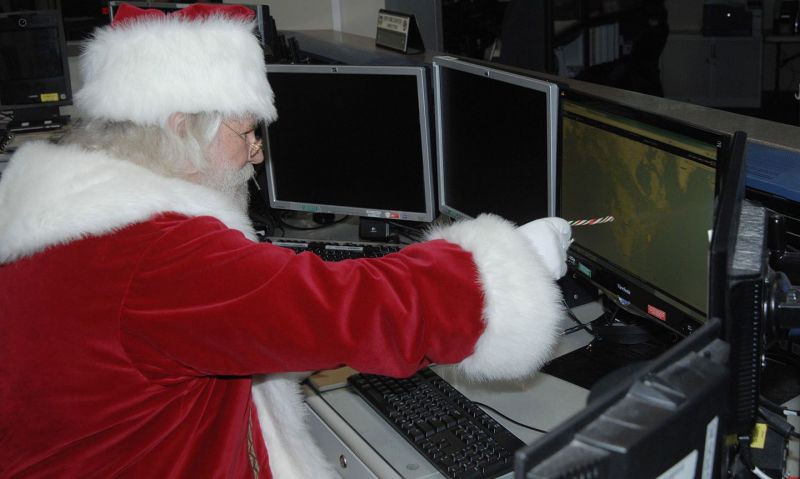 Santa Claus reviews his flight plan for his Dec. 25 trek across the globe in the North American Aerospace Defense Command and U.S. Northern Command Current Operations Center at the NORAD and USNORTHCOM headquarters at Peterson Air Force, Colo.

It’s Christmastime 1955 – among the tensest, coldest days of the Cold War.

Two years removed from a bloody stalemate on the Korean peninsula, the American people are on edge and their military is on hair-trigger alert. A fragile armistice has taken hold along the 38th Parallel, but North Korea and South Korea are far closer to war than peace.

In West Berlin, U.S. troops are literally surrounded by communist armies. Moscow has just forged the Warsaw Pact to consolidate its hold over Eastern Europe – and take aim at Western Europe.

In response to artillery attacks by the People’s Republic of China (PRC) against Taiwan, Congress has authorized the president to use military force to defend the island. President Eisenhower openly declares he’s prepared to use atomic weapons against the PRC “exactly as you would use a bullet.”

At the newly-minted Continental Air Defense Command (CONAD, forerunner to NORAD) in Colorado Springs, Colo., U.S. personnel are scanning the skies above Canada and the Arctic for inbound Soviet bombers.

In the middle of all this tension and danger, a special phone line at CONAD rings. There’s some debate as to whether it was the hotline connecting CONAD to the Pentagon or a less secure line. Either way, Air Force Col. Harry Shoup is the man charged with answering the phone and serving as America’s first line of defense. He braces for the worst. As one history of that fateful Christmas Eve recounts, “The caller might be the president or a four-star general warning of an atomic attack on the United States.”

Finally, a voice breaks the silence and tension, but it’s not what Shoup expects. “Are you really Santa Claus?” says a voice on the other end of the line.

Shoup thinks it’s a joke – and a thoughtless, reckless one at that. Looking around the command center for the guilty party, he shifts his tone from that of a ready-to-act subordinate to that of an irritated commanding officer. “Would you repeat that?” he growls.

Hearing crying on the other end of the line, Shoup realizes this is not a prank but a scared little girl calling Santa. Through no fault of her own, the child has dialed CONAD instead of the Santa Claus hotline featured in a Sears newspaper ad.

“They had one digit wrong, and it was my father’s top-secret phone number,” Shoup’s daughter, Terri Van Keuren, explains in a recent interview.

Shoup shifts his tone yet again, from that of an angry commanding officer to that of a caring father – and ultimately to that of Santa himself. “Yes, this is Santa Claus,” the father of four says. “Have you been a good little girl?”

After finishing the call, Shoup directs AT&T to transfer CONAD’s once-secret phone number to Sears. “But in the meantime,” as Van Keuren recalls in a History Channel interview, “he had to have servicemen answer the calls.”

As the Fort Collins Coloradoan reports, Shoup would even call the local radio station to report on Santa’s movement across the Christmas Eve skies of North America. “This is Col. Shoup, the commander of the Command Operation Center in Colorado Springs … We have an unidentified flying object. Why, it … it looks like a sleigh.”

Thus was born what’s surely the most enjoyable, least stressful mission at NORAD. The men and women based there are on ready alert every hour of every day – even on Christmas Eve – for intentional terrorist attacks and accidental missile launches, for natural disasters and manmade chaos, for doomsday and World War III.

Yet when the calendar hits Dec. 24, NORAD becomes a link between Santa Claus and children around the world. According to press reports, some 1,500 volunteers (many of them civilians) field more than 150,000 calls on a typical Christmas Eve. (Brian Earl’s “Christmas Past” podcast points out that Shoup’s children – now grown – serve in NORAD’s army of Santa hotline volunteers.) NORAD also processes thousands of emails and millions of visits to its Santa-tracking website, noradsanta.org.

All this exists today – all these grownups taking time out of their lives, schedules and missions to help kids soak in the magic and wonder of Christmas – because an Air Force colonel “did the nice thing,” as Van Keuren says. “He could have hung up, but he didn’t … He did the right thing and look what happened.”

What’s most striking about the story that made Shoup (aka “the Santa Colonel”) famous is his humanity, his willingness and readiness to do the right thing, and how living in a free society allowed him to express that humanity and encouraged him to do what was right.

It’s unimaginable that a Soviet colonel – or today, a PRC colonel – would have responded the way Shoup responded. It’s not that Soviet military personnel – or today, PRC military personnel – lacked humanity or a desire to be kind. It’s that the communist system – bent on control and conformity – wouldn’t in 1955 and still won’t in 2021 tolerate such individuality and independence and initiative, such freedom of action and freedom of conscience.

For that matter, it’s hard to imagine a Soviet child ever asking a Soviet military man about Santa. The Russian equivalent of Santa (Grandfather Frost) was banned soon after Lenin’s communist revolution, a step which was logical and inevitable inside the Soviet system. The figures are inextricably linked to a religious celebration – and religion is an enemy of communism. As Karl Marx, the founder of communism, once snarled, “Religion is the opium of the people.” Lenin viewed religion as “a powerful and ubiquitous enemy,” adds historian Paul Johnson.

Indeed, Lenin built a regime that made war against religion, purged those who refused to genuflect to the state, elevated government above all else and laid siege to the soul. By the end of 1918, Lenin’s regime had nationalized all church property. By 1926, the Soviet state had murdered 1,200 bishops and priests, shuttered most seminaries, closed down all but a handful of parishes and banned the publication of religious material. Virtually the entire clergy corps of the Russian Orthodox Church was liquidated or sent to labor camps in the 1920s and 1930s. “By 1939 only about 500 of over 50,000 churches remained open,” according to the Library of Congress.

Similarly, Xi Jinping’s PRC is a place where churches are smashed and followers of Christ are sent to reeducation camps, where Buddhist temples are bulldozed, where Muslim men are packed into freight trains and Muslim women are forcibly sterilized, where religious minorities are sent to concentration camps, where bishops and Nobel Peace Prize laureates die in prison.

Communist regimes take these actions against faith and people of faith because the common denominator of most every religion is that there’s something above, something beyond, something bigger, more enduring and more important than the state. That notion represents a mortal threat to the legitimacy and durability of regimes claiming they have the authority and capacity to do everything, control everything, know everything, provide everything – regimes like the USSR and PRC.

Christmas – even the commercialized secular stuff such as Santa and his reindeer – remains connected to faith. The USSR’s communist system, with atheism as one of its pillars, could not (and in the PRC, still cannot) countenance this. Thus, Grandfather Frost was “unmasked” by the Communist Party “as an ally of the priest,” historian Karen Petrone explains in an interview with Time, and Christmas was outlawed.

Although Stalin allowed the return of Grandfather Frost, it wasn’t to celebrate Christmas. (Christmas trees, for example, were rebranded “New Year’s trees” by the commissars.) In fact, the main purpose was to boost Stalin’s popularity and push communist propaganda down the throats of Stalin’s subjects. As Time detailed after sifting through old newspaper articles, “More than just the giver of gifts,” the Stalin-era Grandfather Frost “was the giver of pro-communist PR.” AP reported in 1949 how the communist version of Grandfather Frost “customarily ends his talk with the question ‘to whom do we owe all the good things in socialist society?’ to which it is said the children chorus reply ‘Stalin.’”

Shoup’s actions during the Christmas of 1955 offer an unplanned, unstaged snapshot of a political system and world view strikingly different from that of Lenin, Stalin and Xi – a system founded on the freedom to believe in God or not. That freedom of conscience – and the companion notion that there is something beyond the reach of the state – makes all the difference. We don’t have to worship in the same ways or on the same days – or at all – to recognize this.

In a flash of cosmic irony and poetic justice, the atheist Soviet Union – one of history’s most brutal enemies of faith and conscience – staggered to its death and expired 30 years ago this month, on Christmas Day 1991.